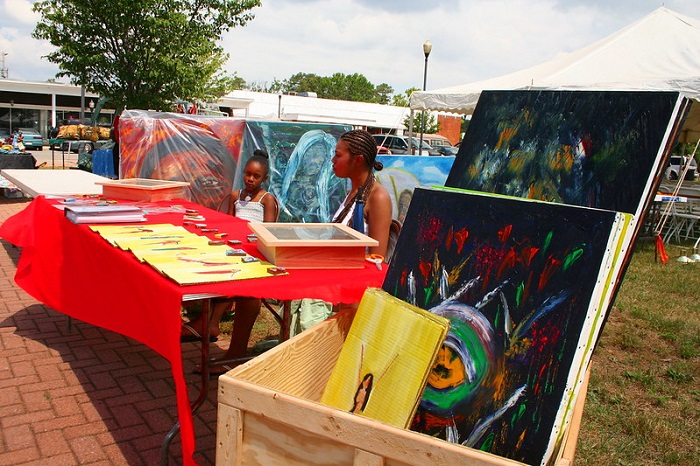 It’s Friday night, and the Nashville Farmers’ Market is bustling. It’s not the usual vendors, though—gone are the baskets of tomatoes and piles of squash. Instead, folks are selling a wide range of products, including cocktails-to-go, beauty products, apparel, and more. Food trucks line the edges of the market, and a saxophone player sets a soundtrack of smooth hip-hop and jazz. On the first Friday of each month, the market’s physical space transforms into the Nashville Black Market—a marketplace composed entirely of Black-owned businesses.

Carlos Partee’s tall frame rises above the milling customers. Partee is one of the co-founders of the Market and the owner of Cashville Etc., a clothing brand that sells apparel highlighting Nashville’s forgotten history. Together with Javvon Jones, who also started his own clothing brand called Can’t Complain Campaign, he’s created something special.

The two of them grew up in North Nashville, in the 37208 ZIP code. About two-thirds of the area’s current residents, including Partee and Jones, are Black, according to census data from 2020. Partee and Jones met in high school through their early entrepreneurial ventures in the fashion world, but later found out they were cousins. In 2018, they were both looking for locations to do pop-up shops for their brands. Every storefront location they found seemed a little off—too expensive, too small, or just not what they were looking for. They wanted to do more than just sell, too, Jones says. “We had a conversation about coming together and doing things for the community along with the pop-up shops, so that’s how we started with the Nashville Black Market.”

From the beginning, it has been clear that Jones and Partee are filling a community need. The first pop-up market they put on in February 2019 had just 15 vendors, but more than 1,000 people showed up. “From that moment,” Partee says, “we knew that we had something.” The market has only grown from there. Since then, more than 380 vendors have participated in the market events, averaging 65 vendors per market. In 2021, the market grossed approximately $205,000 for Black entrepreneurs, despite the COVID-19 pandemic restricting the market to just four events that year.

“I sell out every time. Every single time,” says De’Jenea Shaw, owner of health food company Deej with the Tea. Other vendors echoed this sentiment.

Hailey Wesley, a professional self-taught painter and owner of MWL Masterpieces, heard about the market from a friend, “because I wasn’t doing so well at the other markets,” she says. “And the first night I came here, I sold literally everything, and it was truly amazing.” Wesley also sells through the Shop Black City Tour but emphasized, “Here is where I gross the most money.”

For some vendors, it’s less about making money and more about exposure. Many of the vendors sell mainly online and at pop-up shops. “Online sales can get stagnant month to month,” says Shardae Robinson, owner of Lil’ Lit Books, which sells children’s books and novels that feature Black characters and Black culture. The Nashville Black Market, she says, “Generates a buzz about my business, and it’s an opportunity for me to interact with my potential customers.”

Lea Avery, founder of the game and event facilitation company Just Play Entertainment, notes, “It’s kind of hard to get exposure for your business in Nashville being a Black entrepreneur, so it’s great to have these events once a month to let people know that we are here and we need the support as well.”

For other vendors, entrepreneurship isn’t their full-time job. The market “gives you confidence because you know you can sell,” says Reuben Dobson, creator of an all-purpose spice rub called Reuben’s Dry Rub. “I’m a normal guy just like everybody else; I have a regular job, but I have something that I think people might like. It took me 10 years to have enough confidence to think that I could actually sell it.”

It’s not just confidence that you need to start a business, though; it’s capital too. Often, Black-owned businesses don’t have access to the same opportunities as White-owned businesses—a 2019 report from the Federal Reserve Bank of Atlanta showed that Black-owned businesses have a harder time getting approved for the financing they apply for. As a result, nationwide, only 2.3% of businesses are Black-owned, despite the fact that the U.S. population is 14.2% Black.

Beyond that, there is a long history of discrimination against Black-owned business, especially in a city like Nashville, where the construction of interstate highways destroyed commercial districts in Black neighborhoods and racist redlining policies meant Black people had a much harder time accumulating wealth through homeownership.

As Nashville grows, too, its demographics are rapidly shifting, in part due to rising housing prices.

“Nashville is an amazing city,” says Stephanie Pruitt Gaines, who is in the process of launching her business, Nailed It Myself, which sells peel-and-press nail polish wraps. “I was born and raised here, but it’s changed so significantly, especially in the last five, 10, 15 years.”

Partee seconds that concern. “It’s heartbreaking to see a lot of the places you grew up … or the people you grew up with not here anymore, not being able to stay here due to gentrification.”

Gaines goes on to say that the diversity, in part, is what brings people to a city like Nashville. But “unless we take very intentional steps to ensure that Black people and Black businesses can stay, you’re going to see a totally different Nashville, and a lot of the things that attracted people to Nashville in the first place—the culture, the diversity, the music, the food—people are being priced out of that, and it’s no longer going to be the Nashville that we all actually want to live in.”

Gaines sees spaces like the Nashville Black Market as playing a key role in keeping the city diverse and thriving. “They stimulate the Black economy, which is crucial, but it also creates kind of a cultural and social hub that allows all Nashvillians to really be a part of the rich culture that is here,” she says. “And, you know, owning a business in a city that is growing very, very quickly is one way to make sure that the growth is spread across all people.”

Though increasing the number of Black-owned businesses won’t by itself solve racial inequality in Nashville, it does have the “potential to increase wealth, create jobs, and reduce persistent shortages of essential goods and services in Black neighborhoods, including health care, child care, and food,” as a recent Center for American Progress report put it.

As Jones and Partee work to grow the market, they are taking notes from similar efforts in other cities. In Atlanta, the Village Market provides not only a marketplace, but also serves as an incubation center, offering classes and mentorship to aspiring Black entrepreneurs. In Stonecrest, Georgia, New Black Wall Street is a mall, named for the thriving community that was destroyed in the 1921 Tulsa Race Massacre, that gives Black-owned businesses a brick-and-mortar location. And in Los Angeles, the nonprofit Black-owned and -operated community land trust Sole Folks has a cooperative retail space and an incubator program that helps Black business owners get their projects off the ground.

Partee and Jones are hoping for all of that and more for Nashville. They imagine a future where they have a permanent location where culture and commerce come together. Where, whatever you need, you can go there and get it from a Black-owned business. Where kids can come and see people who look like them, who are from their community, having the kind of success they dream about. Someday, Jones hopes, “when you think about Nashville, you’ll think about the Nashville Black Market.”

The co-founders at the Nashville Black Market know it takes a community to cultivate change; that it’s less about what they alone can do and more about how they can empower the people around them. “People say, ‘Oh, you know, it’s just another market,’ or ‘It’s just another pop-up shop,’” Partee says. “But it’s like, no, we’re putting value into our community.”