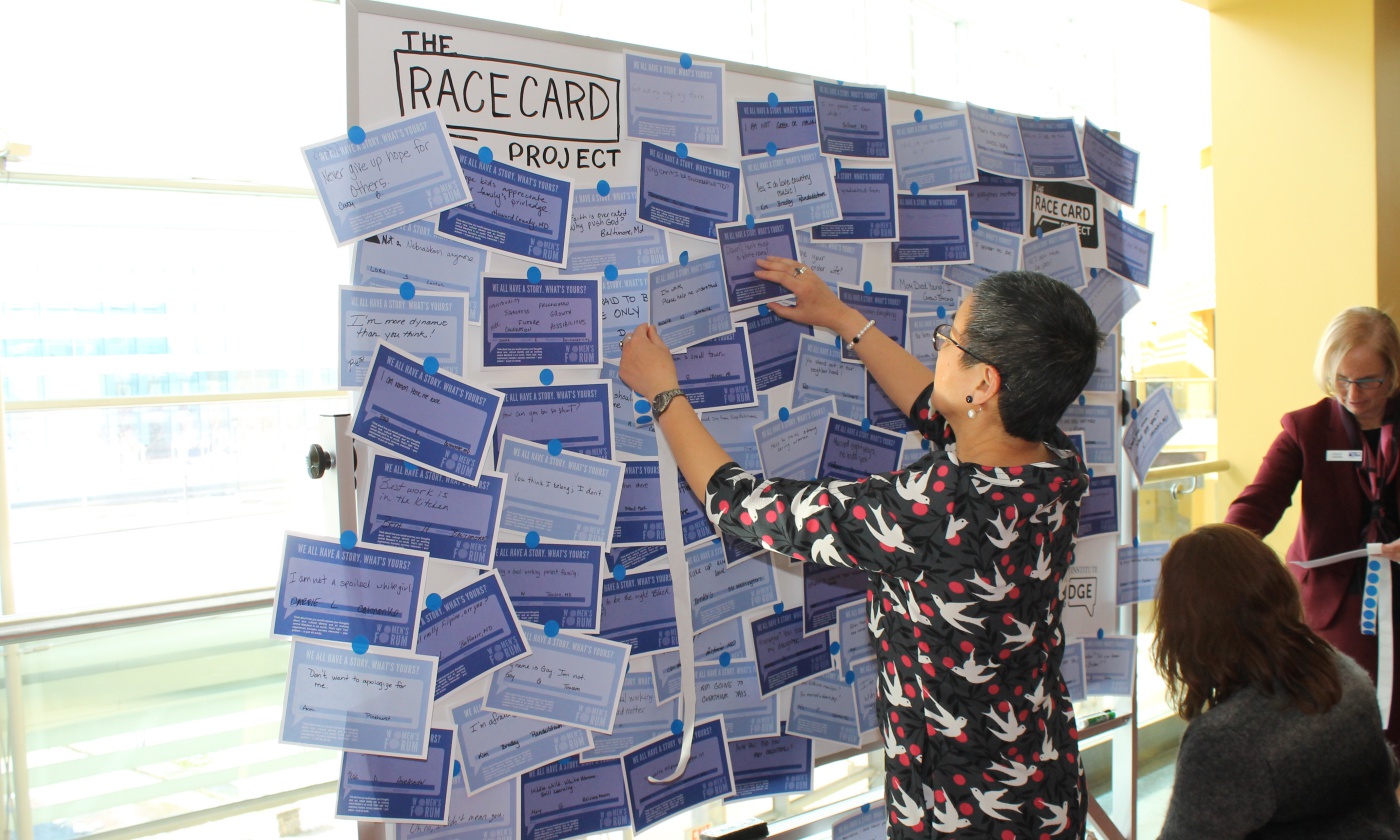 A Way to Talk About Race, 6 Words at a Time

If you were asked to sum up your thoughts about race in six words, could you do it?

Eight years ago, Michele Norris, former host of NPR’s All Things Considered, asked people attending the book tour for her 2010 memoir, The Grace of Silence, to do just that.

The exercise was meant as a conversation starter, a way to engage people on the uncomfortable subject by having them write their thoughts on postcards and then share them with others—directly and online. But Norris’ Race Card Project has become much more.

Businesses, churches, and other institutions have used it to facilitate uneasy discussions around race.

“When I first started asking people to share their little six-word stories on postcards that I had printed, I didn’t know what it would become,” Norris said. “I’ve been surprised at how many people have turned to The Race Card Project as a trusted space to learn about someone else, to share their own story, [and] to use in a classroom or business space so that people can learn about each other or navigate this sort of difficult terrain around race and identity.”

The idea is even more relevant today. Nearly two-thirds of Americans say racism remains a problem in the United States, according to a recent NBC poll. In fact, almost half of those polled say they believe race relations are getting worse.

But there’s hope. Whether due to the number of police killings of unarmed Black people, emboldening of White Nationalist groups, or the introduction of terms like White fragility and microaggressions, the back-to-back presidencies of Barack Obama and Donald Trump have given rise to more public discourse around race.

The Race Card Project is one of several efforts seeking to address racism—whether it’s interpersonal, institutional, or systemic. In over eight years, it has archived over 250,000 six-word stories from all 50 states and more than 90 countries. The stories have come from people of various racial and cultural backgrounds, and across professions.

“I feel invisible, while standing out,” read one essay by Aman Agah of Brooklyn, NY.

Norris, a veteran journalist, has also been invited to facilitate countless discussions—sometimes within theatrical productions or dramatic readings; sometimes at roundtables or group chats. Always, they are a challenge.

“Conversations around race are difficult on a good day,” Norris said. “But at a moment where we see these kinds of political divisions that have strong racial overtones and strong ethnic overtones, it makes that terrain even more perilous.”

“Conversations around race are difficult on a good day.”

At the University of Michigan, which became the focal point for a series of U.S. Supreme Court cases on affirmative action and where a Black student group launched a campaign that brought international attention to the treatment of Black students on campus, the project set the stage for wide-ranging dialogue around race.

Professor and legal historian Martha Jones, who was co-director of the law school’s program in race, law, and history and former associate chair of the Afroamerican and African studies department, had spearheaded a group that brought TRCP to campus in the spring of 2013. Organizers themed the event Understanding Race.

“[It] was in a sense a continuation of the work we’ve always done,” said Jones, who is now at Johns Hopkins University. “But it was also a recognition that we were moving beyond the posture of litigation to think in more interdisciplinary ways and more campus specific ways about race.”

Norris and TRCP worked with the university to design a special postcard for the campus. She attended a series of events, including a public lecture and a pop-up installation on the Diag, the central crossroads in the middle of campus. And she directed a performance of dramatic readings of the race cards. She also met in small groups with the university’s president and executive leadership with students, and with faculty and staff.

They talked about race in their lives, race on the campus, racism as one of the challenges to a campus community.

“Everybody has a past to be reckoned with.”

“Part of her lesson to us was that while we could do large events and we could reach lots of people, some of the work of TRCP was always going to be happening in small settings, where colleagues and members of the campus community can really speak to one another,” Jones said.

The Understanding Race theme was so impactful, that even today members of the campus community continue to post their six-word stories on RCP’s website.

St. James Episcopal and Zion Baptist churches are each more than a century old and separated by a funeral home. But in 2011, their mostly White and Black parishioners crossed the invisible but very present racial barrier between them.

“One day I was walking to the church and passed a Baptist church, where a sign read ‘Formed by freed slaves in 1865,” said Charles Dean Taylor, who was interim rector at the time. “And it occurred to me, I wondered if some of the slaves had been owned by members of St. James.”

While the congregations had shared each other’s facilities in the years before Taylor arrived, he was responsible for bringing the two churches together to specifically talk about race and the history of slavery that impacted them all.

“I had to leave that next year, or I would have tried to make it an annual thing,” Taylor said. But, he explained, the work that was done in that one day over dinner between more than 100 people was a seed planted. “Anytime you gather around food, that’s another great way for people to increase fellowship,” he said.

What Norris gave the congregants was a vehicle, Taylor continued. “There’s a little bit of an awkwardness to it. Some embarrassment on our church’s part. The great thing is she provides a way to get over that to get through that. Everybody has an opportunity to say things about the racial divide. It starts easy.”

But the process was anything but. “I will say, the problems that I had with getting my people there is that they had kind of perceived it to be what they would call political,” said Taylor. “In other words, this is a liberal kind of thing. And so, I had to really do some persuading … some the leaders of the parish worried if they were going to be persecuted, because I think some of the other programs had tended to kind of stick people. And then they’d say, I don’t want to do that anymore.”

That’s not what happened this time. Some who originally pushed back said in the end they were honored by the process.

“Everybody has a past to be reckoned with,” Taylor said. “You’re either going to let that past define you, control you, or put you in a mold or box, or listen to what I think is Scripture or the holy spirit.”

The question is, he said, “can we be freed from that past, and therefore lead a better way? It was a graceful way to enter into those conversations.”

In addition to helping start difficult conversations, the postcards and their backstories also serve as a sort of time capsule, marking specific events: The first Black president, Black Lives Matter, the Muslim ban, understanding of White fragility, and the most openly racist president in recent history.

“I think it has great value over time,” said Norris, who now heads up a program called The Bridge at Aspen Institute, which focuses on race, identity, and inclusion. “I’ve done a lot of high-order research. What I would give to have an archive like this to better understand the lived experience of race and identity from the 1930s, or 1940s, 1960s, or even the 1970s, which wasn’t that long ago.”

“And this project, this crazy project that started on the third floor of my house, I think will provide a unique window for people who are trying to understand the moment that we’re living in right now,” she says.