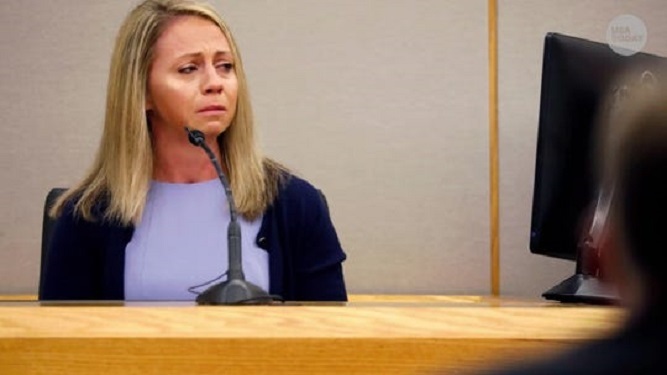 The Mothers Against Police Brutality coalition is demanding an investigation into a Dallas cop who was involved in murdering an unarmed Black man after it was found he helped Amber Guyger destroy evidence.

Dallas police officer Martin Rivera had an affair with Guyger and is her former partner. He was involved in the fatal shooting of a 20-year-old unarmed Black man 12 years ago. Rivera testified during Guyger’s case that he helped her delete evidence in the form of text messages after she shot and killed Botham Jean.

Now the group believes they have just cause to call for his cases, especially the killing of Brandon Washington, to be reviewed, The Dallas News reports.

Rivera shot Washington in the head and leg March 22, 2007, outside a Pleasant Grove convenience store, after a store clerk said he stole candy, according to reports. Washington was killed because he didn’t take his hands out of his pockets fast enough, according to police records The Dallas Morning News obtained.

Antoinette Washington, the victim’s mother said he had his cell phone in his pocket.

“It blew my mind to see him in another case,” Washington said of Rivera. “I knew he was no good then and justice is fixing to prevail because he killed my child for no reason.”

Rivera was not charged with a crime. However, the activists remain hopeful that this turn of events will help the case get reopened.

“Trials like this are extremely important because they lift the blue veil and show us what’s happening in the police department,” said Sara Mokuria, co-founder of Mothers Against Police Brutality founder.

Former Dallas police officer Guyger was convicted of murder in the killing of Botham Jean after a controversial trial that invoked race, police misconduct and legal definitions of self-defense.

Despite expectations that it would take longer, a jury voted in less than 24 hours to convict after prosecutors convinced them that the Sept. 6, 2018 shooting was not accidental, but an incident in which Guyger deliberately opened fire before properly assessing the situation. The 31-year-old ex-cop has maintained that after a tiring shift, she simply went to the wrong apartment in her residential complex, one floor above her own, believing it was hers and thought Jean, 26, was an intruder.

Guyger was sentenced to 10 years.