Donald Trump has sparked uproar online after taking aim at basketball superstar LeBron James, with many social media users calling the US president “racist” and a “bully”.

In a tweet late on Friday, Trump questioned the intelligence of the three-time NBA champion, following an interview on CNN with host Don Lemon, in which James criticised the Republican president for “dividing the sport”.

“Lebron James was just interviewed by the dumbest man on television, Don Lemon. He made Lebron look smart, which isn’t easy to do,” Trump said.

“I like Mike!” he added, referring to NBA legend Michael Jordan, who along with James is widely considered as one of the greatest basketball players ever.

In the wide-ranging one-on-one interview which was first aired on Monday with a repeat broadcast on Friday, Lemon asked James: “What would you say to the [US] president if he was sitting right here?”

James, who signed recently for the Los Angeles Lakers, was being interviewed about a school he recently opened for underprivileged children in his hometown of Akron, Ohio, among other topics.

Reacting to Trump’s tweet, fellow athletes, sports writers and fans jumped to James’ defence and criticised the US president, while Jordan also offered his support.

“I support LeBron James,” Jordan said in a statement to the Associated Press news agency on Saturday. “He’s doing an amazing job for his community.”

American football Hall of Famer Shannon Sharpe tweeted: “It should be beneath the dignity of a sitting US president to take racist shots at Don Lemon and LeBron James.”

“So let me get this straight: Flint, Missouri, has dirty water still, but you worried about an interview about a man doing good for education and generations of kids in his hometown?” he asked the president on Twitter.

Many also drew a comparison between James’ new school for at-risk children and the defunct Trump University, a for-profit educational institution, which was shut down following multiple lawsuits.

Others took aim at Trump’s controversial immigration policy separating migrant children from their detained families, which saw many minors reportedly held in cages at border facilities.

Since taking office, Trump has clashed with several US sports stars, most notably after he called on the National Football League (NFL) owners to fire players who protest during the national anthem.

During a speech in Alabama in September last year, Trump said: “Wouldn’t you love to see one of these NFL owners, when somebody disrespects our flag, you’d say, ‘Get that son of a b**** off the field right now. Out! He’s fired’.”

Trump rescinded a White House invitation to basketball star Stephen Curry, who had said he would “vote” against the planned visit by the NBA champion Golden State Warriors.

At the time, James came to Curry’s defence.

“Going to White House was a great honour until you showed up!” James said on Twitter. 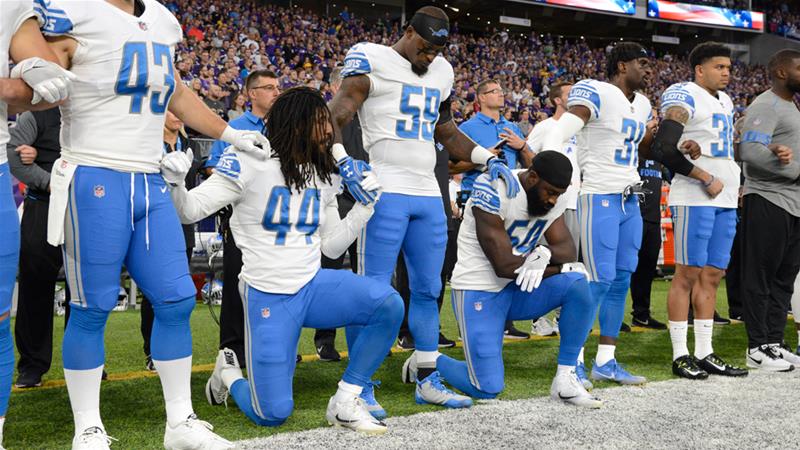 Taking a knee: NFL as a platform for race politics