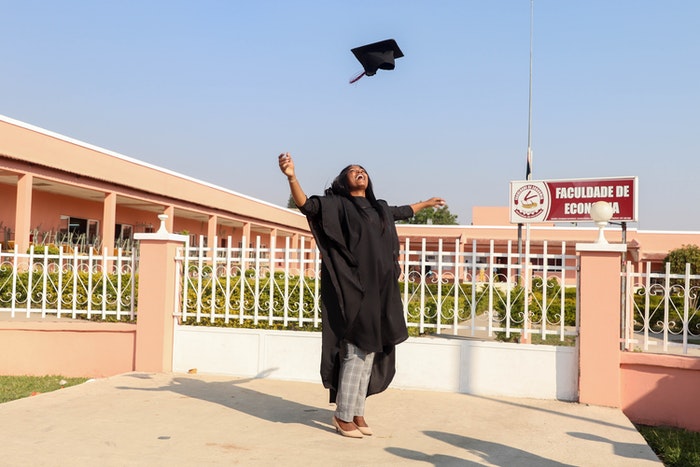 To some, graduation day is just a regular day, walking across a stage dressed in crazy attire only to be handed “a piece of paper” in front of a bunch of people. In my view, those rites of passages are so much more than that, especially for Black and Brown kids. We learned early and often that opportunities to be celebrated or positively acknowledged publicly are often fleeting at best for us in American society—especially when sports or entertainment are not involved.

Unfortunately, because of the coronavirus pandemic sweeping the globe, May and June will be filled with prom and commencement cancellations instead of ceremonies, including my son’s kindergarten graduation. My heart aches for all class of 2020 graduates—from pre-K to graduate school and beyond, very few could honestly say they have not been affected.  I do believe, however, that the sting and sense of loss is that much greater for young students of color, especially those in high school or college.

This is why we must do what we can to celebrate the graduates in our lives—especially those of color—in whatever way feels safe and special.

Instead of being celebrated, many Black and Brown students often feel castigated in American society.

I remember my graduation day like it was yesterday. Yes, even two decades later. I woke up that morning to find a half-dozen of my relatives sprawled across the tiny Atlanta apartment that I shared with my mother. They’d crashed wherever they could after a long night driving from New Orleans, to ensure that they would not miss even a millisecond of what would be a monumental moment in my then 17 years of life.

After a late lunch, I slipped on my oh-so-’90s white chiffon suit, fluffed my hair, applied my signature electric-red lipstick and next came the shiny scarlet polyester cap and gown to match. On the way out the door, we briefly posed for pictures. Then came the first round of tears, when my dad surprised me with a gift—my first car.

From there we headed to the Atlanta Civic Center and met more of my family and friends. There I lined up with my fellow classmates, nervous all the while about my speech, which would open the evening ceremony. A video recording would later confirm the tears my family and friends shared, passing around tissues among themselves, as I flawlessly delivered my recitation and later received an award for best all-around language arts student.

Afterwards, I felt every bit a bona fide celebrity strutting the red carpet, as loved ones jockeyed to take photos of me and with me. Every few minutes, a different classmate would emerge from the crowd for an impromptu hug. Nothing will ever fully describe the pride I felt as my grandparents beamed and gushed at the sight of that diploma in my hand. As African Americans born and raised in the Jim Crow South, I knew their feelings were so much bigger than me.

These special moments matter and even more so for youth who often feel profiled, targeted, limited, misunderstood, and disregarded.

You see, being Black, Brown, and young in America too often means being forced to navigate a bunch of unsolicited and unfair labeling and treatment that many others—because of skin color, economic status, or some other arbitrary circumstance—are often spared. Instead of being celebrated, many Black and Brown students often feel castigated in American society. For them, racial profiling, stereotypical imagery, economic and educational inequities, and just an overall sense of low expectations are an unfortunate reality of life.

Research also confirms that minority youth tend to disproportionately live in poverty and also often witness and/or experience more physical violence and are more often suspended and disciplined more harshly in school than Whites for similar behaviors. They also often report experiencing daily microaggressions and facing trauma, including racial trauma, more often and at younger ages. For example, in a study released this year, Black teenagers 13 to 17 reported on average experiencing five racial incidents daily. The consequences of these consistent negative experiences often harm their mental health and, many times educational outcomes too; as African American and Latino youth between the ages 16 through 24 also have the highest high school dropout rates nationwide, according to the National Center for Education Statistics.

Graduations provide a time and space to feel seen, validated, loved, appreciated, and yes, celebrated, in some cases for the first time ever.

Adding to that, popular culture rarely provides any relief. For example, a 2012 study found that television watching harmed Black children’s self-esteem. The researchers noted that the disproportionate number of Black men and boys being “criminalized” on TV, contributed to lower feelings of self-worth among Black youth. The same study, interestingly, concluded the opposite for White boys; they reported having higher levels of self-esteem from television watching; largely because of the plethora of White male characters portrayed on TV as powerful, educated, employed in prestigious occupations, and with attractive spouses.

I am in no way suggesting that one ceremony or a party held in one’s honor in any way erases the effects of all of the “isms” many youth of color regularly face. I do, however, believe that, for many, proms, graduations, and even quinceañeras provide a much-needed escape from the norm—albeit a brief one; an opportunity to feel special, coveted, and celebrated.

Simply put, in the sum of one’s life, these special moments matter and even more so for youth who often feel profiled, targeted, limited, misunderstood, and disregarded. It is hard to put into words how it feels to saunter across that stage with that diploma in hand, as your family goes bonkers in the audience cheering you on in the most unrestrained and animated way possible, of course.  Graduations, much like birthday parties and bar/bat mitzvahs, provide a time and space to feel seen, validated, loved, appreciated, and yes, celebrated, in some cases for the first time ever. Graduations, for many, are that one last hurrah before the realities of adulthood and the real world, such as employment discrimination, pay disparities, and mass incarceration, set in.

Of course, some of the 2020 grads might eventually get another shot at experiencing a real—not virtual—graduation ceremony. However, we should not gloss over the fact that these canceled graduations are yet another cruel coronavirus casualty that, much like the virus itself, is likely hitting Black and Brown communities extra hard. One viral Facebook post perhaps put it best, noting that the “cancellation” of in-person schooling has not been “a vacation” for many class of 2020 students; it has been valuable time lost with their friends who may never be together again, possibly forever.

Amid this unprecedented global pandemic that has robbed them of so much, host a virtual party or a surprise social distancing parade of cars for your graduate, or send a gift or a personal card or handwritten note of encouragement. After all, it just may be what they’ll need to stay encouraged for many years to come.