Housing in Chicago: Pushing out the poor?

Geoff Smith: Low-income areas are losing affordable housing due to decades of economic disinvestment and discrimination.

Newly sworn-in Mayor of Chicago Lori Lightfoot ran on a campaign that promised change for every day Chicagoans. Pursuing office as an outsider without decades of connection to the Chicago political machine, Lightfoot pledged to address Chicago’s growing housing affordability gap.

Now in her first days as mayor, Lightfoot has appointed Marisa Novara to head Chicago’s Department of Housing. The department will operate as a standalone government entity for the first time in 11 years, a decision that was made during the final months of former Mayor Rahm Emanuel’s administration. Novara comes from the Metropolitan Planning Council, where she headed the Cost of Segregation initiative and has advocated for proposals that would address the housing affordability gap across the city.

Perry Starks, 61, is experiencing the challenges of that affordability gap firsthand. A landscaper for the Chicago Park District, Starks has lived in Garfield Park, a low-income area on the West side of Chicago, his whole life. If rent prices continue to rise, he may have to move. 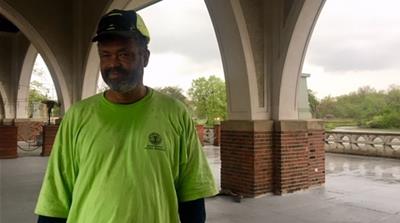 Like many Chicagoans, Perry Starks is having a hard time finding a home he can afford [Anne Bouleanu/ Al Jazeera]

“I’ll stick it out as long as it’s in my safety zone, so to say, to be able to pay for it,” Starks told Al Jazeera. “I kind of like the area, but I know it’s probably going to change in a few years. I’m comfortable where I’m at now, but if it goes up a few more dollars, I’d have to start looking and investing somewhere else.”

Chicagoans like Starks are being pushed out by people with a taste for more luxurious homes. The heart of the Chicago metropolitan area – Cook County – has lost more than 15,000 two- and four-flat buildings from 2012 to 2018, according to a report by DePaul University’s Institute for Housing Studies (IHS).

Building owners are demolishing small multi-family buildings or gutting and converting them into single-family homes. This is one of the reasons why the number of affordable living spaces has dropped more than 10 percent since 2012.

These conversions are popular in rapidly gentrifying, trendy neighbourhoods such as Logan Square and Humboldt Park, where Stephanie Iverson, 23, lives and works as a nanny. She’s currently searching for a new apartment in Humboldt Park.

For now, Iverson and her roommate live in a two-bedroom apartment and pay a total of $1,250 in rent each month. Iverson is paying 45 percent more than what is considered affordable. The IHS defines the affordability gap as the difference between the number of renters making less than 150 percent of the national poverty level ($37,641 each year) versus the number of rental units available for $940 each month, or 30 percent of an individual’s income.

“The problem I’m finding is that even places that are more expensive than the place we are right now are smaller,” Iverson said between apartment showings. “I get decent pay but still the majority of my paycheck goes to rent. Probably like 75 percent. It’s tough.”

The affordability gap squeezing the nine-and-a-half million people who live in the Chicago area is part of a global urbanisation wave. People in similarly sized cities like Bogota, Colombia, Johannesburg, South Africa, and Lima, Peru are also facing shortages of affordable housing options as migration from rural to urban areas continues.

Today, 55 percent of the world’s population lives in urban areas. By 2050, that figure is expected to climb to 68 percent, a UN report predicts.

As cities continue to grow, the fight for affordable housing is predicted to take a toll on the overall quality of life in urban areas. By 2025, 440 million people worldwide may live in substandard housing, or only be able to afford acceptable housing if they sacrifice on other basic necessities such as healthcare, according to an analysis by management consultancy, McKinsey & Co.

Propping up the rich, letting the poor fall

The contrast between rapid development and a lack of affordable housing is glaring in certain parts of Northwest Chicago. Take Logan Square for example: From 1980 to 2017, a majority of its residents were Latino. It now has a slight majority white population, a WBEZ analysis of census data found. As young, white professionals with greater financial means move in, some lower-income Latinos have had to leave the neighbourhood, unable to afford increased rents, even as middle- and higher-income Latino families remain in the area as demographics shift.

Developers in this area have converted former churches and banks into luxury apartments and constructed multi-story, condo-ready buildings that offer upscale amenities like gyms and rooftop patios. 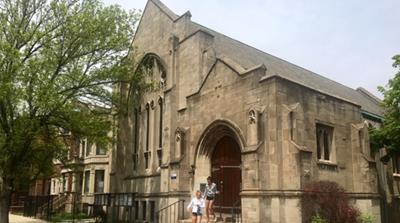 Meanwhile, says Geoff Smith, Executive Director of the IHS, those in low-income areas are losing affordable housing options due to decades of economic disinvestment and discrimination in areas that are largely black and Latino.

“What has happened in those areas is a lot of properties have been abandoned,” Smith said. “Afterward, they’re demolished, and so you lose that supply. When you lose those units, there’s not a mechanism to replace those affordable units. The loss of those units has a lot of impact not just today, but also in 20 years as those units disappear.”

Preservation is the first step

Gregory Johnson, 57, used to live in Uptown, an area on the far north side of Chicago which has a large low-income population. He lived there for five years until rent became too expensive.

Alternating between working as a seasonal employee for the City of Chicago and holding temporary jobs, Johnson brings in about $1,000 a month. Unable to keep up with rising prices in Uptown as rent climbed towards $600 a month, he moved to the Westside to live with his niece in the Cragin neighbourhood, where he pays $450 a month.

He says that in Uptown, he saw low-income renters not just leave the neighbourhood, but also lose their homes, eventually ending up living on the street.

“I would see them in a building one day, then I’d see them out on the streets the next,” Johnson said.

As Lightfoot enters office this month, he hopes she’ll address the growing housing crisis, particularly for low-income individuals. Newly appointed Department of Housing head Marisa Novara has also made housing for low-income residents one of her priorities, calling for changes in a public voucher programme to make renting more affordable.

“There needs to really be a standard,” Johnson said. “I see a lot of homeless people – people who have a problem with the rent. [The city] needs to get the budget right and help.”