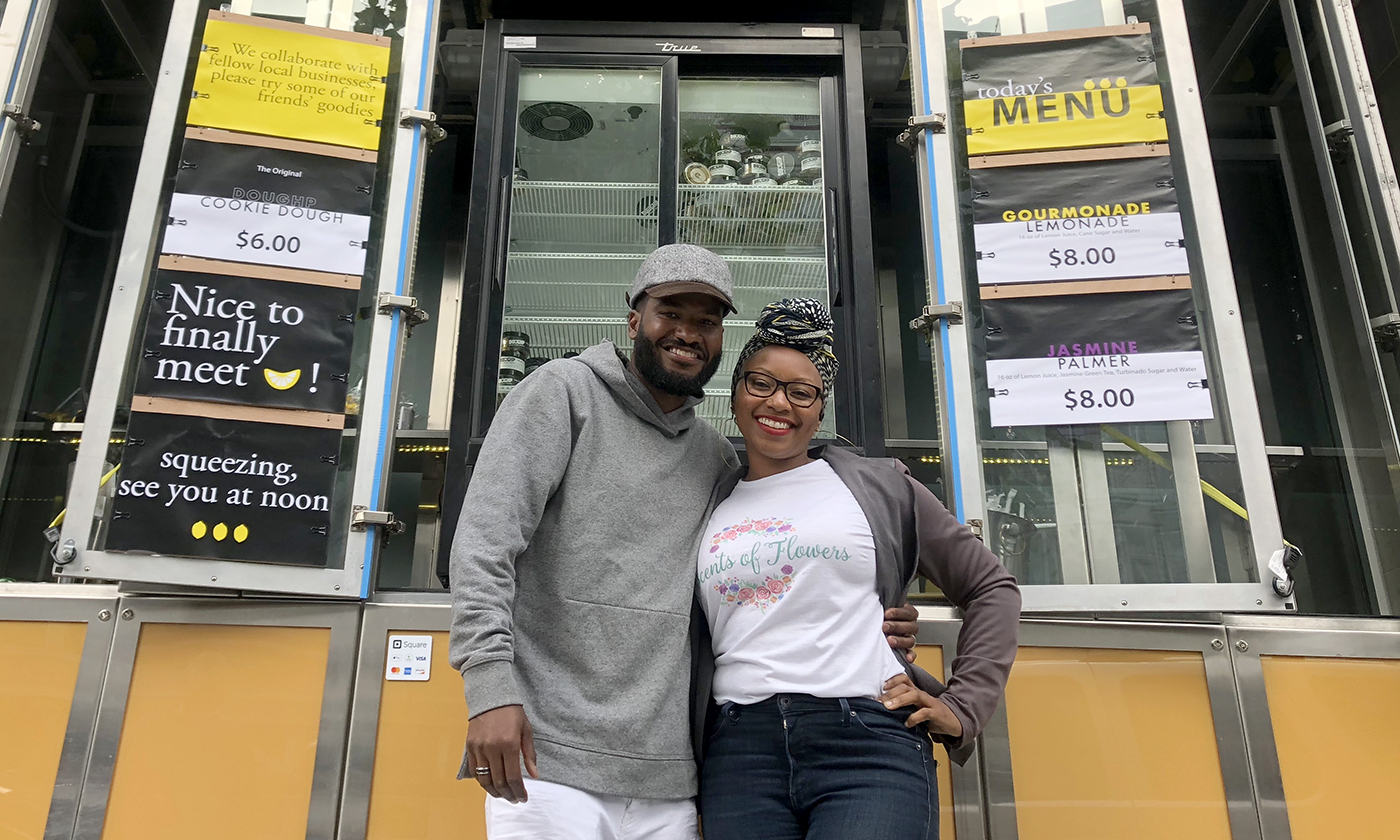 Richmond, California, native April Fenall didn’t grow up with aspirations of becoming an entrepreneur. But upon moving from Sacramento back to the Bay Area in 2015, she couldn’t find work. A past conviction—even though it had been expunged from her record—and severe scoliosis made it difficult to find gainful employment. So she became an entrepreneur out of necessity.

“I wasn’t able to show up as my complete self,” Fenall said, referring to her struggle to integrate into the workforce. “And I made an assumption that other people were probably encountering the same thing, of having all of these different identities that make up a whole person but not being able to show up as that whole person because of embarrassment or judgment.”

Fenall realized she had the potential to become a business owner and to hire others struggling to secure steady work. But she lacked the capital necessary to get started. The San Francisco Bay Area has the highest cost of living of all large metropolitan areas in the U.S. The median price of a single-family home in San Francisco sits at nearly $1.6 million, while the median monthly rent is $3,500—the highest in the world.

But this year, Fenall launched her delivery service, Piikup, with the assistance of a loan from the Runway Project Oakland, a nonprofit incubator that provides funding and a support network for Black entrepreneurs looking to launch and sustain successful businesses. The Runway Project offers small business owners five-year, collateral-free loans of up to $25,000. For the first 18 to 24 months, depending on the size of the loan, repayments are interest-only at 4 percent. This is so that borrowers can build a steady stream of revenue during the initial startup period. Payments increase to include the principal afterward, when a company would be generating more revenue. There are no penalties for paying off loans early.

Runway Project founder Jessica Norwood describes the initiative as a response to generations of racist policies, such as redlining and housing discrimination, that has deprived Black communities of the wealth collectively maintained by White people.

In the 2017 report “The Road to Zero Wealth,” researchers from the Institute for Policy Studies predicted that if the racial wealth divide remains unaddressed, Black household wealth—defined as the sum of one’s financial assets rather than income—will fall to zero by 2053, while White household wealth is projected to rise to $137,000 by that same year. The current median net worth of White families is more than 12 times higher than that of Black families, and that disparity widens by nearly 69 times when durable goods such as electronics, cars, and furniture are removed from the picture.

“When you see those numbers, you realize in short order that [Black people] don’t have the kind of friends and family that can put capital into their businesses,” Norwood said. “It starts to create this narrative that Black businesses aren’t as strong competitively as other businesses and that the entrepreneurs aren’t prepared enough.”

Business owners typically lean on a network of family and friends for startup capital.

One essential detail often left out of the entrepreneurial narrative, Norwood says, is that business owners typically lean on a network of family and friends for startup capital. That financial support system isn’t as readily available to Black entrepreneurs as it is to groups with more collective wealth.

The Runway Project, which was founded in 2016, has now loaned to a dozen business owners—ranging from chefs to web designers—for its pilot program. The project spent its first year raising philanthropic donations and investments, many of which were made in the form of $500-minimum certificates of deposit opened with Self-Help Federal Credit Union, a community development financial institution.

CDFIs are private financial institutions that provide affordable lending to underserved and low-wealth communities. Self-Help’s client base is 75 percent people of color with a significant portion living below the poverty line, according to investment associate Annie McShiras. CDs for the Runway Project mature after five years, earning between 1.8 and 2.6 percent interest. The deposits’ principal goes toward the Runway Project’s loans for business owners.

Though the lending protocol for the Runway Project outwardly mirrors that of applying for a standard bank loan, borrowers’ credit ratings have no bearing on their eligibility for a loan. Defaulted loans are not reported to the credit bureaus and all losses are recovered from Runway’s collateral fund. This way, Runway’s borrowers don’t have to put up their own assets as collateral.

“That allows for an entrepreneur to be the great entrepreneur that they can be without that being involved in all of this,” Norwood explained. “There’s already a lot of trauma inside of not being able to repay something in general, and it isn’t the way we’d like to be in community with folks.”

About 80 percent of Black business owners reported a lack of financial resources as the number one challenge to successfully launching and operating a business.

Kate Poole, a 31-year-old investment adviser and early Runway Project donor, got into local investing work a decade ago after inheriting wealth. She, along with a larger movement of other rich millennials, is aiming to redistribute the top 1 percent of wealth by putting capital into organizations working toward economic justice.

“At first, I was just divesting from mining companies or Exxon and these other extractive industries,” she said. “I thought I had it figured out that I was going to move my money off of Wall Street and onto Main Street.” But then, after she attended a Resource Generation conference, Poole said, she “started thinking about the history of wealth accumulation with a reparations lens and what might be owed to communities that wealth has been extracted from.”

Poole and her business partner recently opened Chordata Capital, an investment advisory firm that works with people who want to explicitly invest in racially and economically conscious enterprises. The enthusiasm to start such investment portfolios exists, Poole said, but many wealthy people need guidance regarding how and where to make the biggest impact. For her, supporting initiatives that place capital directly into the hands of those who need it is pivotal.

Ariana Marbley prepares a bouquet of flowers in Jack London Square in Oakland, where small business owners can sell goods and services every second Saturday of the month. Photo by Rhett Jones.

About 80 percent of Black business owners surveyed by Guidant Financial in 2017 reported a lack of financial resources as the No. 1 challenge to successfully launching and operating a business. Runway Project organizers are looking to expand the program into four more markets within the next year, while continuing to fund Oakland: Chicago, the Washington, D.C., metro area, Atlanta, and Memphis.

After being denied loans by four banks, Ariana Marbley, 33, almost gave up on her dream of opening Esscents of Flowers, a mobile floral retailer.

“It felt like the business was going to fail,” Marbley said. “I got into a little bit of a funk and just felt like maybe it’s not meant to work.”

“The fact that I’m Black and doing business in a predominately White neighborhood, I feel that. It’s just a part of being there.”

Before the Runway Project, Marbley and several other Runway participants worked on business plans and marketing strategies with Uptima Business Bootcamp, an Oakland based mentorship network for up-and-coming entrepreneurs. Though it was clear that she had a good shot at finally getting the support she needed, the prospect of actually becoming a business owner was intimidating.

“It took me until the deadline of the application to turn it in because I was afraid that it could actually work—like this could actually become a thing,” Marbley said. “As an entrepreneur, you feel like you’re alone a lot of times. You’re faced with making all of the big decisions with your business, and they’re just there to remind you that you don’t have to do it by yourself.”

Ariana Marbley and her niece Za’Ryah Woods prepare flowers to sell in Jack London Square in Oakland. Woods is the first of many young women Marbley hopes to train in the business of floristry. Photo by Rhett Jones.

But while the Runway Project has cultivated a strong sense of camaraderie and support within its network, entrepreneur and Runway Project borrower Vicktor Stevenson says there are still some outside challenges. Mere days after opening his craft lemonade stand Gourmonade in San Francisco in the summer of 2018, Stevenson was confronted by police as he tended to the store’s security system. Someone in the neighborhood had erroneously reported a burglary.

“The fact that I’m Black and doing business in a predominately White neighborhood, I feel that. It’s just a part of being there,” Stevenson said. “There are a ton of people that don’t like the fact that I’m there but that’s just going to have to be their problem.”

He also added that he knows other Black entrepreneurs who avoid publicly associating themselves with their businesses, lest they alienate clients. Furthermore, Stevenson frequently contends with purportedly would-be customers criticizing his prices.

“The same people that walk on by my $8 lemonade stand will go down the street and pay $20 for a salad,” Stevenson said. “So the money’s not the issue—it’s whatever they believe in.”

But notwithstanding the naysayers, Stevenson has remained focused on building Gourmonade up to its full potential. Now that the logistics to getting started are out of the way, he’s looking into ways to maximize the business’s social impact on the surrounding community.

“You know how people are like, ‘Oh, let’s raise money for the dolphins?’ I want to raise money for kids in the neighborhood. Especially the children of families that have been affected by police brutality.”