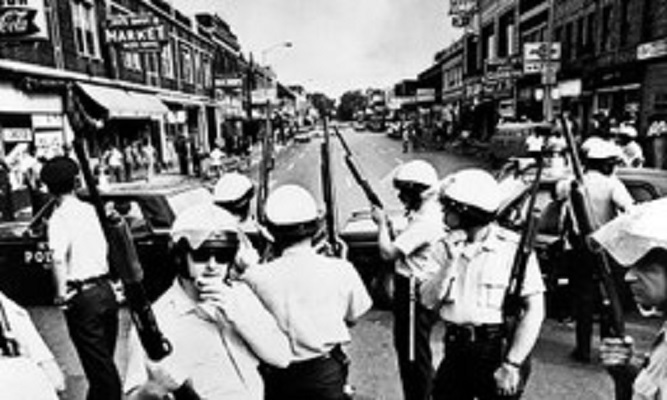 July arrived steamier than ever with potentially deadly heat waves. The month was followed by equally high August temperatures—and, alas, the heat of Augusts past, which generations of African Americans have yet to escape.

Historically, racism has aggravated the summer heat with mayhem, trauma, and even death for Black people. The onslaught of slavery is but one calamity of note.

Enslaved Black bodies—considered and treated as property—performing fieldwork from the dawn of day till the sun receded, on meager sustenance, with unsuitable provisions, beneath the crack of a whip was only the beginning. All else that followed forced servitude was par for the course, so much so it’s a wonder Blackness—racial identity, culture, and pride—persists.

The New Orleans Massacre occurred 153 years ago on July 30. Its intent was to prevent Black delegates and veteran union soldiers from gathering for the Louisiana Constitutional Convention. Then-Mayor John T. Monroe and a group of white rogue cohorts, including New Orleans police officers, took to firing on Black attendees. According to varying reports, at least 38 African Americans were murdered in the barrage of bullets and beatdowns.

A political cartoon portraying the New Orleans Massacre of 1866 with President Andrew Johnson depicted as a king. Photo from Universal History Archive/UIG/Getty Images.

In 1919, “The Red Summer” grew as a series of race riots erupted in several cities across the United States, many of which were provoked by angry white mobs that terrorized Black communities. The Chicago race riot was ignited by the death of a Black swimmer who was stoned in the water and subsequently drowned for such an offense as accidentally treading into the “whites only” swimming section of the ocean. Black citizens fought back. By the time it was all over, 23 Black people were dead along with 15 white people.

In August 1955, 14-year-old Emmett Till was beaten beyond recognition and tossed into Mississippi’s Tallahatchie River with a bullet in his head and a fan blade tied to his body. A white woman, Carolyn Bryant Donham, lied about the child groping her. Mamie Till Bradley exercised peculiar grace and reserve in the face of her son’s death and decided on an open-casket funeral to show the brutality of racism. Emmett’s death became the catalyst for the nonviolent civil rights movement of the late 1950s and ’60s.

The Detroit Rebellion of 1967 was triggered by the heavy policing in Black communities by mostly white law enforcement. An uprising broke out one very hot July morning after police raided an after-hours establishment. Having grown tired of the police’s treatment, Black bystanders retaliated. A brick thrown through the window of a police cruiser set off four days of rioting. A state of emergency was declared and the National Guard was brought in. About 43 lives were lost, primarily at the hands of police.

Children looking at the remains of a building destroyed by rioting during the Detroit Rebellion of 1967. Photo from Bettmann/Getty Images.

Aug. 9 marked 22 years since Abner Louima found himself in a heated altercation that led to his arrest and a physical and sexual assault by four New York City officers. Inside a New York precinct bathroom, officer Justin Volpe violated the Haitian immigrant with a broken broomstick, causing damage to his rectum, colon, and bladder. The memorial date also marks five years since the death of Michael Brown Jr., who was shot, hands raised, by a police officer in Ferguson, Missouri.

It has been three short years since Alton Sterling wrestled for his life against the imminent threat of death by a Baton Rouge police officer. His name, along with Philando Castile’s, joined Eric Garner, John Crawford III, and Brown Jr.’s on a long list of Black citizens killed by police in the steamy summer months.

The visual details of each tragedy bled across news and social media, creating digitized trauma noir. And those on the ground in Ferguson—on West Florissant Avenue and Canfield Drive, where Brown Jr.’s blood-stained body lay on the hot asphalt for four and a half hours in 80-degree heat—certainly experienced trauma theater in real time. The horror and outrage felt by many turned into demonstrations and protests that lasted 15 days.

Burning tiki torches abound, the Unite The Right rally that took place in Charlottesville, Virginia, in August 2017 was a grand indication of how white nationalism in this country could and eventually would spread like the infectious disease that it is, directing its hate beyond Black people. White supremacy has heated up and boiled over in this Trump era, affecting other ethnic groups and white people alike. The mass shootings in El Paso, Texas, and Dayton, Ohio, were terrorist acts predicated on racist rhetoric of the day.

On Aug. 4, El Paso shooter Patrick W. Crusius, 21, targeted Mexicans. According to his manifesto, Crusius was resolving the “Hispanic invasion of Texas,” the New York Times reported. On Aug. 5, Connor Betts, 24, shot and killed nine people in Dayton, six of whom were Black, due to an alleged obsession with violence and guns.

Local Abel Valenzuela meditates in front of the makeshift memorial for shooting victims at the Cielo Vista Mall Walmart in El Paso, Texas, on Aug. 8. The El Paso community is still reeling from the trauma of the mass shooting that left 22 dead and dozens injured. Photo by Paul Ratje/AFP/Getty Images.

The news of these current atrocities are all too familiar to Black Americans. Most generations from slavery till now can identify hellacious acts against the Afro race and other people of color.

By default, Black people brace themselves even when they are not the target of pointed violence and racism. It’s a behavioral practice many of us have tragically become used to, as well as developing necessary coping mechanisms to navigate the heat of white supremacy.

This incessant yet remarkable resilience brings about a pressing question: How do Black people cope with the heat of extreme violence, terror, and trauma?

Five African American activists and creatives who’ve either organized movements or have written about them, weigh in with their own ways to deal.

I center Blackness in everything I do. It’s the only way to cope. I shine a light on my people in my work—whether that be with my imprint, which centers Black people writing and illustrating Black stories, or my TV show or podcast, which do the same. I tried getting angry—yelling to the heavens and begging people to see that the system is rigged.

But the people who have the system rigged are to blame. And they’re not interested in doing right by us. That is their problem—their condition to grapple with. So I find sets and hang with my people—go out for cocktails, travel, date, attend concerts, live my life. We have to get down to the business of living and loving ourselves. It’s too hot out here for anything else.

Summers are always lonely and filled with unexpected death, so, honestly, I drive a lot and pray a lot and write a lot. It’s all I got.

For a while, I’ve been stuck somewhere between seeing this country as a horrible place for Black people yet still feeling a tremendous responsibility to be present to the “realities” of Black life. Truthfully, I’m checked out. I’m not as actively engaged on social media in talks about the dangers that plague our people, and I rarely post about police shootings or Black death in any capacity. I’ve never been confused about where we are, what we’re facing and who we’re up against. I get it. We get it. We’re way behind enemy lines.

However, I’ve come to realize that the activist work I’ve always believed to be my life’s calling hasn’t helped me get out of my own way.

As a filmmaker, I’ve begun to search myself for the stories that aren’t rooted in Black folks needing to escape the heels of white supremacy. I’ve strived to imagine a world where we’re free and self-determining, and thus far it’s been more difficult than I care to admit. This concerns me more than anything: If we can’t imagine another world, how can we get there.

I’ve begun to check in with myself. The breakthroughs I’ve had in recent years have come about as a result of committing to a self-care routine: prayer, yoga, meditation, diet, right-mindedness, and living with intention. This work has cleared some of the debris of generational trauma—be it personal or systemic. This inner work has cleared the way for my imagination to find its way to another world. This is how I’ve learned to cope, to deal, and to heal.

My cameras are my escape from the harsh realities faced by Blacks in this country. Like a kid who finds himself or herself in their secret hiding spot, I tend to get lost within the viewfinders of my cameras and reframe my reality to one where I don’t notice the harshness as much. And in the case of my viewfinder-less pinhole camera, I simply allow the camera to guide me on visual journeys while anticipating what will be revealed once the film is developed.

I often imagine film negatives filled with scenes of joy, exuberance, calmness, and overall peace as a counter to what is happening in reality.

During the summer, I find that there will inevitably be deaths, assaults, and violence within the community. I am fortunate enough to have a lifestyle that keeps me somewhat removed from the “realness” of the heat. I live in an affluent in-town neighborhood in Atlanta, travel for work, and tend to not go outside of my community and family unless I’m traveling. I have taken a complete social media break simply to decompress from the enormity of the violence, misogyny, racism, and ugliness.

Like racism, violence, and white supremacy, heat is inextricable from the Black American experience. The summer season intensifies the degree. Despite the fervent, piping, scalding temperatures and our daily resistance that will one day manifest itself in a world where we are not receptacles for violence, Black folks have, do, and will continue to endure.