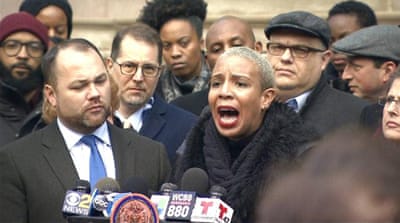 NYPD drops charges against mother after outrage over arrest video

The video showed a 23-year-old mother from Brooklyn being arrested while clinging to her baby.

The New York Police Department (NYPD) has dropped charges against Jazmine Headley, a 23-year-old woman from Brooklyn, after video of her being arrested while clinging to her baby brought widespread criticism.

There were protests in New York in support of the woman whose one-year-old baby was pulled from her arms by the police officers. A video of the incident was posted on Facebook that led to a barrage of criticism.