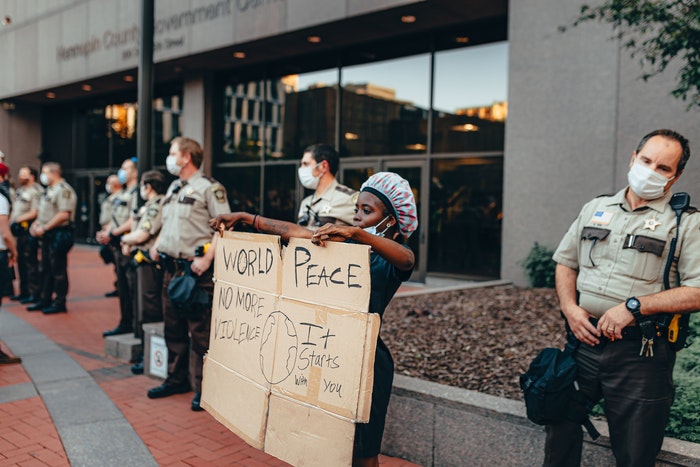 Police violence in the United States: what lies behind the ‘bad apples’ narrative

The May 25 video of George Floyd’s death sparked outrage and demonstrations across the United States as well as around the world. The direct responsibility of police officer Derek Chauvin is reflected in the charges – on June 3 were upgraded to second-degree murder,
while three other officers were charged with aiding and abetting Floyd’s death. However, the interpretations of what lies behind Chauvin’s behavior and the underlying racism differ greatly, and frequently along political lines.

A frequent interpretation is that George Floyd’s death was an isolated incident by a “bad cop”. This is the prevalent view in the Trump administration and more generally among conservatives. It was clearly expressed by Robert O’Brien, the president’s National Security Advisor who on May 31 said on CNN’s State of the Union program:

As legal scholar Chiraag Bains has shown, the “bad apples” narrative has been ascendant in the last few years and it has shaped both court decisions – including the Supreme Court – and federal policies. In the Trump administration, it has been the basis to justify the decision of the Department of Justice under attorney generals Jeff Sessions and William Barr to pull back from civil rights prosecutions or investigations related to accusations of police misconduct.

This pro–law enforcement view has a particular appeal to conservatives because it emphasizes the theme of order and control, a traditional motif in conservative political philosophy and one used by Donald Trump in his handling of the demonstrations.

From law and order to just order

In the conservative paradigm of “law and order”, social order and hierarchy can prevail over the enforcement of the law and the implementation of justice. This partly explains a lack of accountability in the police, as Jill McCorkel, professor of sociology and criminology at Villanova University, has observed.

President Richard Nixon, who served from 1969-1974, is a clear example of a politician taking such a stance, as is the current occupant of the White House, Donald Trump. He has openly and repeatedly given complete, unquestioned license to the police, including in a 2017 speech to a law enforcement organization. The same year, Trump pardoned Arizona sheriff Joe Arpaio, who had been convicted of numerous misconduct charges, including criminal negligence and abuse of suspects in police custody. This focus on order and control – as symbolized by the police forces – at the expense of justice was highlighted on May 28, when the president tweeted “when the looting starts, the shooting starts”. While the president has denied that it was an implicit warning that the police, military or private citizens use weapons against protesters, the phrase has a long and charged history.

The “bad apples” narrative is also appealing to conservatives because it focuses on individualism and personal responsibility as opposed to a universal view of morality and society. Scholars have pointed to this as one of the reasons behind the demise of the “collective right” interpretation of the Second Amendment – that it intended to guarantee the right of state militias to bear arms rather than individual citizens. More recently, this narrative has also been used against the right of states and cities to impose lockdowns during the Covid-19 health crisis.

The “bad apples” narrative has been ascendant since the shift from the institutionalized and explicit racism of the pre-civil rights era to more subtle forms of racism today. Following the election of Barack Obama in 2008, many Americans hoped the country was entering a post-racial, color-blind era, where African Americans would achieve racial equality.

The subtlety of today’s racism is perfectly illustrated by the situation of Minnesota, a state known for its progressive traditions and openness. The slogan “Minnesota nice” reflects the perceived mild manners of the inhabitants of the state, which in 2019 was ranked the second best to live in in the United States. The Twin Cities of Minneapolis and Saint Paul are relatively prosperous economically, and articles have spoken of the “miracle of Minneapolis”.

Yet behind the veneer lies a different reality for minorities: the Twin Cities are ranked the fourth worst place for black Americans, whose average income in real terms is lower now than it was in the 1970s. At the same time, the economic situation of whites has steadily improved since the 2008 crisis. Minneapolis and Saint Paul also have the lowest homeownership rate for African-Americans in the country.

The low rate of black home ownership is in part the result of a form of housing discrimination called “racial covenants” that are often considered to be “Jim Crow of the North”, a practice that persisted until 1953. Property ownership is a central factor in the accumulation of wealth over generations, and the systematic resistance to black families buying homes is one of the key reason for their precarious financial situation today. In the 1980s and 1990s the arrival of significant numbers of Somali refugees made blacks more visible in Minnesota without closing the wealth gap, and led to an increase in anti-immigrant sentiment among some Minnesotans.

But even the most progressive inhabitants of the state, while open to African American culture, are often unaware of this history. This is part of what some experts have called the “Minnesota paradox”, neatly summed up in the words of former professional American basketball player Jalen Rose: “I wish America loved black people as much as they love black culture.”

After decades of affirmative action and integration policies, some white Americans have come to feel that they are victims of “reverse racism”. Literary theorist Kenneth Burke has used the term “victimage” to explain how guilt can lead to those with racist beliefs to transform their victims into victimizers.

This “reverse narrative” is a common feature of racist discourse.

In 2015, Sean Hannity of Fox News, a close ally of Donald Trump, accused the “Black Lives Matter” movement of being “racist”, and drew parallels with the Ku Klux Klan. Another example took place two years later, when Donald Trump accused Colin Kaepernick, then quarterback of the San Francisco 49ers, of being unpatriotic for kneeling during the national anthem. Trump called on the team’s to “get that son of a bitch off the field immediately. Get him out. He’s fired. He’s fired”. Rather than understanding that African Americans were frequently victims of police violence, some whites saw themselves as the victims – that their Sunday football experience had been unfairly interrupted.

The narrative continued last week on Fox News, when Tucker Carlson, a close ally of Donald Trump, expressed doubts about the cause of George Floyd’s death, and called signs in Saint Paul reading “black-owned business” racist.

Also present on the program was Eddie S. Glaude Jr., a black Princeton professor. When he sought to explain the violence and its underlying causes, Tucker asserted that he was defending violent behavior, as if it were impossible to both condemn violence and try to understand its motivation. Martin Luther King himself, an icon of non-violence protest, did so eloquently during the riots of the late 1960s: “Our nation’s summers of rioting are caused by our nation’s late winters.”

The “reverse narrative” involves conservatives presenting themselves as the victims of what they assert is an unjust media-judicial system, often using the language of black minorities. Laura Ingraham, also on Fox News, made this clear at the end of a recent show. Rather than directly condemning police violence against African Americans, she highlighted the FBI investigation into alleged links of Donald Trump and his advisors to Russian authorities. “President Trump knows how poisonous and out-of-control law enforcement can be”, Ingraham stated. Yet the president’s own words suggest where the problem of injustice really lies, and who its victims are.

The accusations of racism against Donald Trump are anything but new. A particularly telling case took place in 1989, when a woman was raped and beaten in New York City’s Central Park. Five black men, all minors at the time, were arrested and accused of the crime and became known as the “Central Park Five”. Shortly after their arrest, Donald Trump spent the equivalent of $175,000 (156,000 euros) to place full-page ads in four newspapers calling for their execution:

The five were convicted of a range of charges and served extensive jail time, but in 2002 were fully exonerated thanks to DNA evidence and the confession from the real perpetrator. Despite his mistaken rush to judgment, Trump has continued to suggest that they should be guilty of something – he did so in 2013, in 2014, and as recently as 2018.

For some figures in the American right, the violence is simply the fault of “weak Democrats” who, as Rudy Guiliani said, are “idiots, Democrats who let criminals out of jails, who set bail for murderers [and are] friendly to criminals.” Of course, many urban mayors are Democrats and some are minorities as well, including the mayor of Saint Paul, Melvin Carter. Along with the Minneapolis mayor and Minnesota governor, Carter accused outside elements of instigating much of the violence in the Twin Cities, a claim that was later revealed to have been based on inaccurate data. Donald Trump has also accused “antifa” movement, far-left activists, and the mainstream media of fomenting hatred and anarchy.

In short, the killing of George Floyd and the demonstrations and violence that have followed have become a sort of Rorschach test. Confirmation bias can lead us to see the enemies we expect, reducing a complex situation to a simple story that fits preconceived notions.

The Executive Branch in the balance

Given that the United States is moving toward a president election, it is difficult at this stage to see who might benefit electorally. The demonstrations and violence that took place in 1968 in response to the assassination of Martin Luther King Jr. in April and then the Democratic National Convention in August pushed a significant number of voters toward “law and order” Republicans. Lyndon B. Johnson, who as president had championed a wide range of civil-rights legislation during his first term, chose to end his bid for second term, and Nixon was elected.

Trump is already office, however, and despite controlling the Senate and, to a certain extent, the Supreme Court, he has adopted a “challenger” playbook and continued to assert that he is treated “unfairly” by the media – in essence, that he is being victimized. Given the deep divide in the United States, it will not come as surprising that the majority of Republicans support Trump’s assertion, while the majority of Democrats do not.