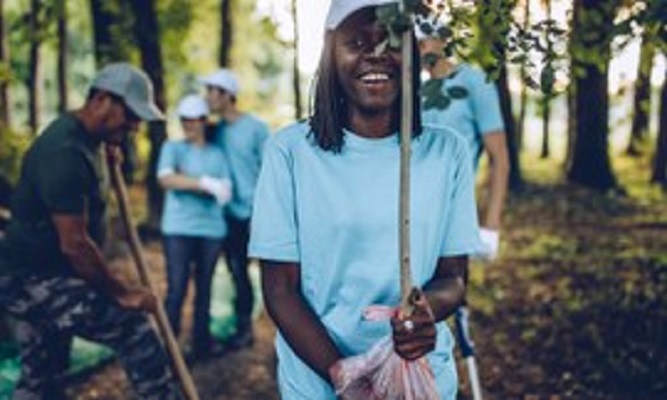 Seeing Color in Green Spaces: How to Increase Diversity in Conservation

Angelou Ezelio has worked on public land and environmental projects for decades, and started the Greening Youth Foundation to engage youth in the outdoors and careers in conservation. In her new book Engage, Connect, Protect: Empowering Diverse Youth as Environmental Leaders, she describes how changing racial exclusion is harder when White people in organizations and companies are resistant to seeing the problem.

Over the last couple of decades working in the environmental space, I’ve discovered that for many Black people, especially older generations, the outdoors conjures a lot of historical negativity that they’d rather forget. Carolyn Finney persuasively investigated this phenomenon in her 2014 book, Black Faces, White Spaces: Reimagining the Relationship of African Americans to the Great Outdoors. Finney claims that the legacies of slavery, Jim Crow, and racial violence have shaped our cultural understanding of the outdoors and our view of who should and can have access to natural spaces.

We see this every year with each new group of interns, hear it in the voices of their parents when they’re asking us questions about their children’s safety in these far-flung parks surrounded by White people. We have their babies, and we’re sending them to places they’ve never been before themselves. In some of these parks, there’s virtually no cellphone coverage, so they can’t get hourly check-ins once their child is gone. We find ourselves doing a lot of counseling and consoling with the parents. In effect, we’re rewriting that family’s entire idea of the outdoors as a dangerous space, shifting the paradigm completely by saying it’s OK to be in those places. As of 2018, we had sent more than 5,000 interns into national parks and forests across the country, and wonderfully, easily 85 percent of them reported having positive experiences. Many of them now even bring their families back and have picnics with their parents and their aunties and their grandparents. They send us pictures all the time. Their decision to become interns through the foundation has a mushrooming effect on everyone in their lives, rippling outward and touching Black folks across the land.

After the internship is over, many parents are not entirely comfortable with their child announcing that they want to pursue an environmental career, thinking: Is that good and stable enough? Can you make enough money doing that? We need to send out the word that careers in natural resource management can be added to the list of good stable jobs.

Of late, we have set our sights on another lily-white corner of the environmental world: the outdoor retailer industry. These companies have long been connected to federal land management agencies because they provide gear that outdoor enthusiasts and workers need when toiling outside in all kinds of conditions. If you look around at the workforce of these companies, you see the same homogeneity that plagued the federal agencies. Their demographics were a perfect mirror of each other, except one was private and one was public.

The retailers are driven by an added incentive that doesn’t enter into the federal agency picture: the profit motive. They are eager to sell their wares to large and growing demographics that they hadn’t yet connected with, namely communities of color. But it seems they hadn’t realized that if they wanted to sell to these communities, perhaps it might be helpful to employ some of their members. At least that’s me giving them the benefit of the doubt. It seems they hadn’t yet made this connection, though it’s always possible that they just weren’t interested in hiring members of these communities. I have to admit I am still stunned by how overwhelmingly White these companies are at this rather late date, closing in on 2020. We have been in discussions with their representatives about creating internships to include young people of color. Progress has been slow but steady. Some companies that are new to the scene, like Wylder Goods, inherently get it. Other more established ones, like The North Face, are starting to understand the economic and social benefits of diversity and inclusivity.

It’s fascinating, because if you polled the executives from this industry, a vast majority of them would probably consider themselves to be politically liberal and aware. To use a popular term, they might consider themselves woke. But somehow they forgot to apply that liberalism to their workforce.

I had an extremely unsettling experience when I attended a retreat for the Trust for Public Land out in Sonoma County, California. One early morning, a colleague and I decided to take a walk. In an attempt to get some exercise, we were briskly walking down the street from our hotel, enjoying the lovely surroundings, deep in conversation about our personal lives and our families. Out of nowhere, a white woman drove by in a Ford Element SUV (orange; I will never forget that color) and shouted, “Go home!” I was stunned. Napa Valley’s beauty instantly turned ugly and sinister. When I got back to the retreat and reported what had happened, my co-workers were somewhat surprised. But I needed to get out of there. I called my husband immediately because the plan was for him to meet me in Napa Valley for a mini-vacation.

However, I wanted no part of the place, so I packed my bags and within a couple of hours was headed to the airport to fly back to Atlanta. I later told my colleagues that they need to think very hard about the kinds of places we go for our retreats in the future—and of course this area in Sonoma County should be snatched off the list immediately. Their response? Blah, blah, blah. A lot of lip service. But the point is that they now needed to start considering such issues so that someone like me could be as comfortable as they were.

I know this part of the story gets really complicated. See, the trust has a great mission of conserving land for the public. In fact, I am appreciative of the trust, because I found them after working for the government, which I knew was not the answer for me. The national NGO really gave me my wings and perspective, and I will always be thankful. However, working for them and other environmental NGOs also emphasized the incredible polarity that exists in the conservation world. Particularly, I got a certain understanding of the White liberal world. Whenever things would get racially uncomfortable at the workplace, it would often be written off as an exaggerated aberration: “Surely you misunderstood his/her intention…” or “Let’s not lose sight of the issue at hand.”

I wanted to make sure that no young brown person in the future with an interest in an environmental field had to exist in this disconnected workplace.

It was very frustrating navigating the workplace environment because I knew race was always something people did not want to discuss. But, how could we ever move beyond the discomfort if no one was willing to talk about it? My most hated phrase was “Angelou, I don’t even see color—we all look the same.” Really? In short, I knew I needed to leave this work world so that I could actually breathe. Most importantly, I wanted to make sure that no young Brown person in the future with an interest in an environmental field had to exist in this disconnected workplace.

But I know I can’t present an angry face to the world. I’ve spent too many years of my adult life observing the peril that angry Black women encounter in professional spaces. Often we encounter the same peril whether we’re angry or not. I can be literally melting inside from the angry heat I’m feeling, but I know I must keep it hidden. They don’t want to see Angry Angelou. She won’t help anybody. I know I have to present Smiling Angelou. She makes big moves. I can’t say to them, “You know what? It’s 2017 and everyone in this room is White! You don’t see a problem with that?” Even if I’m thinking that, it has to come out like this: “I understand that you looked up and realized you weren’t being as intentional about diversity as you needed to be and about having other perspectives around the table. OK, so let me help you be more representative of the world we all live in.”

It reminds me of scenes from the television show Black-ish with Anthony Anderson and Tracee Ellis Ross. They do a great job of depicting the comfort that White characters have around each other at the advertising agency where Anthony’s character works—and the unease they have talking about anything related to race. It might be comedy, but for many African-Americans who work around White people, unfortunately those scenes are all too real. That’s what drives many of us out of corporate America and turns us into entrepreneurs—exhaustion, frustration, resignation.

I was proud when a group of Greening Youth Foundation interns learned very early that they didn’t necessarily need corporate America. We had trained these young adults in our Urban Youth Corps to work in urban agriculture and landscape management, but when they finished the program, they couldn’t get jobs. Although this demographic was receiving incredible training and certifications in various areas, not many sectors had actual jobs waiting for them. So, in many cases, these young adults didn’t stop there; they created their own businesses. They said, “We have the skill set now, so why are we waiting to get hired?” There are reams of data showing that entrepreneurship among African-American women is flying off the charts. This feeling of us not being included or accepted is giving birth to wonderful new businesses.

This excerpt is from Engage, Connect, Protect: Empowering Diverse Youth as Environmental Leaders by Angelou Ezeilo with Nick Chiles, forthcoming from New Society Publishers, November 2019. It appears by permission of the author and publisher.