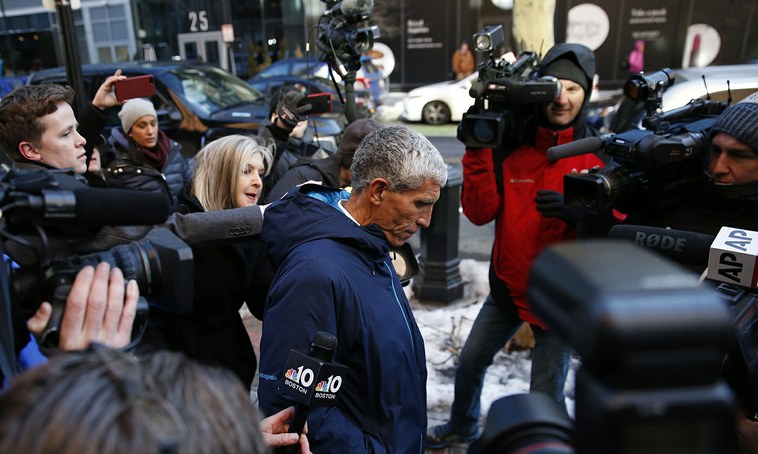 So This Is How White Privilege Goes to College

There are those who like to think the United States is a meritocracy, a place where all you need to do to get ahead is to be able and to work hard. Talent plus effort equals success.

It’s bunk, of course, as anyone who grows up and looks around would tell you.

Wealth and White privilege play an outsize role in determining who comes out on top. And if “on top” means more money, more opportunity, and more power, that trend has only become more pronounced in recent years. The rich continue to grow richer at the expense of everyone else.

Which brings us to the unsurprising college admissions scandal this week, in which 50 wealthy White people were arrested for bribing university officials and testing proctors to get otherwise unqualified students into elite schools. The only real surprise, perhaps, is that they were arrested for it.

But despite the fact that this looks like a simple case of another bunch of wealthy White people getting caught breaking the rules, this is really the exception rather than the rule.

The super rich and privileged, in addition to having enough money to pay tuition bills, have long relied on “legacy admissions” to get them into their elite college of choice. It works like this: Apply to the elite school Dad went to, and you’ll be welcomed with the admission bar lowered, especially if Dad helped the application process along with a timely donation to the university’s endowment fund.

Students of color, meanwhile, often grow up internalizing the mantra that they have to work twice as hard to be taken as seriously as White students. And even if they overcome that, it’s just one obstacle among many that they will face.

Kamilah Campbell, a Black high school senior in Florida, is currently fighting the Educational Testing Service because the company invalidated her SAT score after she improved it by 300 points after retaking the test—from 900 to 1200. (One of the children of the privileged White people in the bribery scandal had an SAT score go up 400 points, and ETS didn’t seem to think there was anything wrong with that.) Ohio mother Kelley Williams-Bolar was sentenced to jail for lying about her address so her kids could attend a better school.

Taylor Crumpton, a writer who lives in the San Francisco Bay Area, was one of those students driven to succeed.

She’s a Black woman who grew up with her single mother in the Dallas area, was occasionally homeless, and attended college at nearby Abilene Christian University, studying social work. What she really wanted was to study in the Ivy League, in particular at the University of Pennsylvania, where the School of Social Policy and Practice’s SexGen Policy Lab was the nation’s first research institute devoted to LGBTQ policy making. To get there, she says she studied hard, joined numerous groups and participated in projects, presented at academic conferences, and won awards.

It worked. She gained admission not only to the university graduate program and the SexGen lab but also to the program’s accelerated 10-month program usually reserved for mid-career professionals.

But she was still an outsider.

“A common thing among the students of color in my cohort was imposter syndrome,” Crumpton says. “There was always this feeling that I always had to be the best because there was a chance this spot would be taken from me.”

She felt this even among fellow students of color, some of whom had come from Ivy League undergraduate programs or Historically Black Colleges and Universities.

She recognizes now that she was playing a part in an exploitative system, trying to fit into a capitalist model created by the same system of colonization that enslaved her ancestors.

“In order to be deemed as credible you have to be almost a superhuman,” Crumpton says.

She said her health was severely impacted by the stress of her experience and postgraduate unemployment, despite the promise that an Ivy League degree would alleviate those worries. She outlined her frustrations with her experience shortly after graduation in an essay she published on Medium. “Secured employment and advanced socioeconomic mobility associated with the Ivies is as real as the American Dream, which has proven to be untrue, unless you inhabit the body of a cisgender white man,” she wrote.

“I pushed myself to be the smartest person in the room, but at the same time, the least threatening. Because who wants to be labeled as the angry Black girl?”

The system that dangles the promise of entry into the upper echelons is the same one that gave us legacy admissions, designed to reinforce privilege.

It’s notable that many colleges and universities today, including the Ivy Leagues, have worked to increase  diversity and accessibility. Princeton University states that its financial aid packages ensure all accepted students can afford their education.

It’s one thing to admit more people of color and quite another to help them succeed in an environment that is still dominated by wealthy White kids.

As recently as 2018, 42 percent of private universities and 6 percent of public ones had legacy admission policies, according to survey of admissions officials by Inside Higher Ed. In 2018, Harvard University was sued by a group of Asian students for discrimination in admissions, a lawsuit that is ongoing. But it has revealed much about the school’s practices: Children of alumni are admitted at a rate of 33 percent, compared with 5 percent for nonlegacy students. Two-thirds of the student body comes from the wealthiest 20 percent of the population, while only 4.5 percent of the student body comes from the poorest 20 percent.

Tests like the SAT are supposed to be meritocratic, but research has shown that they are skewed by class and race, including family income, but this has spawned the very capitalistic system of college prep courses, private tutoring, “admissions consulting,” and test preparation. That industry is estimated to be worth $1.2 billion in 2019, according to consulting firm IBISWorld.

Com-modifying higher education in this manner tends to benefit only those who sell those services and those who can afford to buy them.

For wealthy parents of otherwise unremarkable students, there is “The Key,” the Edge College and Career Network whose founder, William Singer, was the ringleader of this week’s $25 million bribery bust. He’s already pleaded guilty in court and had been cooperating with investigators since late 2018, according to The New York Times.

In some ways this is the logical result of an education system both biased toward wealth and privilege and corrupted by it. Even so, when Black students face criticism that they are only in college because of a racial preference, every White student on campus is assumed to have earned their place.

Hyper competitive admissions often means that students—especially those from underrepresented communities—are driven to meet absurdly high expectations and with a questionable payoff.

Taylor Crumpton eventually found work in her field, but only after moving across the country to California and moving in with her father for a year. In retrospect, she wishes that she would have had the luxury of taking a gap year, a year off before or during college when students travel, do volunteer work, or otherwise gain life experience—something that by itself implies a certain amount of privilege and insulation from the necessity of needing to hurry up, finish school, and get into the workforce. But that “break,” may be more of a psychological one: Students of color need a break from a life of constant evaluation and judgment, she says.

“They should have the freedom to breathe and be human,” Crumpton says.