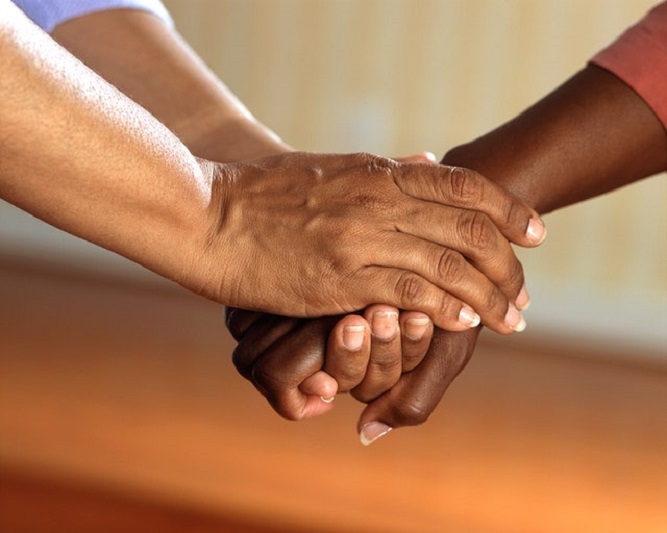 The Crackdown On Oakland’s Moms 4 Housing

Just after 5 a.m. on Jan. 14, about 30 deputies from the Alameda County Sheriff’s Office arrived at 2928 Magnolia St. in West Oakland. They came armed with rifles and a tank-like armored vehicle. Some deputies were dressed in camouflage fatigues. Their objective: Evict four mothers and their children from the three-bedroom house.

“I’ve never seen anything like that. To come into the house not knowing if our children were there. Fortunately, the kids were not. But … they caused a lot of harm and trauma,” says Dominique Walker, one mother who occupied the Magnolia Street home.

The house had sat vacant for several years. Walker and a woman named Sameerah Karim and their children moved into the house in November 2019. The two longtime Oaklanders were homeless and thought it made more sense for them and their families to live there than to leave it empty.

They call themselves Moms 4 Housing. During their occupation, they cleaned up the home. Community members donated furniture. They were later joined in the home by two more Black homeless mothers named Tolani King and Misty Cross.

The occupation was always about more than just putting a roof over their heads. It was also a campaign to call attention to the role housing speculation was playing in Oakland’s gentrification, displacement, and homelessness crisis. The house on Magnolia Street had been bought for $501,000 in August by Wedgewood Properties, one of Oakland’s most prolific home flippers. The San Francisco Chronicle reported that Wedgewood had rehabbed and sold about 160 homes there in the past nine years.

“Folks are starting to realize that housing should be recognized as a human right.” — Dominique Walker

Wedgewood did not agree with the Moms’ argument and began working to evict the group in November. On Jan. 10, an Oakland judge sided with Wedgewood and ordered the women to leave. The Moms refused, which lead to the Jan. 14 eviction. That morning, the sheriff’s department arrested King, Cross, and two of the more than 100 supporters who’d gathered at the house.

If that had been the end of it, Walker would’ve considered their fight a success, because the occupation garnered significant local and national media attention and drew support from community members and several elected officials, including members of the Oakland City Council.

“It just shows the power of organizing and people coming together,” Walker says. “Folks are starting to realize that housing should be recognized as a human right. … Just the negotiation of this process is a win for us, a win for the people, a win for the community. It’s much bigger than our individual situations.”

But the eviction is not the end of the Moms’ story. In a surprise twist, they could end up living in the Magnolia Street home legally. At the behest of Oakland Mayor Libby Schaaf, Wedgewood is negotiating the sale of the house to a nonprofit called Oakland Community Land Trust for no more than its appraised value. (Real estate company Zillow estimates the three-bedroom house to be worth about $630,000).

Under the agreement, Oakland CLT would take the house off the open market to ensure it is sold or rented at below-market rates to low-income residents in perpetuity. Land trusts keep housing affordable by separating the cost of the home from the cost of the land. The nonprofit trust retains ownership of the land through a long-term ground lease, but sells the home to income-qualified buyers for significantly less than market rate. CLTs also rent out homes in their portfolios. In Oakland CLT’s case, buyers must earn 50% to 80% of the median income in the area to qualify as a buyer or tenant.

In exchange for the lower-than-market sale price, CLT buyers who later move out agree to also sell the home at a below-market rate to income-qualified buyers. The owners are able to build some wealth off their home’s equity, but less than they likely would if they’d been able to buy a market-price home. Even with less equity, CLT supporters say, the model still gives lower-income residents access to stable housing and wealth generation they likely wouldn’t have otherwise in a high-cost market such as the Bay Area.

Despite their value for the low-income homeowners who can buy into them, CLTs remain a limited tool. Oakland CLT, for example, has about 40 properties in its portfolio, most of which are single family homes, with a few multifamily buildings in the mix. Grounded Solutions Network estimates that about 12,000 CLT homes are across the U.S. Compared to the more than 138,537,000 total housing units in the United States, that’s a drop in the bucket.

Still, there’s evidence CLTs can help stabilize rapidly changing communities. In a white paper published by Grounded Solutions, the authors cite a study that found CLTs can ease the effects that boom times have on a city. The authors write, “Across 124 CLT neighborhoods in 15 states, community land trusts moderated the adverse effects of gentrification between 2000 and 2010 by increasing affordability, stabilizing housing prices, and reducing displacement, compared with similar non-CLT neighborhoods.”

That is at the heart of Oakland CLT’s mission. The organization launched in 2009 amid the foreclosure crisis to try to get homes back from banks and into community ownership.

A decade on, the problem has changed. Instead of people losing homes to the foreclosure crisis, Oakland is suffering from a massive influx of people and a shortage of housing, especially housing affordable to people earning less than median income—which is now more than $78,000 for individuals.

Adding to the problem is a new breed of highly capitalized corporate home buyers, many of which emerged from the foreclosure crisis, who either flip properties or rent them out until the property values are high enough to incentivize a sale.

“This increasing speculation around housing stock in the city continues to have disparate impacts on low income folks, Black families in Oakland,” King said. “I think the Moms shine a very clear light on the continued impacts that housing speculation is having.”

In the Bay Area, as in most American communities, significant racial disparities exist between who’s buying homes and who’s living on the street. In Alameda County, 47% of people without stable housing are Black, despite Black people accounting for just 11% of the total population. According to the U.S. Census Bureau, the 2016 annual median income for Black households in the Bay Area was $46,571, compared with $106,919 for White households.

Oakland CLT’s negotiations with Wedgewood are just getting underway and have no set timeline for their completion, but King says the plan is to move the Moms back into the home, either as renters or owners.

No matter the outcome of those negotiations, the Moms’ campaign is sure to reverberate beyond Magnolia Street. After the conversation with Mayor Schaaf, Wedgewood agreed to offer right of first refusal to Oakland CLT for its 50 or so Oakland properties and encourage other real estate companies in the city to do the same. In a news release, Schaaf also announced plans to create a right of first refusal policy for tenants to allow them to buy property from their landlords before the home goes on the open market, and plans to create a public registry of foreclosed and vacant properties in the city.

Perhaps as significant as those policy changes, the Moms’ campaign elevated the shifting conversation about housing preservation and commodified real estate markets to national headlines.

“In some respects, it’s a rebirth of the land trust movement,” said Peter Cohen, executive director of the Council of Community Housing Organizations, a Bay Area coalition of housing providers and advocacy groups. “Land trusts have been around for a long time, but there is a certain public perception of them as hippy communes. The relationship between Moms 4 Housing and Oakland CLT really changes the perception. These are African American women in central Oakland.”

In the eyes of East Bay Housing Organization executive director Gloria Bruce, “Social housing is having a moment.” She defines social housing as any housing removed from the private market, including land trusts, cooperatives, public housing and income-restricted nonprofit rentals.

“We really saw Moms 4 Housing strike a nerve because people are seeing that the market serves a very small number of very wealthy people and everybody else is getting left behind,” she said.

Like the Moms, Bruce’s organization wants to establish housing as a human right. To get there, she said, communities need to get housing off the speculative market. She and Cohen see land trusts and housing cooperatives with shared profit models as one type tool to accomplish that goal.

Still, given the stated goal of building 14,000 new units and preserving 26,000 units of affordable housing each year throughout the region, Bruce argues that preservation must be a complement to the construction of new, income-restricted affordable housing, not a substitute for it.

The Moms are in limbo while they await Oakland CLT’s negotiations to play out. But Walker says they are all safe and working to figure out longer-term living situations.

In the meantime, their new objective is to “hold the Alameda County sheriff accountable for the militarized eviction,” Walker said. They’re also planning to meet with Mayor Schaaf and California Gov. Gavin Newsome to discuss ways to solve Oakland’s homelessness crisis.

Whether they end up living in the Magnolia Street house or not, the Moms plan to continue their fight. “Myself and all of the Moms are committed to this movement and this struggle,” says Walker. “In whatever space we’re allowed to speak, we will uplift housing as a human right. We’re going to keep fighting until all unhoused folks have shelter. We want to reclaim houses from speculators back into the community.”