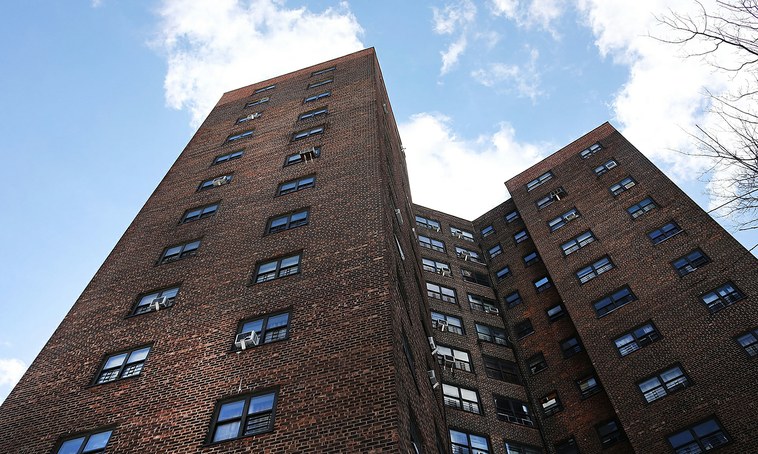 The Government Shutdown Put Thousands at Risk for Eviction

The 35-day government shutdown wreaked havoc on millions of Americans lives and livelihoods as fewer food inspections took place, parks went uncleaned, museums shut their doors, airport lines grew longer, and whole agencies ground to a halt. The experience was especially distressing for those who depend on the federal government for their basic needs, including food and shelter.

Thousands of furloughed employees—many living paycheck to paycheck—found themselves in line for free meals at pop-up kitchens and food pantries.

Recipients of SNAP assistance worried whether their monthly benefits would end.

And contractors with the Department of Housing and Urban Development and their tenants agonized over what a shutdown meant for them.

“We work really, really hard to have good relationships with local landlords. And if there’s the slightest hint that they won’t get their subsidy payments as promised, it erodes trust,” said Kurt Wiest, executive director of the Bremerton Housing Authority in Washington state. “And this program operates on trust.”

Now that the shutdown is over—at least for now—HUD spokespeople are claiming that the stoppage had no impact on tenants in federal housing programs. Technically, that’s true; in the end, no one receiving a housing subsidy lost their home.

But as Wiest’s comment illustrates, the government’s halt brought a deep sense of apprehension to groups across the housing sector, causing collateral damage to relationships founded on the belief that the government pays its bills and issues its contracts on time.

That breach of trust could take years to rectify.

But with the possibility of another shutdown in mid-February looming, residents, employees, and service providers all said they’re on pins and needles as they try to move fully forward with business as usual, unsure of what will happen come Feb. 15, when the government’s continuing resolution expires.

HUD directors appeared to have been caught flat-footed by the shutdown. Federal contracts for Section 8 Project-Based Rental Assistance properties, for example, began expiring soon after government programs formally were suspended. Those privately owned housing developments typically require residents to pay 30 percent of their incomes in rent, and the rest is covered by HUD. By the end of December, 650 HUD contracts with property owners failed to be renewed, affecting approximately 21,500 units—two-thirds of which are housing for the elderly or people with disabilities. Another 1,500 contracts expired last month.

What that means is that property owners weren’t getting paid a full month’s rent for their units from HUD. In response, some owners began demanding their low-income residents come up with the full rent—or else. Almost 40,000 households were at risk of eviction.

Luckily, said Susan Popkin, a housing analyst at the Urban Institute, news of the demands made the media and the landlords backed down. “As far as I know, there were no actual evictions,” she said. Still, “it was a real threat to very vulnerable people: seniors and people with disabilities. A lot of people were very scared and stressed,” she added.

Public housing authorities, which are responsible for 1.1 million low-income households, had enough operating reserves to last through the end of February. But as the shutdown lingered, many housing authority directors started to worry about running out of money.

Some began to cut extraneous initiatives, such as programs to help public housing residents get on their feet. Others, like Mark Gillett, director of the Oklahoma City Housing Authority, reduced staff to part-time hours in order to save precious funds.

“Housing authorities don’t have a lot of reserves, so we can’t run at full operation for very long” without funding, Gillett said.

And because public housing authorities’ capital funds hadn’t been allocated before the shutdown began, directors were unable to make crucial repairs to complexes or fix up units when residents moved out.

Agreements to build more affordable housing using low-income housing tax credits were also affected by the shutdown. “Developers couldn’t actually close their deals because no one was at HUD to continue processing their transactions,” said Adrianne Todman, executive director of the National Association of Housing and Redevelopment Officials. In some cases, the complicated agreements were simply delayed. In others, said Todman, “some had a specific time frame and reached the point of no return and lost their LIHTC status.”

But HUD’s Section 8 Housing Choice Voucher program arguably took the biggest hit. Like public housing, the voucher program was funded through Feb. 28. However, just in case, many housing authorities, which administer the program, closed their waiting lists and refused to issue new vouchers until the government reopened.

As the shutdown continued, housing authority directors began to fret.

Soon, they’d be unable to cover the vouchers, and worried that tenants might lose their homes. “There is a provision in the law saying if a housing assistance payment isn’t paid, it shouldn’t be grounds for eviction,” Gillett said. “But it’s never been tested.”

The greatest concern, though, was a big-picture one. Housing authorities are always looking to expand the number of landlords who accept housing choice vouchers; it’s not mandatory, and there are never enough homes for all the voucher holders out there. For a landlord, being tied to the government requires a fair amount of red tape, and the only real upside is the rent check that reliably appears at the first of the month.

What would happen to the program’s reputation if that check failed to arrive?

“Just the prospect of payments not being made will have a very disruptive impact—will the federal government contract be honored?” asked Sunia Zaterman, executive director of the Council of Large Public Housing Authorities. That’s particularly a concern in tight rental markets, where the demand for apartments is intense; some rental property owners may decide to abandon the voucher program for the private market.

And with the threat of another shutdown hovering, those qualms are magnified—for landlords, but also for housing authority directors and residents. Across the board, there is considerable worry and tension about what will happen next.

On Feb. 1, HUD sent out a letter to all housing authorities informing them that its housing programs would be funded for March and April. That is, Section 8 Project Based properties, public housing complexes, and Section 8 Housing Choice Vouchers would be fully covered until the end of April.

“But what about May?” Wiest asked. “The uncertainty that we were dealing with regarding the last shutdown—we would like to have some assurance that things will continue as they’ve been operating for the last 40 years.” After all, no one thought the last shutdown would last as long as it did. If there’s another one, there’s no telling how long it could last.

If it does, the real losers will be residents who use housing subsidies. And they’re already shaken.

“Individuals like me who live in public housing or Section 8, it’s hard to know how our housing is being affected by the shutdown, because [government officials] won’t talk about it,” said Victoria Hilt, a public housing resident in Bremerton. “Will we get kicked out of our homes? Nobody talks about it “[so] we live in uncertainty.”

That doubt is magnified for those residents on fixed incomes who receive other government benefits, she said. For example, many will cut down on paying bills in order to ensure that they have enough cash to buy food if their food stamps are canceled.

Hilt, who has a 7-year-old daughter, says she’s frustrated with the paralysis in government.

“What the common individual wants is a solution, even if it’s not picture-perfect,” she says. “I’d much rather have a solution than uncertainty … Everyone wouldn’t be happy, but there’d be one.”