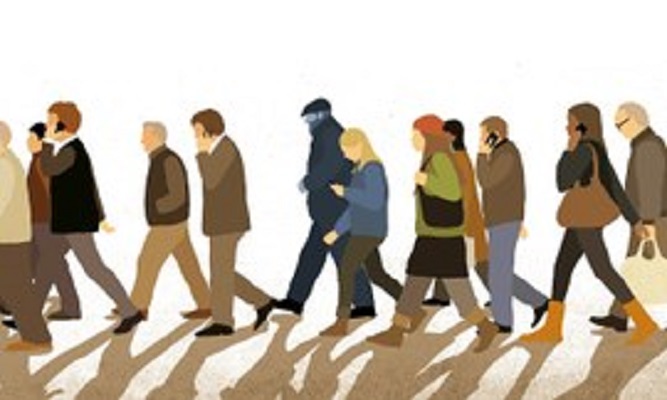 The Kids Are All Right, But the Adults Are Struggling

The rise of suicide and other self-destructive behavior in the U.S. raises questions both tragic and curious. Suicide rates are up for every age group over the past few years, and they tend to get attention when someone—usually a young person—takes their own life. What’s causing this upswing?

The truth is complicated. But the short version is this: It’s not youth who are creating the crisis. It’s their parents’ generation.

Americans have the worst levels of addiction, suicide, and self-destruction in the Western world. According to the Centers for Disease Control and Prevention, a record 120,000 Americans died from suicides and related self-destructive causes in 2017. Preliminary figures indicate self-destructive death tolls continued to rise in 2018.

Why do Americans find suicide so hard to discuss honestly, let alone ameliorate? Consider the demographics of suicide. Men are three times more at risk for deadly self-destruction than women. Middle-agers three times more so than teenagers. White people more than twice as much as people of color. Rural and small-town residents nearly twice as much as residents of large cities.

Male, White, middle American, middle-aged… self-destruction most afflicts powerful and mainstream groups. Yet, it is also stigmatized as a sign of mental illness, weakness, irrationality, and the need for “help.” That a stigmatized behavior most afflicts a dominant population explains why authorities and media commentators remain reluctant to face suicide’s realities.

Instead, most invoke the old American tradition of blaming social and health problems on immigrants, minorities, gays, and youth—or whatever powerless outgroup is easiest to target at the time. They invoke popular-psychology notions that have become strikingly disconnected from real behaviors.

A similar trend plays out in reports of suicide. In addition to mischaracterizing suicide as a singular problem of youth (which it isn’t; adult age groups have much higher rates), media-quotable authorities advance superficial explanations that youth suicides are caused by youths’ own social media and troubled mindsets.

In fact, according to data from the Centers for Disease Control and Prevention, a 16-year-old is three times more likely to have a 45-year-old parent die from suicide or self-destruction than the other way around. Losing a parent or close adult relative sharply increases children’s and teens’ odds of depression and suicidal ideation. Yet, we don’t talk about that.

If leaders and interest groups were serious about investigating America’s epidemic of suicide and self-destructive behaviors, they would find fascinating, important developments with lessons from our past and implications for the future.

It isn’t teenagers or senior citizens driving the worst trends and suffering the highest rates.

Contrary to media reports, experts, and interest-group campaigns, it isn’t teenagers or senior citizens driving the worst trends and suffering the highest rates. Among teenagers and the elderly, suicidal deaths have remained stable, according to the CDC, falling from the 1970s to the mid-2000s, then rising somewhat over the last decade.

The trends are remarkable. Before 2000, seniors 65 and older suffered the worst suicide levels of any age; today, they have the second lowest rate and make up only 10 percent of suicidal deaths. Teens age 15-19 had the worst level of self-destructive deaths before 1980 but now have the lowest rate, as well as the lowest rate of deaths certified by medical examiners as suicide. Today, persons under age 20 account for just 3 percent of all suicidal deaths.

The most worrisome self-destruction trends by far afflict those people in between. For ages 25 to 64, suicidal deaths in all categories have escalated dramatically to record high levels over the last quarter century. Those age 20 to 24 show smaller but still disturbing increases.

Instead, unexpectedly, teen trends have closely tracked trends among their grandparents. (The mathematical correlation between teenage and age 65+ suicidal death rates is +0.87 on a scale of -1.00 to +1.00, or nearly perfect.) The odds that this is a coincidence are less than 1 in 1,000; such tight correlations are practically unheard-of in social science.

Do today’s grandparents and grandchildren—generations a half-century apart that differ sharply in demographics and experiences—harbor surprising commonalities?

In some families, the connection is direct. A record 2.7 million grandparents directly care for their grandchildren, and vice versa. These grandparent-grandchild ties where addiction, mental health, and imprisonment afflict parents may be helping families most at risk.

America’s breakdown is not occurring at its edges, but in its middle.

American seniors’ and teenagers’ low rates of self-destruction may relate to their generational times and circumstances. They sandwich baby boomer and Gen-X Americans, who have proven extraordinarily high-risk for pathologies, from crime and addiction to suicide and reactionary politics.

Baby boomers’ and Gen-Xers’ troubles remain largely unstudied. Three possible 1960s and 1970s factors in their greater self-destruction include rapidly increased family breakup; the explosion in deadly, addictive barbiturate drugs; and the Vietnam War. These generations’ chaotic upbringings and difficulty adapting to unprecedented racial and technological changes have weakened their sense of community, fostered rising authoritarianism, and pushed American society to the brink of disintegration.

In contrast, the generational currents influencing senior citizens and younger millennials were different. Seniors, who reached adolescence in the 1950s, were raised in more segregated societies, have formed communities largely isolated from racial change, and have benefitted from social insurance and medical investments. Only recently, as more troubled boomers aged into senior years, have crime, addiction, and suicide started rising among the elderly.

Similarly, teenagers’ troubles fell in the 30 years from 1975 to 2005 as boomers and Xers aged out adolescence and were replaced by Millennials. Millennials are the most urban, racially integrated, technologically comfortable generation ever, one accustomed to change.

However, teenagers cannot be expected to survive severely troubled parents indefinitely. As suicidal behaviors among their parents rose in the 1980s and 1990s and soared in the 2000s, teen suicidality began rising from record lows after 2007.

What America’s suicide trends may be telling us, then, is that older, racially and religiously homogenous cultures with strong group identity that still allowed some individual freedom, such as America of the 1950s and senior citizen communities today, are less likely to breed self-destruction.

Modern teenagers’ situation is different. They cannot recreate their grandparents’ tribal past and isolated enclaves, nor would we want them to. Rather, the young appear to be forging new cultures involving greater diversity, urban living, and online interconnections with their own identities and regulations.

Instead of incessant panics depicting youth as harbingers of mental and social breakdown, we need to study what forces are keeping teenage suicidal death rates low (just 19 deaths per 100,000 population age 15 to 19 in 2017), somewhat below those of their grandparents (24) and well below that of their parents’ generation (55).

The ideal may be to explore combining the interdependent benefits of traditional, homogenous cultures with the global connections of modern multicultures. America’s breakdown is not occurring at its edges, but in its middle. That is why it appears so worrisome—and why the solutions before our eyes are so hard to see.