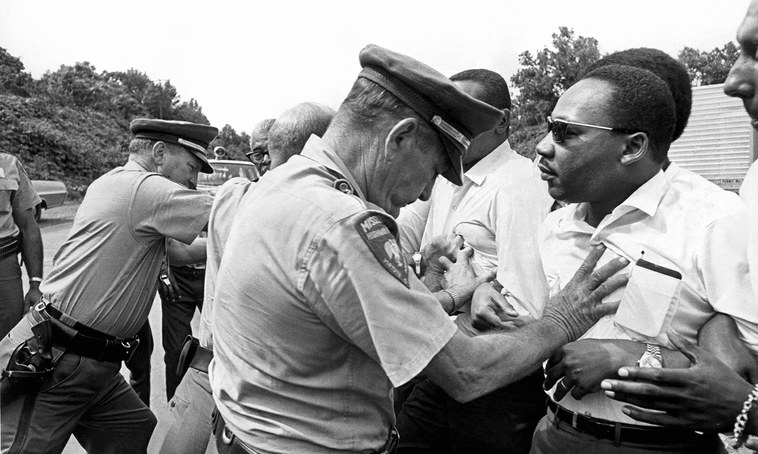 Dr. King was widely disliked for his message of liberation for oppressed people in this country—Black people, Brown people, Native people, all poor people.

At the time of his death, Dr. Martin Luther King Jr. was one of the most reviled men in the United States. Today, we remember him as the beloved Dr. King, and many of us refer to him as such.

But as we read mainstream articles and hear reports and speeches about how far we’ve come on this federal holiday honoring him, it is important that we remember some of the most hateful things that have been said about Dr. King and what he stood for by leaders of and in this country—Black and White—then and now. Why? Many of the conditions that he marched, boycotted, and spoke out against still exist today—racism, materialism, militarism. We celebrate him now, even while condemning today’s activists the same way Dr. King was condemned 60 years ago.

Some regarded him as “too passive” for his position on nonviolent action. Others, “too radical,” for his stance against racism and oppression.

Dr. King was widely disliked for his message of liberation for oppressed people in this country—Black people, Brown people, Native people, all poor people. The year he died, nearly 75 percent of American people disapproved of him, according to a 1968 poll.

His contemporary Malcom X said that “ignorance of each other is what has made unity impossible. Therefore, we need enlightenment. We need more light about each other. Light creates understanding, understanding creates love, love creates patience, and patience creates unity. Once we have more knowledge about each other, we will stop condemning each other and a united front will be brought about.”

It’s true. The sanitizing of Dr. Martin Luther King Jr. along with the message of equality he was preaching, the uphill battle he was fighting, is doing more harm than good to today’s movement for Black Lives and other modern freedom fighters.

I understand the temptation. We are a country led by a racist, misogynist, xenophobic, bigoted bully. Donald Trump is the modern version one of those White men, spitting and shoving and kicking the civil rights activists of Dr. King’s era.

There are people who cringe at the thought of this and wish we could all just focus on the progress, the good of Dr. King and his message, the good of the civil rights movement, the good of today’s movements that are demanding justice for Black men, women, and children killed by police, proclaiming that Black Lives Matter; justice for women in the #timesup movement, girls and women of the #metoo and #muterkelly and missing and murdered Indigenous women movement; justice for immigrants; justice for Indigenous peoples of this land in movements like Standing Rock; justice for trans, binary, and gender-nonconforming people.

It’s a problematically romantic and often White vision of Dr. King as the Moses who led his people to freedom. It’s the discomfort of privilege and the resulting cognitive dissonance that make folks avoid the pain and anger still brewing in oppressed communities. They cannot see how ineffective are their attempts at building bridges—that are still burning.

There’s a saying in some Black church communities about folks like this, “Everybody wanna go to heaven, but don’t nobody wanna die.”

Even Dr. King saw this tendency of White people to too quickly and with too much relief declare success and head home smiling. In his famous Letter from a Birmingham Jail, he wrote:

“First, I must confess that over the past few years I have been gravely disappointed with the white moderate. I have almost reached the regrettable conclusion that the Negro’s great stumbling block in his stride toward freedom is not the White Citizen’s Councilor or the Ku Klux Klanner, but the white moderate, who is more devoted to ‘order’ than to justice; who prefers a negative peace which is the absence of tension to a positive peace which is the presence of justice; who constantly says: ‘I agree with you in the goal you seek, but I cannot agree with your methods of direct action’; who paternalistically believes he can set the timetable for another man’s freedom; who lives by a mythical concept of time and who constantly advises the Negro to wait for a ‘more convenient season.’ Shallow understanding from people of good will is more frustrating than absolute misunderstanding from people of ill will.” I don’t believe Dr. King’s intent was to make these folks feel bad, in fact, I’m sure he wasn’t thinking about their feelings at all. I believe his point was to charge them to get out of their feelings and focus on—not the good but the fight at hand: the threat to justice everywhere.

This means confronting and questioning with courage and confidence all the lies we’ve been told about the history of this country. Even the lies about Dr. King’s successes.

This means pulling back the veil on the atrocities committed by the “forefathers” and subsequent leaders of this country: the genocide of Indigenous people, the enslavement and torture of African people, the plunder and terrorization of Black men, women, and children, the internment of Japanese people, the suppression of women’s votes and voices, the mass incarceration of Black and Brown people.

This means not just apologizing for slavery, but doing something to repair the harm caused by it that persists to this day.

“Dr. King understood,” political activist and North Carolina NAACP leader the Rev. Dr. William Barber points out in a recent article, “that whenever we compromise with a lie about who people are, we empower the political forces that have exploited our nation’s divisions to cling to power.”

If we want this country to be great—for the first time ever—and to live up to the racial justice work of Dr. King and so many others, we can start by telling the truth.

And here’s the truth: Dr. King’s work is not done. Those of us who continue to press forward for the liberation of all oppressed people celebrate him in the work we do daily.