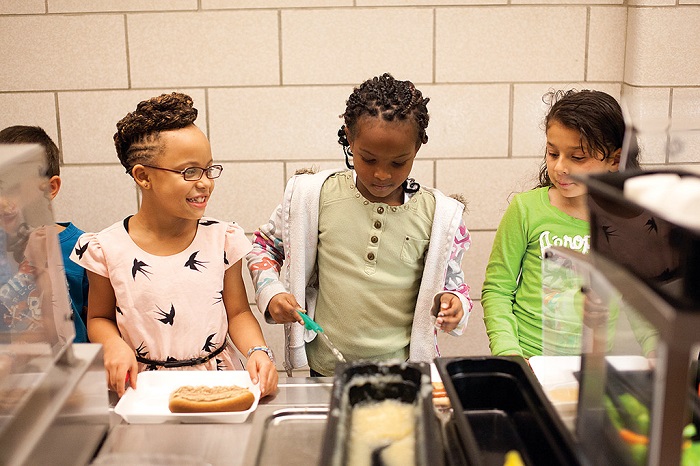 This Fall, Those Free School Lunches That Helped Families During The Pandemic Won’t Return

The healthiest meal students typically receive during the day isn’t at their dining room table — it’s in their school cafeteria.

That finding from Tufts University researchers is just one reason child nutrition experts have urged Congress to pass legislation that would enable schools nationwide to provide free meals for all students. Pandemic-era waivers that made universal free school lunch a reality the past two years have expired, and this fall, students will once again have to qualify for free, reduced or full-priced meals based on need.

That prospect is raising concerns among child nutrition experts who predict that once the school year begins more kids will go hungry amid an uptick in food insecurity in households with children.

“There are going to be many struggling families next fall who don’t apply for meal programs or who don’t qualify for benefits,” said Lori Adkins, president of the School Nutrition Association, a nonprofit representing 50,000 school nutrition professionals nationwide. “The ones that do qualify for benefits, our programs will continue to provide that safety net, but for those that are on the cusp, I’m worried about them. Sometimes it is that single-parent household with children, and they have limited resources, and sometimes they can fall through that safety net.”

Starting in 2020, Congress gave schools waivers that allowed them to provide free meals to every student, regardless of income. But Republicans opposed extending these provisions, arguing they’re no longer needed now that pandemic-related school closures have ended.

Universal meal waivers can help. A report from the Food Research and Action Center analyzed how these provisions benefited 62 large school districts across the country. Ninety-five percent of the districts said meal waivers decreased hunger among their students, 89 percent said the waivers made it easier for parents and guardians, and 85 percent said they erased the stigma associated with free school meals.

“Hungry children shouldn’t have to worry about meal applications or whether they have money in their account so they can eat,” said Adkins, who is also a child nutrition consultant for Oakland Schools in Michigan. “It shouldn’t be a privilege; it should be available as part of the school day for all students along with textbooks and the ride to school on the bus and everything else.”

The federally funded National School Lunch Program (NSLP) operates in almost 100,000 public and private schools and other institutions, helping them serve well-balanced and cost-efficient breakfasts and lunches. School meal prices vary across the country but have cost up to about $3 for lunch and $2 for breakfast in recent years, though pandemic-related inflation has caused food costs to spike. Participating schools are reimbursed for providing meals to students by the Department of Agriculture’s Food and Nutrition Service, which administers the program. In fiscal year 2020, the NSLP served meals to about 22.6 million children each school day, and more than three-quarters of these lunches were offered for no or reduced cost. The meals have been linked to higher academic achievement, improved behavior and better health for students. They have also been found to reduce food insecurity, with youth from households lacking consistent access to nutritious foods meeting most of their dietary needs at school.

“School breakfast and school lunch are meeting the nutritional needs of millions of kids across the country who rely on them,” said Crystal FitzSimons, director of school and out-of-school programs for the Food Research and Action Center.

In June, President Joe Biden signed the Keep Kids Fed Act, a bipartisan bill that gives child nutrition programs at schools and similar environments more funding to cover food costs and additional support and flexibility as they feed students during disruptions to the food supply chain.But the legislation does not continue universal free school meals.

Low-income families, especially those enrolling their children in school for the first time, may not realize that they need to apply for free meals. Other eligible families, due to stigma, fear or language barriers, don’t apply, only to struggle to cover the cost of lunch. Parents with household incomes that qualify their children for reduced-price meals but not free ones often find it hard to keep up with lunch fees as well.

Despite the benefits of school meals, some low-income families may not apply for their children to receive free or reduced-priced meals due to the perception that doing so amounts to taking a government handout, said Jennifer Gaddis, author of “The Labor of Lunch: Why We Need Real Food and Real Jobs in American Public Schools” and an associate professor in the University of Wisconsin-Madison’s School of Human Ecology.  Ending universal free school meals may increase this notion, she said.

“I think it’s definitely going to be a change that pushes some people out who just can’t get over that feeling of, like, ‘Oh, I’m taking something,’ or ‘I’m being dependent on the government,’” Gaddis said.

During the upcoming school year, a family of four earning $36,075 or under would qualify for free meals, while a family of the same size earning $51,338 would qualify for reduced-price meals. Eligibility is based on the federal poverty line. The children of some families, such as those enrolled in the Supplemental Nutrition Assistance Program, formerly known as food stamps, will be registered for free breakfast and lunch automatically.

But some school district officials have objected to the idea of children from economically disadvantaged families getting universal free lunch. School board members in Waukesha, Wisconsin, initially turned down the opportunity to provide free school meals during the pandemic for fear that doing so would “spoil” students. After public outcry, the board changed course and opted into the federal program.

“There’s been a lot of work to try to educate people on how, as long as this is a program that’s not universal, there are a lot of kids and families who might feel stigmatized by their participation in the program,” Gaddis said. “… One of the big barriers is that a lot of decision makers don’t really think of school meals as education, and we’re really having to kind of push against this to say this is actually a really necessary thing for the well-being of all students.”

Plus, free meals for all students mean that schools don’t have to work to collect lunch debt from families who have not provided their children with enough money to cover meal costs.

“It is a lot of pressure on the school districts, because they have to absorb those fees if they don’t get paid,” FitzSimons explained. “So it’s not an ideal situation for anybody involved, and being able to offer meals to all kids is critical.”

When meal debt begins to accumulate at a school, the money used to cover it comes out of the school’s general fund for classroom expenses. So schools aim to keep meal debt low. In recent years, some schools have drawn criticism for using aggressive or humiliating tactics to recover lunch debt from families, including stamping students’ hands, not letting them attend school events, providing them with meals noticeably different from what their peers are served or sending bill collectors after their families. Lunch shaming, as these practices are known, garnered so much attention that in 2017 the U.S. Department of Agriculture issued guidance to schools about how they can resolve lunch debt in a way that doesn’t demean youth. In 2019, 75 percent of school districts said they had accrued debt related to unpaid meals.

As federal action on providing universal free lunch has stalled, some school districts and states are taking matters into their own hands, helping children in a way that enjoys broad public approval.

Through the federal community eligibility provision, school districts with large numbers of low-income youth can offer free meals to all students without requiring families to submit paperwork. In addition, California, Maine and Vermont are among the states that have passed legislation to provide free lunch to all students. Massachusetts legislation to do so awaits a signature from its governor.

“A growing number of states have really understood the value of being able to offer free meals to all the kids in the state and are kind of lifting that up,” FitzSimons said. “Some of the state campaigns take a little bit longer than you would hope. But there does seem to be a lot of …interest and momentum at the state level.”

FitzSimons added that the House passed a budget reconciliation last fall that would allow more school districts to provide free school meals through the community eligibility provision and make it easier for states to do the same. Those provisions are also included in the Healthy Meals, Healthy Kids Act that Rep. Bobby Scott, chair of the House Committee on Education and Labor, introduced last month. The House is expected to soon review this Child Nutrition Reauthorization bill through which Congress updates the NSLP and other child nutrition programs.

“I’d love to see some more long-term, sustainable solutions towards making meals available for all kids each day,” Adkins said. “We’re just hoping that perhaps with the Childhood Nutrition Reauthorization, that bill could include something about meals for all or there could be a new bill asking President Biden and the Congress to extend meals to all students into the future. We’re definitely going to continue to lobby for and work towards meals for all students at no cost.”

Published in Featured News, News and On The Record