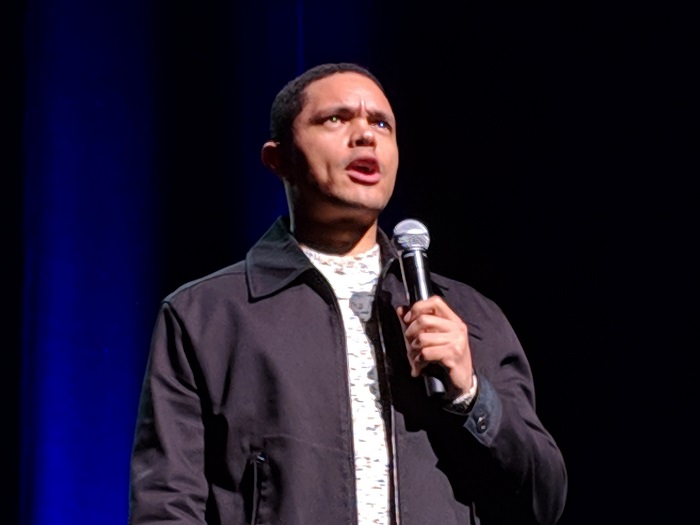 After seven years of hosting The Daily Show on Comedy Central, a hit comedy show produced in the US but with global reach, South African born comedian Trevor Noah has announced plans to leave and focus on his stand-up comedy. During his tenure as host of the political satire series, which he took over from the revered Jon Stewart, Noah has offered important takes on issues in the US – and the world.

Considering that the late-night television satire scene in the US remains populated by white men, Noah has offered unique “black” African insights into issues that affect black Americans. He has also been lucid in talking about issues that have an effect on Africa and Africans. Noah’s knowledge of Africa and African politics has helped him demonstrate that there are few differences between America, lauded as one of the greatest democracies in the world, and global south countries that Trump once called “shithole” states.

Noah’s approach attracted more African Americans than was the case during Stewart’s tenure. A 2017 study by Nielsen Media Research showed that during Stewart’s final season, 84.5% of the viewers were white. Noah lost 40% of the white viewers and gained 16% more black viewers than his predecessor.

He spoke with great clarity on issues such as the Black Lives Matter protests against racism, discrimination and racial inequity experienced by black people, the turbulent Trump presidency, the rise in white supremacy and the global COVID pandemic. By commenting on these different issues, he was able to bring home the inequalities that continue to be seen and experienced in the US.

Noah has defied the odds, offered a youthful, “black” perspective and drawn in a new audience. He will be a hard act to follow – which is what people said of his predecessor.

Growing up and coming of age in South Africa has undoubtedly shaped Noah’s worldview. In his book Born a Crime (2016), and in his numerous stand-up comedy shows, he set out what it meant growing up in apartheid South Africa, with its white-minority rule and policies of racial segregation. Because his father was white and his mother black, he could not have a normal childhood in which he could grow up in the same home as both his parents. It was legally impossible. the Immorality Act prohibited sex between people of different races.

Noah drew on his experiences in South Africa in his role as chief anchor of The Daily Show. In particular he was able to show the striking parallels between present day America and apartheid-era South Africa. He explains this reality in one of the episodes of the show at the height of the global coronavirus pandemic:

Living in this period in America, as much as I hate to say it, a lot of the things that I’m seeing are similar to what we experienced in South Africa. Mass unemployment, a government that doesn’t seem to have the best interests of the people at heart. People who are getting angrier and angrier.

as an African, there’s just something familiar about Trump that makes me feel at home.

He went on to talk about striking resemblances between former US president Donald Trump and several former African presidents such as Jacob Zuma of South Africa, Idi Amin of Uganda and Robert Mugabe of Zimbabwe.

I argue in a book chapter on political satire that the comic offers important ways of criticising those in power. During his tenure at The Daily Show, Noah has used comedy and satire to discuss diverse pressing contemporary issues, in the US and globally. As he has explained:

I believe in the importance of jokes. I will never lose that. I always tell people, ‘Jokes are what made me’. That’s how I see the world.

Before joining The Daily Show, Noah was an established stand-up comedian. In South Africa, he was known for satirising Jacob Zuma during his presidency for corruption and his role in state capture.

Comedy has allowed him to deal with difficult subjects in a lighthearted way. He has stated that:

I’ve loved trying to find a way to make people laugh, even when the stories are particularly s—, even on the worst days.

Noah has infused the comic into his anchoring of The Daily Show and managed to tackle controversial topics in a cheerful yet hard-hitting way.

Being a foreigner in the US, Noah has the necessary distance to offer sobering analyses of current affairs in that country. Through his examination of the Trump presidency and the Black Lives Matter movement, he has shown that the idea of America being “exceptional” is an illusion.

At the height of the Black Lives Matter protests in the US, he took to The Daily Show to give a grim yet poignant monologue about race in the US. Noah traced the chain of events that went beyond the killing of George Floyd, a black man who was suffocated to death on the side of a road by a group of white policemen, to show the precarity of black lives in contemporary America.

The monologue is sharp, knowledgeable and nuanced in its explanation of what was happening in the US. He grounded it on historical events to show that nothing was new. The US was not exceptional. The US democracy was as imperfect as that of the many countries that it had preached to for many years.

It has taken a late-night host from outside the US to point to the failings of the US and its democracy.

The late-night circuit will be different without Noah, the only black and African host of a late-night show in the US. Because of his intimate knowledge of global popular culture, he has had a youthful viewership.

His peers do not have the same perspective or viewership. If Noah replacing Stewart was seen as a daunting exercise, filling the shoes of Noah might prove to be even more challenging.