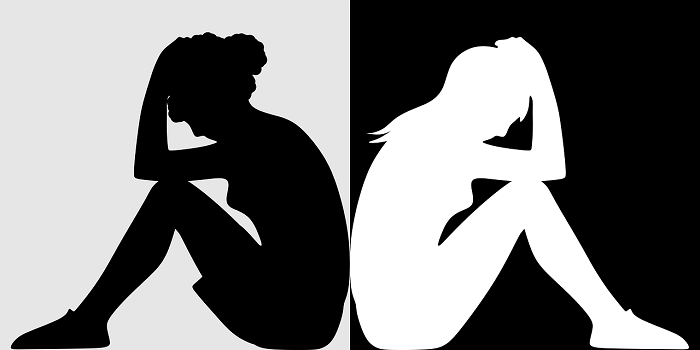 What A White Woman Would Do

It’s been 20 years since I started giving my friends the advice, “What would a white girl do?”

It began as an urgent appeal to my sister, who, while we were in college, had gotten into a physical fight with her roommate. The girl bit my sister on her shoulder, leaving a gross purple bruise and a bite mark. It was early in the day, and my sister, accompanied by a friend, walked several blocks to my apartment.

When I opened the door, my sister unraveled in tears. She was trying to pull herself together to get to class only to then, after class, go on to work. My sister worked as a waitress in a new trendy French cafe in what was becoming a gentrified Brooklyn: She knew she would be too much of an emotional mess for work. She was crying that she was sore, exhausted, and emotionally all over the place. But still, she expressed her obligation to show up.

She and her friend looked at me in disbelief, and we all fell silent. It was as if a light had switched on. We brainstormed over “What, exactly, would a white girl do?” She would call the police; she would make a police report; and possibly seek medical attention. One thing we were certain she would not do, however, was feel obliged to swallow her hurt and show up for class or work.

I am painfully aware of the failure of generalizations. While the hard-working defensive white woman doth protest, I assure you, tears are never an option for Black women. We were raised in homes, by Black parents who demanded we stop crying and wash our faces, before an even harsher fate should befall us. My generation—X—is grappling with the fallout of not being allowed to cry, even in the face of physical pain.

I know all women carry the burden of our emotions being passed off as irrational or even “crazy.” However, through a lens of generational trauma, consider what was crazy for Black women in antebellum America. What was the consequence for showing fear, even emotion, within the confines of a sadistic system like chattel slavery?

Since the episode with my sister, I have often returned, in moments of emotional overload, to this question, “What would a white woman do?” For me, it is a source of validation when I need more for myself or need to reserve space to process, or even to vocalize emotions. I have learned to get in touch with “my inner white girl,” because I see white women express a range of emotions while others in society are simply ridiculed or ignored. Given that race—and indeed gender—are constructs, are other identities as protected as white women? The rewards for dependence and emotional frailty are “written into” the identity of white womanhood. The reverence and deference afforded to light complexion and white people are well-documented. In the same way that white men’s emotions are normalized and never questioned (recall the way in which Trump was never said to be angry or emotional, his responses mostly justified to any offense), white women’s cries are validated. White women have societies’ permission to express their feelings, whereas Black women still work to identify and claim theirs.

I found, as a child and young woman, that whenever I would resort to tears, my mother and a few other adults in my life would listen to me. White women have become known for this phenomenon of crying easily and using crying as a tactic to persuade. I was often frustrated by the dichotomy that my calm and simple observation was at times corrected, or even ignored, but tears would be heard by some.

After the birth of my son, I was shocked at his ability to speak to his emotions. I noticed that, from very early on, he had a clarity to what he was feeling and why. Whereas my daughters often masked any negative emotion (“No, nothing is wrong,” they would respond through stoic withdrawn expression), my son could articulate exactly what was bothering him and why. I am painfully aware that these are differences determined by “nature or nurture,” and while I think of myself as unbiased between my son and my daughters, I am aware that bias can be unconscious. And more significantly, no child is raised in a bubble—often, the influence of the outside world has a heavy impact on children.

Perhaps that is why men walk around asking women to “smile” all the time. They are aware of their emotional need to be validated, and they do not hesitate to demand a woman’s participation in caring for their needs.

As a Black woman, I was always taught to look out and observe others, and consider their needs, long before I was able to assess my own. My parents: my mother, a WASP from Portland, Oregon, and my father, who narrowly escaped sharecropping Mississippi, never afforded me the security of “fixed” identity. I rebuke the term “biracial” because I find it offensive and a nothing more than a polished, refined, modern-day version of “mulatto.” I assert that race is a construct, not a biological fact. I identify as Black, not only because of my culture, but because of my childhood experiences and all the political weight of identifying as such. I grew up without being able to seek refuge in the shelter of a “racial” identity, and without any images in the media, or in any history book, of people like myself. Classmates often asked my sister and me, “What are you?”

To consider, “what a white woman would do” in my personal relationships continues to be a sort of kaleidoscope. Offering ever-nuanced colorful insights into casual misgivings on love, learned behaviors, support, and entitlement. While I reconcile my own needs to be heard, and respected, I find more insecure parts in the balance. Oftentimes, after cruel words or neglectful behavior in relationships, Black women will confer with friends, and move on with Teflon ironclad strength. We sing songs that confirm our independence and are champions of the refrain, “I can do bad all by myself.”

Meanwhile, our white counterparts are allowed to “fall apart.” White women allow themselves a “need to be taken care of.” In fact, a white woman can “not know what to do without” the object of their romantic love interest. Frailty and vulnerability, together with demure possession, are cornerstones in the Victorian imprint on femininity and womanhood. And while white women are protected and treated as the “weaker sex,” Black women have been cultivating a culture of matriarchal strength and endurance.

Perhaps as a result of the deeply ingrained belief that Black people do not experience pain, Black women are three to four times more likely to die during childbirth. Have you ever been annoyed by someone’s cries for help? I struggle to clarify whether the issue with which I contend is the act of crying itself or whether those cries are even heard. Carving out space to cry in a world where your physical presence is contentious can be laborious. I find myself giving me permission to cry and negotiate—with my own self—whether or not I may or may not experience and ultimately release pain. And crying in front of others is excruciating.

The world in which we live is reciprocal: Reality is my internal dialogue about myself, and the external world’s reception of me. While my pain and anguish is mine alone with which I must cope, the collective society around me may or may not deem my suffering worthy of acknowledgment. Or, conversely, my joy and accomplishments. During a time in which we celebrate “Black Girl Magic,” I challenge you to consider two things: the comfortable safety of being extraordinary in your mediocrity and “Who is ‘the girl next door’?” Because whiteness is, if nothing else, highly valued and richly rewarded conformity, normalcy, and glorified mediocrity.

My aim is not to convince Black women to be less magic. I want to explore the advantages of being seen and acknowledged in the throes of vulnerability. The power of being able to share, ask for help, and all the benefits of breaking down in tears. Or even speaking out and defending oneself from that wounded place.

When my teenage daughter was in a car accident and broke her wrist, the doctor tried to send her home from the hospital with three pills to cope with the pain. I performed in my best Shirley MacLaine in Terms of Endearment, and became frantic with concern that my daughter would be in pain. I bluntly asked, “Are you afraid we will sell them? You want my daughter to be in pain? She only has relief for pain tonight and tomorrow?!” And worked myself up into a crescendo of panicked shouts.

Herein lies the method, precisely the behavior to which I call your attention. Rather than becoming angry or irate, my pleas and demands came from a demanding place of entitlement for care and outrage over anything less. Over the years, I have learned to identify an echelon of comfort and defend it in even the most entitled unruly of means.

While we see white women calling the police to assert power for various trivial motivations, we cannot step over the fact that white women, more than any other group, voted for Trump in 2016 and 2020. What this uncomfortable truth reveals is that the system works for them. White women comfortably rely on the systemic dissemination of power to protect and care for them. Behind tears and frantic cries for help, each obtains their prospective objectives. The power of a white woman, perceived wounded or violated has, throughout history, rallied cavalries.

I refused to let my sister go to class, or work, that day. I kept her at my place and nursed her with love and support. In the long tradition of sisterhood, I cared for her. I provided my shoulder, upon which I invited her to cry. We do this in a variety of ways, Black women, that is; we care for each other, and provide safe space to heal and share. In the absence of empathy or compassion from others, especially society at large, Black women have mastered the art of soothing tones, encouraging words, and honest tenderness. And I won’t go on about this, for fear of regurgitating Mammy tropes of the capability of Black women’s ability to care for others—my focus is how can Black women take better care of themselves in the face of others’ demands.  Whenever I am faced with emotional ambivalence, or a sense of duty to others in competition with my own emotional needs, I ask, “What would a white woman do?”