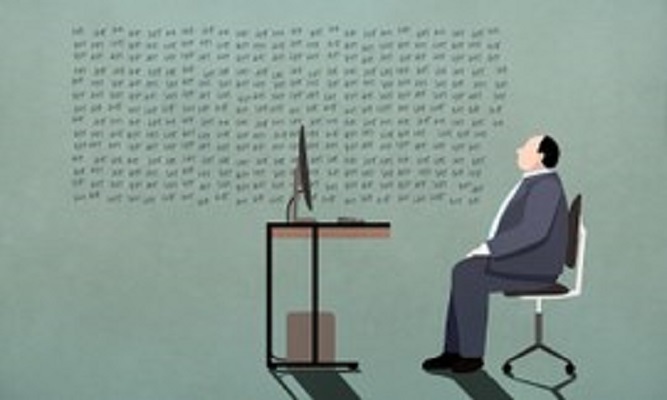 What Low-Wage Work Does to Us

“Cyborg jobs” is the term Emily Guendelsberger uses in her new book, On the Clock: What Low-Wage Work Did to Me and How It Drives America Insane to describe the low-wage, high-stress jobs that make up a large portion—something like 47%—of employment in the United States.

You could say they’re jobs determined by algorithms. Cyborg jobs are designed through data analysis to boost profits by getting the maximum out of workers. Staff scheduling is tight to avoid slow periods, so workers spend much of the day rushing to where they’re needed. Bathroom breaks are limited and timed. Workers’ movements and performance are monitored throughout the day. If they call in sick, they lose pay and maybe even their jobs.

But human beings are not robots. Being treated like expendable parts in a gigantic corporate machine makes people stressed, ill, and unhappy. Guendelsberger should know. She took on low-wage cyborg jobs for two years. Then, she took on the big companies that profit from them, like the other writers of fiction and nonfiction here—Rob Hart, Heike Geissler, and Alex Gallo-Brown.

The screen flashed and a new question appeared.

Do you believe it’s morally acceptable to steal in some circumstances?

Green Yes, red No. That was easy. No.

If your family were starving, would you steal a loaf of bread to feed them?

Would you steal from your job?

What if you knew you wouldn’t be caught?

Paxton wished there was an I’m-not-going-to-steal-anything-please-let’s-move-on button. No.

If you knew someone stole something, would you report him or her?

He almost pressed No, having gotten used to the repetitive tap, then jerked his hand away and pressed Yes.

If the person threatened to harm you, would you still report him or her?

From The Warehouse, a novel by Rob Hart, published by Crown, 2019.

But aren’t you in pain? you ask.

Sure I am, Hans-Peter replies, or I wouldn’t need this stuff—he pats his pocket.

You’d be better off at home then, you say.

Well I can’t stay home, I can’t, I’ve got to be here now, Hans-Peter says.

But if you’re sick? you say.

You could talk that way forever and you will talk that way a few more times, and in a few days—once you’ve got sick and then recovered again and you’re told to work right next to the roller door that doesn’t shut properly so that a coworker of yours doesn’t have to work there—you’ll go to that workmate and say you’ve just been sick so you really want to work in a warm spot and not in a draft. He’ll shrug and you’ll realize he’s sick right there and then, his eyes are watering. You’ll put your hand on his forehead and feel how hot he is. You should go home, you’ll say. He’ll shrug again and say he wants to be taken on permanently, though. You’ll repeat that he ought to go home but he won’t be put off, and you’ll end up working in the draft—shivering, sweating, shivering.

“The Job at the Technology Cafe”

He has never felt old before, but he feels old now. In three months he will be 29. Next year he will turn 30. He has always worked in food service, has never made more than $12 an hour. The minimum wage in Seattle now is 15, but there are exceptions, loopholes. At his new job, for example, he will be paid 13.50 even though his employer is one of the richest technology companies in the world.

He stares out the Metro bus window as streetlights penetrate the early morning dark. He feels the way that he feels in dreams sometimes or the way he moves underwater. He is not a morning person and he never has been. He is not really a work person, either (he would prefer not to, as the character in the story from AP English said), and for a moment he has forgotten why he accepted a job that requires such indecency.

He trudges up the office building steps, mist sipping wetly against his cheeks. Inside, it is brighter, warmer. He flashes his badge at a security guard before stepping into an elevator and thumbing the button for the seventeenth floor.

Life is change, he thinks as the elevator begins to move. Cities are change.

Isn’t that what all the newspapers say? He doesn’t know much about other cities but remembers the moment when his own neighborhood began to change. The squat house on the corner knocked down and two skinny towers erected in its place. The blue house across the street shoved onto stilts and literally lifted off the ground. The new Audis and Beamers. The men in suits and ties.

One summer when he was in college at the U he delivered a pizza to one of the new houses on his parents’ block. The woman who answered the door had been aloof and dismissive. And she left him a shitty tip.

Life is change, he thinks as the elevator dings. Cities are change.

He steps out of the elevator into a silent and unfamiliar dark.

When Carlos called last month asking if he needed a job, he told his friend no. He already had a gig working front-of-the-house at a cafe on Stone Way, and while the situation was not ideal—the tips were shit and his boss’s son Adam could be a real pain in his ass—the cafe was walking distance from his apartment, his hours were flexible, and he brought home enough free food on most days that he rarely needed to cook.

Lately, though, things had gotten harder. It was not only that his own rent had crept up—from $600 when he moved in to $750 today. It was that the whole city seemed to have turned upside down. Close friends moved away because of the sudden surge in rent. Restaurants that he grew up in closed down and disappeared. Bowling alleys had become luxury condos. Used bookstores transformed into upscale cafes.

It was like one day he was living in one city, the next he inhabited a totally different place.

So when Carlos called at first he thought that it was a joke. Work inside a tech company? There was little he could imagine that he would rather do less.

The next week at work, though, sent him over the edge. First, Adam chirped at him about the temperature of his lattes—not so hot! the little prick cried—and then the night barista forgot to clean the espresso machine, which made his Tuesday morning hell. When a regular—a graying baby boomer who bought a house in Wallingford back when real estate was cheap—engaged him in a conversation about pensions versus 401ks, he decided that it was time for him to go.

He would be a cook, he thought, but not only a cook. He would also be a spy. Something exciting for a change.

From “The Job at the Technology Cafe,” a short story in Variations of Labor by Alex Gallo-Brown (2019). Appears by permission of the author and Chin Music Press.

Depression and anxiety are perfectly normal reactions to the insanely stressful world we’ve built for ourselves. Suppressing our humanity is exhausting. It’s driving us crazy. It’s ruining our experience of life. It’s making us sick and terrified and cruel and hopeless. And it’s killing us. …

Escape is possible; things don’t have to be like this. The current way we’ve arranged our society is not inevitable, and it’s far from natural. America got this way because we spent the past half century outsourcing the running of society to technology, data, and free markets—even though none of those things can tell if everyone’s miserable. …

Because, seriously—it’s up to you.

Emily Guendelsberger, On the Clock: What Low-Wage Work Did to Me and How It Drives America Insane, Little, Brown, 2019.