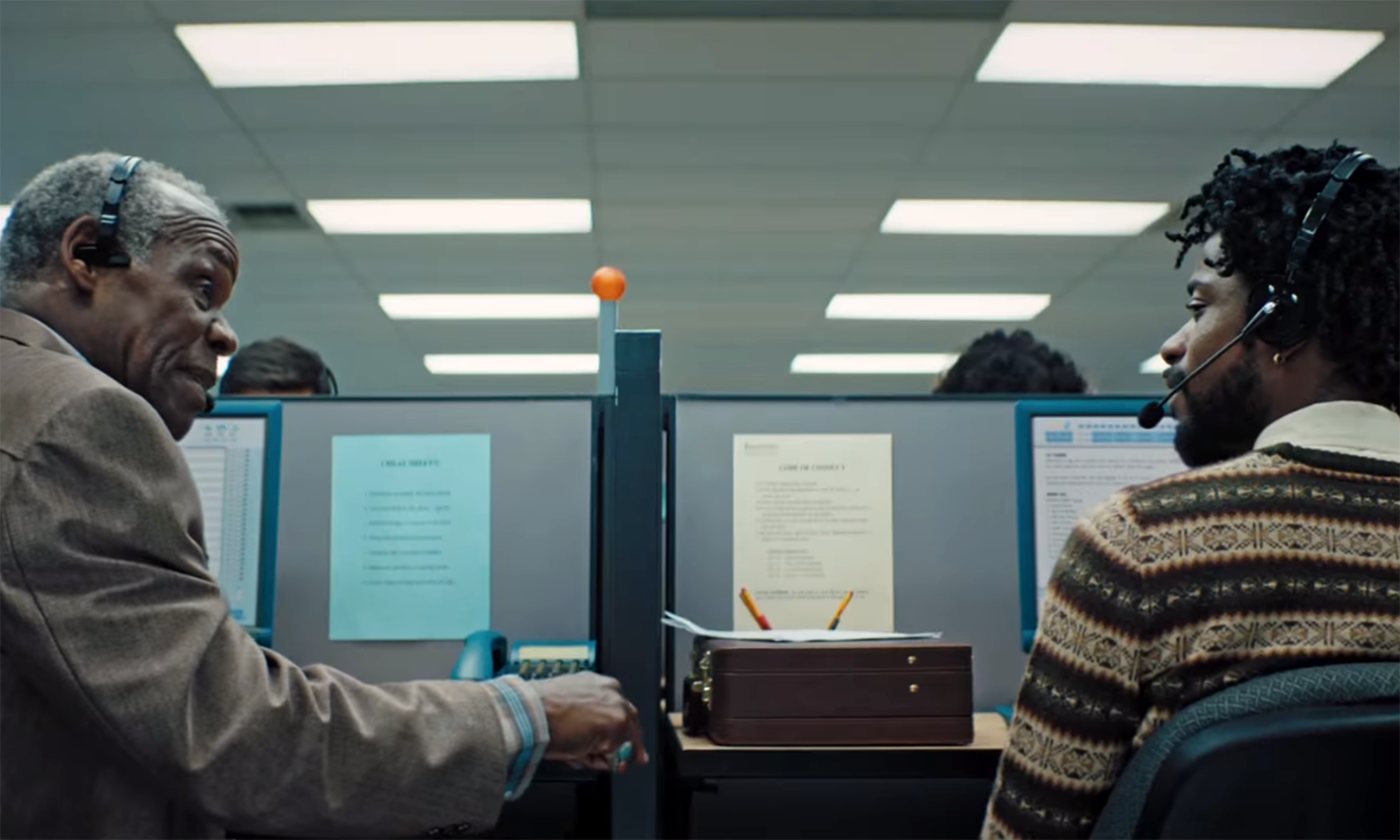 What the actor wants that “White voice” to tell us and how we’ve gotten the American Dream so wrong.

Boots Riley’s debut film, Sorry to Bother You, offers a renewed sense of urgency in how we respond to the racist and capitalist divides that impact us all. Satirical, dystopian, part sci-fi. Emotionally and intellectually, it’s everything we didn’t know we needed.

Cassius “Cash” Green represents many unemployed young Black males looking for work and their subsequent climb to the top after they finally land a job. After getting a low-level telemarketing position, Cash learns the secret to how many people of color get ahead—assimilation. His “White voice” talent propels him to success, and after being struck in the head by a soda can thrown by a protestor, he eventually becomes a viral sensation for Coca-Cola. But his success means leaving behind his multicultural group of co-workers who are organizing a strike for higher pay. He must choose between individual success and greater good, individualism and collectivism.

I spoke with actor and activist (and YES! Media board member) Danny Glover to talk about the film and his role as Langston, Cash’s older co-worker who helps him discover his secret to success. Warning: Some parts of the plot are spoiled below.

This interview has been condensed.

Zenobia Jeffries: This film deals with all the societal “isms” that challenge us daily—racism, classism, capitalism, sexism. Even viralism—I just made that one up. But I first want to start with your character, Langston. I found it interesting he, an older Black man, gives the younger Cassius “Cash” Green the secret to success—using his “White voice”—yet he’s not used it himself to advance.

What is there to be said about code-switching today versus when you were younger?

Danny Glover: The illusion that we’ve made some progress is just that.

[Cash] would think that millennials can use their own voice. They don’t have to specifically use a “White voice.” It may have been the case in my generation, and it could be in this sense that Langston knows that you just can’t get by and be expected to succeed … race is still an issue. Even though millennials tend to think we’re out of that right now, we’re postracial.

The idea that we’re postracial is trumped by the fact that I tell him to use the White voice, and he uses [it] and becomes successful.

We realize the key to success is always going to be that.

“People have always had to organize in some sort of way to deal with injustice.”

Jeffries: What was it about the script that made you want to be a part of the film?

Glover: Sometimes you read a script and you don’t know what the outcome is, you don’t know whether even the director can execute what his vision is. But the idea that somebody comes up with this company called “Worry Free,” [Cash’s client, the world’s leading provider of indentured servants].

[The film speaks to] the process of alienation and the kind of propaganda that goes around what is considered the good life, the translation of the American Dream. So when does the American Dream become “worry-free”?

The idea of the American Dream in a sense is a euphemism for something else that certainly, in the real world, has no foundation basically. It’s always been that commodification of the obtaining of material objects. Whatever it is, it’s always shifting. At one point the American Dream was to buy a house, have your job for 40 years, and then retire. Buy a car.

So all those kind of things epitomize this vision of prosperity. It doesn’t in any way envision what it is in terms of human transformation, or the needs that human beings have for basically being whole—spiritually whole and everything else. It assumes that what you buy in some sort of warped way has this profound impact on your spiritual well-being.

People have always had to organize in some sort of way to deal with injustice. And that’s part of what is happening. It’s not often glorified within the American Dream, but that’s a reality of it, too.

Jeffries: There has been an increase in movements organizing around economic injustice, like Occupy and those to raise the minimum wage. What messages do you hope people take away from the film?

Glover: The overall messaging? I would hope that people are entertained by the project in itself and the imagination around this project.

This is a Black filmmaker. Black filmmakers don’t always get a chance to make such films as intuitive as this, and which have so many different kind of references and bring about so many diverse [issues] in one place. And in a sense, some would say it’s unreality, that the film raises.

The film has that element to it, people standing up organizing [around jobs]. But there are some other things. The 20th century and the 21st century [are] the [periods] of self, self-adornment, all these things that do not correspond to building community.

I think young people, or millennials, are inundated with this whole image of themselves as separate from anything, seeing themselves disconnected from community. What happens with building community is the community has its own objective and validates itself thought substantiating itself as one. It does not in any way dismiss the individual, the individual’s needs. But the community needs become much larger than the individual needs.

“I’ve been fortunate to be in some films which I think spark discussions.”

Jeffries: Is there a specific type of activism you hope the film will spark?

Glover: I’ve been fortunate to be in some films which I think spark discussions.

The interesting thing about the Color Purple is the issues around the exploitation of women, spousal abuse, and other aspects like that, which adds to an enormous discussion. It was phenomenal back in the day, and that same discussion is going on right now as in 1986.

This film complements so many of the discussions that we have today around labor, around collective bargaining, around organizing, as we see happening now, whether it’s the teachers in West Virginia, Arizona, the gentrification of our communities, the lack of affordable housing, the lack of living wages. All these things.

One thing that I hope it really generates is the sense of necessity to mobilize and organize.

Jeffries: The reality show in the film, I Got the Sh#*@ Kicked Out of Me, was perfect. What is there to be said about the weight we give to reality shows and viralism of social media fame?

Glover: I’m kind of old-fashioned about that. Even though it’s a part of our everyday way in which we conduct ourselves in the world, I don’t put too much of my attention on that.

When I think about that, it’s the antithesis of building community. It plays more on the chaos communities have felt. It makes me think of Martin Luther King’s [speech] “Where Do We Go From Here: Chaos or Community?”

I live in San Francisco, where I’ve worked in the Mission District, which is mostly Hispanic. I watched in some sense the gentrification of that community. I was there eating in a restaurant, and I saw all this incredible nightlife, it almost reminded me of some aspect of the West Village of New York City, and it had an impact on me. There had been Mexican restaurants and people shopped there, and it was defined by the people who lived there and was defined by the language, whether [from] Nicaragua, Mexico, or wherever. There was something special about that, and [then] I didn’t see that anymore. I just saw the nightlife, and adjacent to that were people living on the street.

“You crush one movement, and another arises.”

When I think about all the things we have on our plate, one of the major questions [that comes to me is], “Who are we in this part of the 21st century?”

Jeffries: In the current sociopolitical climate in which we find ourselves, it almost feels like no matter what we do, the folks in control are still winning and we’re losing. The film gives an example of that when Cash blows the whistle on Worry Free’s slave labor and experimentation on humans.

Can you talk about the importance of being persistent in mobilizing and organizing, no matter what, when you’ve done all you can do?

Glover: “All I can” is a physical manifestation. I don’t know how we look at sustainable activism in a way, because [of] all the things that happened historically.

I just listened to a program about bananas when bananas were king. And it takes us through that period in Central America [of] United Foods. I was thinking about all [that] history. We live in this very contrived, very short period. Most of our life of activism, if we’re lucky, is 50 years. So within that period, what I’ve taken into account is what happened before we got to where we are.

When I was 20 years old in 1966, I thought the revolution was now. In that point and time, I didn’t see myself living past 40 years old. And in some romanticized way, we look at this thing in our youth.

But also, you can feel in the air—at least in the public space you occupy—you see the language change, you see the attitude change, you see the bodies changes, you see all these particular things that brought us to that moment. At the same time something revealing in our selves the manifestation of what our moment is.

We don’t take into account where we’ve gone. It is movement.

The Black Lives Matter movement, that doesn’t go away. You crush one movement, and another arises.

All those White kids [from Occupy], they either got bought off or they were in some sense [suppressed]. [But] what came out of that? “The 1 percent.” There wasn’t the term used [so widely] before, that I can remember.

What I’ve learned in my 72 years is that something is happening. We have to encourage that. Understand its relationship to the past and perhaps in what happens at this moment. Revitalize it [through] radicalism, because it’s only been radicalism that has altered this country, knocked it off its axis of what it sees as its predetermined destiny.

Jeffries: One example of what that radicalism would be?

Glover: It’s a thought process. It’s like the Sweet Water Foundation in Chicago. Emanuel Pratt took an old shoe factory and then converted that into what he calls aquaponics, an urban fishery. We’re talking about how do we revitalize this community? How do we transform ourselves?