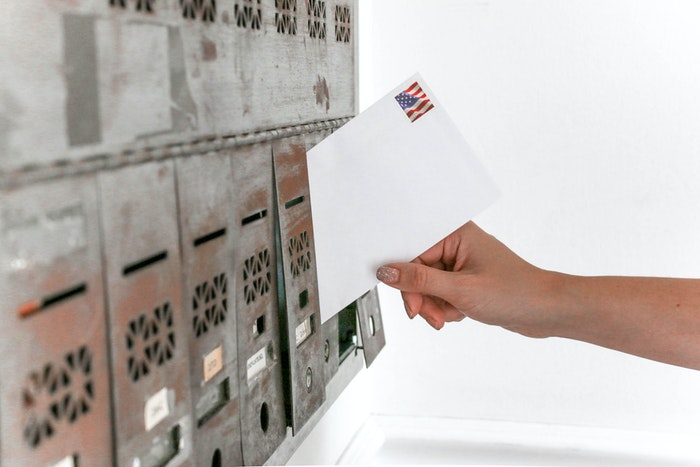 President Trump’s plan to destroy democracy was on full display last week, as he made the  U.S. Postal Service his new battlefield, with Postmaster General Louis DeJoy leading the charge.

This is coming at the worst possible time for the health of our nation, because mail-in voting is expected to surge in November as Americans stay home to avoid the COVID-19 pandemic. And for many Americans, especially those in rural communities and people (including 330,000 veterans) who receive their medication by mail, the post office is a lifeline.

The reason for Trump’s action is clear: He assumes voting by mail favors Democrats (many absentee voters traditionally are seniors, who have been one of Trump’s more supportive demographics). He believes he can only “win” reelection if he makes it impossible for large numbers of people to vote by mail. So he’s drummed up the entirely false accusation that voting by mail leads to fraud (it doesn’t; it’s the most secure method) and claims that mail-in voting can be manipulated by China or Russia (it can’t).

Let’s count the ways he’s doing this, just to get them out of the way:

1. DeJoy, who is also a major Trump donor, has ordered postal carriers to leave mail behind in the distribution centers if the trucks are not loaded in time. (Mail carriers used to wait until the mail was ready before trying to deliver it, and even made multiple trips if necessary. Those late trips also were curtailed, as was overtime pay for postal workers ensuring the mail reaches its destination.)

2. Mail sorting machines have been removed from sorting facilities across the country and in some cases destroyed.

3. Mail drop boxes have been removed from cities and communities across the country.

4. DeJoy has said some states might need to raise the price of postage for ballots.

This all happened right before Trump himself requested an absentee ballot from Florida, followed days later by voters in North Carolina receiving applications for absentee ballots directly from the Trump campaign. In his effort to distinguish between voting by absentee ballot (good enough for the president) and “mail-in voting,” Trump has focused on framing the latter as a fraudulent scheme by Democrats, despite the proven security and efficacy of five states that conduct nearly all voting by mail, and have for years. (He also had his ballot sent to Mar-a-Lago, and there are ongoing lawsuits over Trump’s use of a business as his legal address.)

After a public outcry, DeJoy has now said he’s halted the removal of the blue mailboxes and sorting machines, and will allow mail carriers more overtime. He’s refrained from saying whether he’ll restore those services, and at this point, this administration has long lost any right to the benefit of the doubt that they’re not deceiving us.

So, the theory goes: mail-in voting gets suppressed, or at least damaged enough that a huge number of ballots are not received by voters in time to have them delivered by Election Day, Trump declares victory on election night (if he has a narrow Electoral College lead), or cries “fraud” and demands that no mailed-in ballots be counted (if he trails Biden narrowly). Then, he and his campaign sue to stop ballots from being counted, even in those 20 jurisdictions where mailed-in ballots are accepted so long as they are postmarked by Election Day (or by the day before Election Day, in some cases). If necessary, Trump gets his allies in Republican-controlled swing states such as Pennsylvania to submit a slate of Republican electors to the Electoral College, even if Biden leads in the state after Election Day. It’s the 2000 election’s “Brooks Brothers Riot” all over again, except it’s playing out in multiple swing states.

But there’s another benefit to this in the minds of many Republicans and “small-government conservatives,” aside from a (fraudulent) Trump victory. It also helps along another long-held Republican goal: forcing the Postal Service into financial jeopardy, then using that as an excuse to privatize the mail.

The USPS doesn’t “lose” money, it costs money, because it’s a service, not a corporation.

We’re already seeing the usual talking points trotted out, such as this one from Richard Grenell, the former Acting Director of National Intelligence, in which he cited the Postal Service “losing” $69 billion over the past 11 years. Naturally, Grenell did not mention the 2006 law that, in part, requires the Postal Service to fully fund retirement pensions 75 years into the future—a financial burden not placed on any other government agency or service, and a part of the law only included at the insistence of President George W. Bush’s administration.

Here’s the thing: The USPS doesn’t “lose” money, it costs money, because it’s a service (check the name), not a corporation. All government operations cost money, none more so than the military. So why this animus toward the mail?

Well, it’s not just the mail. Republicans have long worked to privatize or outright eliminate the Environmental Protection Agency, and the Department of Education, and the Department of Commerce, and the Department of Energy, and many others. In many cases, Trump’s appointees have been long opponents of the very agencies they were named to lead, such as Education Secretary Betsy DeVos, who never attended public schools, long supported religious charter schools, and has had investments in student loan recovery companies.

Ever since the ink was barely dry on the New Deal, the modern Republican Party has been working on a long-term project to turn back the clock, not just to a fictitious time of happy White suburban families in the mid-20th century, but to the era of the robber barons of the 19th century. Government, the theory goes, is only good for sending the Army off to fight a war abroad and keeping the rabble in line at home. Taxation is only for those not rich enough to buy their own exceptions to the tax code.

Under this theory, everything that is a “service” would be on the cutting block, and people are sometimes surprised to learn just what the federal government is paying for with their tax dollars. Cut the Agriculture Department? No more school lunches. Cut Commerce? Say goodbye to the National Weather Service when hurricanes and derechos are hammering the U.S. with increasing frequency. Cut Energy? Well, it’s a backward way of eliminating nuclear weapons, but the Energy Department is also the largest government researcher in the physical sciences. Cut Housing and Urban Development? Your local fire department might not be able to replace its trucks, and your sidewalks might not get built, because HUD funds the $3 billion Community Development Block Grant program in all 50 states.

We saw what happened at the State Department: after former Secretary of State Rex Tillerson decimated the diplomatic corps, leaving multiple ambassadorial posts unfilled, foreign policy was largely delegated to Jared Kushner, Trump’s son-in-law and the patron saint of grifting. Ambassadors now apparently only serve to drum up business for Trump’s failing golf courses and resorts. The goal is the complete capture of government agencies by the industries they are supposed to regulate, turning them into vehicles solely to funnel taxpayers’ money upward to corporate overlords and their allies in government leadership.

So, yes, Trump’s attack on the U.S. Postal Service is about the election, but it’s also just one small troop movement in the greater war on government oversight… or even competent government. Republican activist Grover Norquist is most known for his famous line, “I’m not in favor of abolishing the government. I just want to shrink it down to the size where we can drown it in the bathtub.” His advocacy group, Americans For Tax Reform, has helped drive the Republican agenda ever since the 1980s, when deregulation fever caught hold in the Reagan administration and never let go.

So far, Congress’s response has been weak. Both houses went on recess without passing legislation to bolster the post office (and without passing a pandemic recovery plan, either). After much outcry, House Speaker Nancy Pelosi called the House of Representatives back into session, and the House is scheduled to vote Aug. 22 on a $25 billion funding bill to support the Postal Service ahead of the election, but it’s up in the air if the Republican-led Senate will pass it, or even give it a hearing.

This train can be derailed, and we are still having an election on Nov. 3. There are competing sets of recommendations for how to handle the crisis at the post office, but they all boil down to “vote early.” Request your ballot as soon as it’s possible in your state, then vote at the first opportunity. Here’s a list of early voting deadlines.

While it may be counterintuitive, your best bet in making sure your ballot is counted is to find out where in your state you can drop off your ballot, at either a local elections office or in a designated drop box if they are available. Your state’s elections office should have this information on its website.

Calls to “#SaveTheUSPS” are poignant, but if Trump wins reelection, the Postal Service (and many other services) will likely die of criminal neglect anyway. The post office won’t disappear if you hand-deliver your ballot this year. A different administration will be more likely to save the post office permanently, and maybe the rest of the defunded and hamstrung government, too. It’ll take a lot of work, but it’s what’s necessary to stop the slide back into an age of even bigger monopolies and unchecked exploitation.

We won’t get another chance to do this. Decades of Republican planning are now coming to fruition before our eyes. We’re in that bathtub right now, and the water is rising.