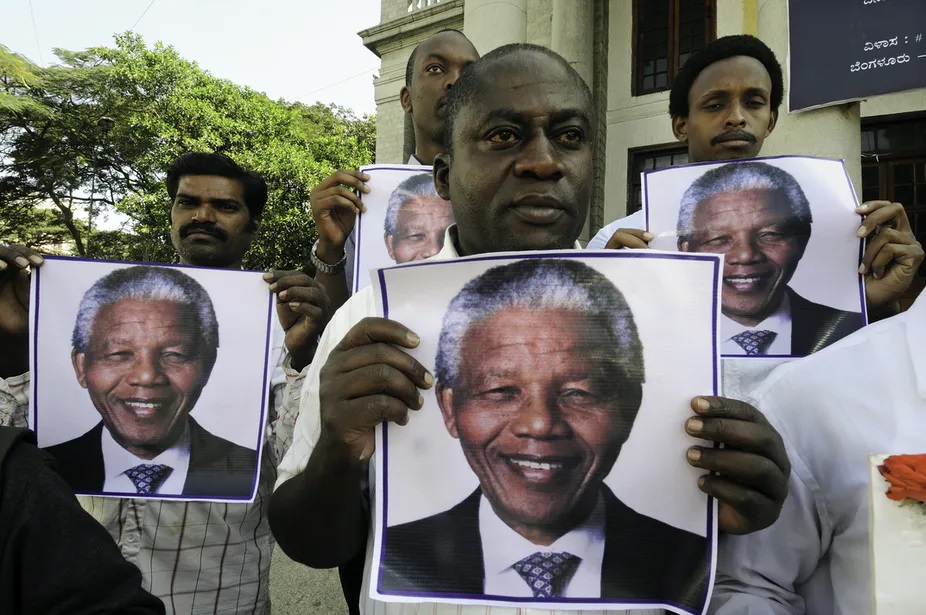 Mandela was a flawed icon. But without him South Africa would be a sadder place

I was one of the thousands who watched Nelson Mandela, the South African liberation struggle hero, leave prison on 11 February 1990, and then mount the podium in front of Cape Town’s City Hall, expressing the hope that the apartheid government would agree to negotiations so that there might no longer be the need for armed struggle against apartheid to continue.

Today, the majority of South Africans, black and white, recognise that apartheid has no future. It has to be ended by our decisive mass action … We have waited too long for our freedom.

He appealed to white South Africans to

join us in the safety of a new South Africa. The freedom movement is a political home for you, too.

I was thrilled but also, underneath that, felt concern about the forces against him. I worried about the violence the apartheid military and its proxies would unleash.

I fretted about what I’d seen during my decade of membership of the African National Congress (ANC), the leading liberation movement for which he was jailed: the seeping corruption, elbowing for position, the exile old guard’s insistence on primacy. And, as he left prison hand in hand with his wife, Winnie, I feared the influence of a woman who’d already been convicted of kidnapping, and accused of so much more.

As I will show, these concerns were borne out. But, three decades on since his release, it still feels that without Mandela South Africa would be a sadder place.

The “Great Man” take on the past so often misses the undercurrents that keep greatness afloat, and yet there are few moments in recent world history where one person made quite such a difference.

Mandela’s extraordinary gifts – his integrity and self-discipline, intelligence and intellectual curiosity, depth of perception, strategic vision and tactical nous, and his steely resolve – set him apart. Towards the end of his 27 years in prison, that meant leading in a direction that felt uncomfortable to some, through conducting secret talks with the government.

Throughout this period he kept Oliver Tambo’s exile leadership of the ANC informed. But there were misgivings about his role. Mandela later went out of his way to allay these fears.

The example I recall most vividly (because I had to rush around closing secret offices and bank accounts) came six months after his release when the leadership of “Operation Vula” (the ANC and South African Communist Party’s underground network) were rounded up.

FW De Klerk, the last apartheid president, used the arrests to demand that the Communist Party leader Joe Slovo be dropped from the ANC’s negotiating team. But Mandela, who’d once been a party member, dug in. De Klerk backed down, and eventually indemnified the group.

The four years of negotiations saw more people killed in political violence – mostly from the state and its proxies, with an estimated 14,000 people dying. Mandela could not prevent this mayhem, but his authority and gravitas kept the negotiations to end apartheid afloat. Authority and momentum seeped from De Klerk into Mandela.

Still, he and his team had to make compromises. One was that the apartheid military were mollycoddled because of the danger they presented. Another was that the ANC had to allow Inkatha, the Zulu-nationalist party led by Mangosuthu Buthelezi, control of KwaZulu-Natal.

In the end, Mandela’s team got more than many expected – a one-person, one-vote election and a progressive constitution with no entrenched rights for racial minorities. Without Mandela none of this would have been certain, or even likely.

Mandela’s five years as president were more ambiguous. He helped keep the peace through gestures like appointing De Klerk and Buthelezi to his cabinet, wearing Springbok colours in presenting the rugby World Cup trophy to the victorious South African side in 1995 and securing the formation of the Truth and Reconciliation Commission.

There were real changes, including houses for the poor and water supplies for three million, with two million connected to the electricity grid. But job-creation programmes were abandoned and the gap between rich and poor remained even if the ranks of the rich became more racially mixed – and crime rates remained disturbingly high.

It is sometimes said that the corruption that engulfed the country started during Thabo Mbeki’s presidency (June 1999 to September 2008) and became endemic under Jacob Zuma (May 2009 to February 2018). But the seeds were sown earlier, and Mandela did little to curb its growth within the ANC while leader.

He also neglected the HIV/AIDS pandemic while president. When I discussed this with Edwin Cameron, the Constitutional Court judge and HIV/AIDS activist, in an interview published in South Africa’s Sunday Independent in 2001, he shook his head sadly.

Of all the leaders of the 20th century who might have had an impact, Mandela was the one who could have done the most – without doubt this was one of the grievous omissions of his presidency…
He did 199 things that contributed to our nation’s salvation but the one thing he didn’t do as president was take a lead on AIDS – and it’s not because he wasn’t begged to. We tried in every single way, but he didn’t take it up and it was a tragedy.

Mandela’s talent for reading the political runes was not always matched by his ability to read people. Internal political leaders who’d publicly criticised Winnie were sidelined but his patrician’s hope that he could have a benign influence on her evaporated. They separated in 1992 and divorced in 1995.

Mandela’s tendency to defer to the exile leadership came at a cost. He appointed several dud former exiles to his cabinet, including the dozy Alfred Nzo as foreign affairs minister and the corrupt Joe Modise as defence minister.

He also conceded to pressure from exile leaders to appoint Mbeki rather than Cyril Ramaphosa as deputy president, despite having earlier swapped them as negotiations head, regarding Mbeki as thin-skinned and inflexible, according to his official biographer, Anthony Sampson. Yet Mandela increasingly delegated power to his dauphin, who displayed the paranoia and obduracy he’d feared.

Mandela left at the right time in 1999, when the country still seemed in a healthy state, after which he consolidated his international reputation, while throwing himself into the HIV/AIDS campaign on learning that his son, Makgatho, was HIV-positive. He described it as a war that had killed more than “all previous wars”.

This 18th of July marks what would have been his 102nd birthday. His legacy is secure, the rough edges smoothed – a figure of reconciliation more than a guerrilla leader, a statesman, not a former communist, an icon solidified in sculptor’s stone rather than a magnificent, flawed and complex human being.