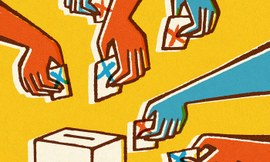 The Biggest Winner This Year: Democracy

In Michigan, it began with an MBA student’s Facebook post seeking a solution to gerrymandering shortly after Donald Trump’s election. In North Dakota, a coffee group of grandmas decided they’d had enough of corporate government rule.

They and others are now seeing their efforts pay off. Cities and states across the U.S. passed 15 anti-corruption measures Nov. 6 that were made possible by grassroots movements, according to RepresentUs, an activist organization that supports local efforts to improve voters’ and candidates’ access to the political system. The measures cover areas as diverse as automatic voter registration, anti-gerrymandering and the elimination of dark money in local elections. Those strides in fairness, activists say, will only beget more open democracy movements across the United States.

“For decades, voters have been getting more and more frustrated with the establishment status quo in politics and there’s been this overwhelming feeling of hopelessness,” says Joshua Graham Lynn, co-founder and managing director of RepresentUs.

“When voters realize their own power, it bodes well for more of the same in 2020,” he says.

Fifteen of 16 anti-corruption measures that were on the ballots passed Nov. 6, joining eight others approved earlier in 2018. Many of them will take effect before 2020, when Americans will not only vote for president and congressional leaders, but answer a census that will help determine new legislative district boundaries.

Katie Fahey, then a 27-year-old political rookie in Michigan, dreaded Thanksgiving after the 2016 election, knowing that emotions in her politically divided family would be raw. A couple of days after the election, she posted on Facebook that she wanted to address the gerrymandering that left the “purple” state with a heavy majority of Republicans in the state house, despite a roughly 50-50 division of votes between parties.

She indicated that anyone who wanted to help tackle the problem should let her know—she figured she’d find a group or movement to join, she says.

“I didn’t think it would lead to me running a ballot initiative in our state,” Fahey says.

The post attracted the attention of thousands of people, and soon she and a coalition called Voters Not Politicians had secured a ballot measure—Proposal 2—proposing an independent redistricting commission made up of regular Michiganders.

“We’re undoing some of that damage so we can have a fair, representative democracy.”

Michigan, where elected legislative officials had traditionally drawn the political boundaries, is known as one of the worst-gerrymandered states in America, according to Michigan’s Bridge Magazine. Fahey herself lives outside of Grand Rapids, an urban area that’s “cracked” into several separate districts, meaning its progressive population was split into more rural, conservative districts that don’t share much cultural or geographical commonalities with the city. It allows conservatives to secure more seats than what demographics might otherwise dictate. Take the Michigan House of Representatives: Though the total vote in 2016 favored Democrats by a half-percentage point, Republicans took 63 of the 110 seats.

To illustrate the situation, Fahey made a promotional video for Voters Not Politicians in which she ran across three legislative districts in the space of 46 seconds.

“If politicians draw their own lines, they target the people they’re scared of losing to,” she says. “Our incumbents will have to really be campaigning for the will of the people and can’t have that unfair advantage anymore.”

The measure’s victory, with 61 percent of the vote, will lead to the establishment of a citizen commission that will host hearings throughout the state and draw new district boundaries for the 2022 midterm election.

“The reality that really struck me throughout this process is that especially in a purple state … if the people didn’t actively choose to organize, this was never going to happen,” Fahey says. “A lot of people are sick and tired of politics as usual, and they’re ready for change.”

“What we’re doing now is we’re undoing some of that damage so we can have a fair, representative democracy,” she says.

“The more we move the needle, the more it becomes a mandate for our elected leaders.”

Other successful measures to that end include the initiative allowing former prisoners to vote in Florida; anti-gerrymandering victories in Colorado, Missouri, and Utah; and the establishment of publicly funded elections in Baltimore and Denver. North Dakota, propelled by a multipartisan group officially called North Dakotans for Public Integrity but self-dubbed the “Badass Grandmas,” passed a measure containing a full slate of anti-corruption reforms, such as requiring the reporting of large donations, banning the personal use of campaign money, restricting lobbyist gifts, and closing the “revolving door” of public officials leaving office to become lobbyists.

“Voters are completely fed up with what they see in politics,” says David Donnelly, president and CEO of Every Voice, which supports municipal efforts to create publicly funded elections. “[With] the pressure on elected officials to raise money, voters feel completely shut out and don’t think politicians are working for them.”

The past 10 years have seen a dismantling of election integrity, from the Supreme Court’s 2010 Citizens United decision to its 2013 gutting of the Voting Rights Act that facilitated voter suppression measures in Georgia and other states. Trump’s election despite Hillary Clinton’s capture of the popular vote demoralized voters further, organizers say.

“People are more awakened to the crisis,” Athilingam says. “A lot of people came after the 2016 election and started participating in democracy more than they ever have before. Once you start getting in tune with politics … you quickly realize that things are not fair.”

But recent years have seen a surge in anti-corruption progress initiated by voters themselves. They not only tend to increase voter participation, but can alter state legislatures and congressional boundaries and help elect more progressive candidates, says Rita Bosworth, executive director of the Sister District Project, which works to elect Democrats to disproportionately Republican state chambers.

“When there are more things on the ballot that are super important, that helps drive turnout,” which favors progressives, Bosworth says.

So where will these reforms hit next? It’s too early to tell for the most part, Athilingam says, because initiatives haven’t been certified for the next election.

But Albuquerque, New Mexico, and Austin, Texas, are poised to pass public campaign financing in their city halls, Donnelly says, inspired by a system passed in Seattle in 2015. And the expansive progressive flips in state chambers across the country, such as in Virginia in 2017 and New Hampshire this year, could make those state governments more amenable to passing reforms so that activists don’t need to take up the mantle, Athilingam says.

And election fairness appeals to people of all parties, Lynn of RepresentUs says.

“The power of the people in this case and the power of unity and cross-partisanship is going to continue to be what moves the needle [in election integrity],” he says. “The more we move the needle, the more it becomes a mandate for our elected leaders.”

Lynsi Burton wrote this article for YES! Magazine. Lynsi lives in Seattle and works as a reporter at the Seattle PI.