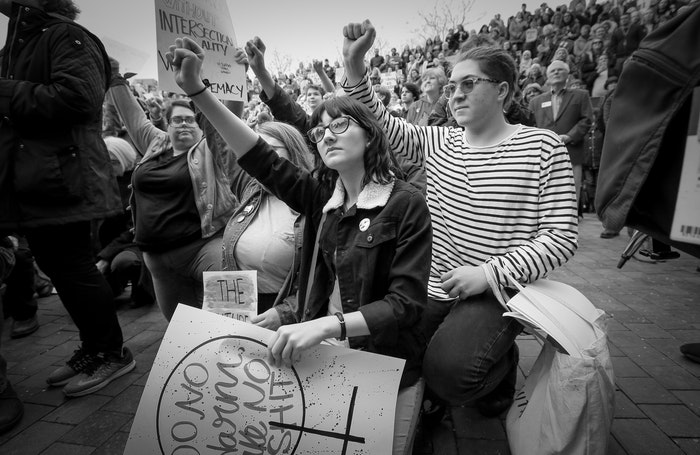 Why are white supremacists protesting to ‘reopen’ the US economy?

A series of protests, primarily in state capitals, are demanding the end of COVID-19 lockdown restrictions. Among the protesters are people who express concern about their jobs or the economy as a whole.

But there are also far-right conspiracy theorists, white supremacists like Proud Boys and citizens’ militia members at these protests. The exact number of each group that attends these protests is unknown, since police have not traditionally monitored these groups, but signs and symbols of far right groups have been seen at many of these protests across the country.

These protests risk spreading the virus and have disrupted traffic, potentially delaying ambulances. But as researchers of street gangs’ and far-right groups’ violence and recruitment, we believe these protests may become a way right-wingers expand the spread of anti-Semitic rhetoric and militant racism.

Proud Boys, and many other far-right activists, don’t typically focus their concern on whether stores and businesses are open. They’re usually more concerned about pro-white, pro-male rhetoric. They’re attending these rallies as part of their longstanding search for any opportunity to make extremist groups look mainstream – and because they are always looking for potential recruits to further their cause.

While not all far-right groups agree on everything, many of them now subscribe to the idea that Western government is corrupt and its demise needs to be accelerated through a race war.

For far-right groups, almost any interaction is an opportunity to connect with people with social or economic insecurities or their children. Even if some of the protesters have genuine concerns, they’re in protest lines near people looking to offer them targets to blame for society’s problems.

Once they’re standing side by side at a protest, members of far-right hate groups begin to share their ideas. That lures some people deeper into online groups and forums where they can be radicalized against immigrants, Jews or other stereotypical scapegoats.

It’s true that only a few will go to that extreme – but they represent potential sparks for future far-right violence.

President Donald Trump, a favorite of far-right activists, has tweeted encouragement to the protesters. Police responses have been uneven. Some protesters have been charged with violating emergency government orders against public gatherings.

Other events, however, have gone undisturbed by officials – similar to how far-right “free speech” rallies in 2018 often were treated gently by police.

Police have tended to be hesitant to deal with far-right groups at these protests. As a result, the risk is growing of right-wing militants spreading the coronavirus, either unintentionally at rallies or in intentional efforts: Federal authorities have warned that some right-wingers are talking about specifically sending infected people to target communities of color.

One thing police could do – which they often do when facing criminal groups – is to track the level of coordination between different protests. Identifying far-right activists who attend multiple events or travel across state borders to attend a rally may indicate that they are using these events as part of a connected public relations campaign.