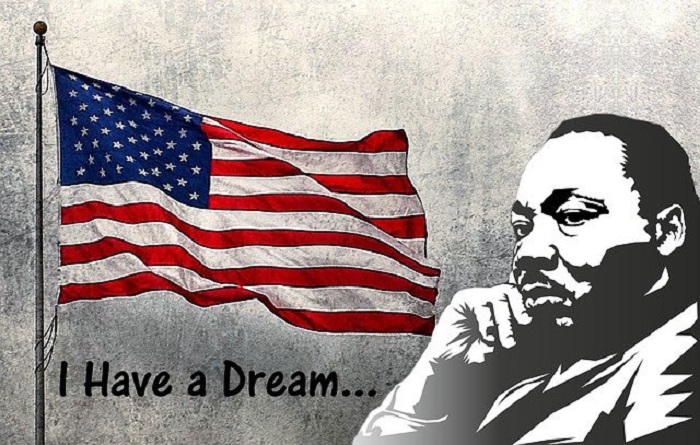 MLK Jr. Had A More Radical Message Than A Dream Of Racial Brotherhood

Martin Luther King Jr. has come to be revered as a hero who led a nonviolent struggle to reform and redeem the United States. His birthday is celebrated as a national holiday. Tributes are paid to him on his death anniversary each April, and his legacy is honored in multiple ways.

But from my perspective as a historian of religion and civil rights, the true radicalism of his thought remains underappreciated. The “civil saint” portrayed nowadays was, by the end of his life, a social and economic radical, who argued forcefully for the necessity of economic justice in the pursuit of racial equality.

Three particular works from 1957 to 1967 illustrate how King’s political thought evolved from a hopeful reformer to a radical critic.

For much of the 1950s, King believed that white southern ministers could provide moral leadership. He thought the white racists of the South could be countered by the ministers who took a stand for equality. At the time, his concern with economic justice was a secondary theme in his addresses and political advocacy.

Speaking at Vanderbilt University in 1957, he professed his belief that “there is in the white South more open-minded moderates than appears on the surface.” He urged them to lead the region through its necessary transition to equal treatment for black citizens. He reassured all that the aim of the movement was not to “defeat or humiliate the white man, but to win his friendship and understanding.”

King had hope for this vision. He had worked with white liberals such as Myles Horton, the leader of a center in Tennessee for training labor and civil rights organizers. King had developed friendships and crucial alliances with white supporters in other parts of the country as well. His vision was for the fulfillment of basic American ideals of liberty and equality.

By the early 1960s, at the peak of the civil rights movement, King’s views had evolved significantly. In early 1963, King came to Birmingham to lead a campaign for civil rights in a city known for its history of racial violence.

During the Birmingham campaign, in April 1963, he issued a masterful public letter explaining the motivations behind his crusade. It stands in striking contrast with his hopeful 1957 sermon.

His “Letter From a Birmingham Jail” responded to a newspaper advertisement from eight local clergymen urging King to allow the city government to enact gradual changes.

In a stark change from his earlier views, King devastatingly targeted white moderates willing to settle for “order” over justice. In an oppressive environment, the avoidance of conflict might appear to be “order,” but in fact supported the denial of basic citizenship rights, he noted.

“We merely bring to the surface the hidden tension that is already alive,” King wrote. He argued how oppressors never voluntarily gave up freedom to the oppressed – it always had to be demanded by “extremists for justice.”

He wrote how he was “gravely disappointed with the white moderate … who paternalistically believes he can set the timetable for another man’s freedom.” They were, he said, a greater enemy to racial justice than were members of the white supremacist groups such as the Ku Klux Klan and other white racist radicals.

By 1967, King’s philosophy emphasized economic justice as essential to equality. And he made clear connections between American violence abroad in Vietnam and American social inequality at home.

Exactly one year before his assassination in Memphis, King stood at one of the best-known pulpits in the nation, at Riverside Church in New York. There, he explained how he had come to connect the struggle for civil rights with the fight for economic justice and the early protests against the Vietnam War.

“Now it should be incandescently clear that no one who has any concern for the integrity and life of America today can ignore the present war. If America’s soul becomes totally poisoned, part of the autopsy must read ‘Vietnam.’ It can never be saved so long as it destroys the hopes of men the world over.”

He angered crucial allies. King and President Lyndon Johnson, for example, had been allies in achieving significant legislative victories in 1964 and 1965. Johnson’s “Great Society” launched a series of initiatives to address issues of poverty at home. But beginning in 1965, after the Johnson administration increased the number of U.S. troops deployed in Vietnam, King’s vision grew radical.

King continued with a searching analysis of what linked poverty and violence both at home and abroad. While he had spoken out before about the effects of colonialism, he now made the connection unmistakably clear. He said:

“I speak for those whose land is being laid waste, whose homes are being destroyed, whose culture is being subverted. I speak for the poor in America who are paying the double price of smashed hopes at home, and death and corruption in Vietnam.”

King concluded with the famous words on “the fierce urgency of now,” by which he emphasized the immediacy of the connection between economic injustice and racial inequality.

King’s “I Have a Dream,” speech at the March on Washington in August 1963 serves as the touchstone for the annual King holiday. But King’s dream ultimately evolved into a call for a fundamental redistribution of economic power and resources. It’s why he was in Memphis, supporting a strike by garbage workers, when he was assassinated in April 1968.

He remained, to the end, the prophet of nonviolent resistance. But these three key moments in King’s life show his evolution over a decade.

This remembering matters more than ever today. Many states are either passing or considering measures that would make it harder for many Americans to exercise their fundamental right to vote. It would roll back the huge gains in rates of political participation by racial minorities made possible by the Voting Rights Act of 1965. At the same time, there is a persistent wealth gap between blacks and whites.

Only sustained government attention can address these issues – the point King was stressing later in his life.

King’s philosophy stood not just for “opportunity,” but for positive measures toward economic equality and political power. Ignoring this understanding betrays the “dream” that is ritually invoked each year.