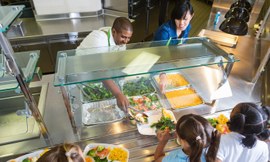 What School Lunches Have to Do With Fixing Wealth Inequality

Once a year, Russell Farms in Brackney, Pennsylvania, hosts a harvest celebration, where students from nearby Tioga Central School District in New York state get to visit, talk to farmers and pick apples from the farm’s 12  varieties.

“It’s a great day because the kids can make the connection and see where their food is grown,” says Julie Raway, a registered dietitian for 15 New York school districts. And they are excited when the same fruit they sampled shows up in their cafeteria at school.

Russell Farms sells apples to local school districts as part of a Farm to School initiative—a growing national movement that aims to create equity and redistribute wealth in the food system by reinvesting part of it in small, regional farms.

Anupama Joshi, co-founder of the North Carolina-based Farm to School Network, believes that if we are going to fix the food system in this country, we need to start with our schools.

As executive director of the network, Joshi has been rethinking the way we bring food into school lunchrooms and about how we feed students. Her collaboration with a broad cohort of organizations nationwide, including the districts that Raway works with in New York, serve not only to connect school children with local farms while creating jobs in the community, but also to keep local dollars local through things like on-campus gardens and farm-fresh meals.

“Part of fixing the broken system is changing the culture of food in our communities,” Joshi says.

Farm-to-institution organizations such as Farm to School are pursuing local, state and national policies that exploit the enormous buying power of institutions such as hospitals and schools to help redistribute some of the wealth concentrated in large, private food companies.

The hope is that this redistribution will create equity for farms owned by women and people of color, and provide more nourishing food choices in communities that historically have had limited options.

“With regional and local procurement, our core values are around small and medium farms, even though we realize that all kinds of agriculture have a place in our food system,” Joshi says.

The idea isn’t to do away with large farms entirely, but to shift demand so that small and medium farms have an equal role in feeding local institutions. Raway says, “We serve about 20,000 lunches a day across the districts I work with, and when we work with local farms we’re stimulating the local economy.”

If you want to understand how we got the food system that we have, you have to go back to the founding of this country.

On the surface it seems simple enough: Just connect local farms with schools, universities and hospitals, right? But procurement and distribution of farm goods is a complex system with layers of policy, funding and information—and reams of red tape.

“There’s a lot of underground scaffolding that keeps our food systems the way that they are,” says Beth Hopping, co-founder of Food Insight Group, an organization based in North Carolina that uses research to create community-based solutions to problems in the food systems.

It helps small- and medium-sized farms navigate some of that scaffolding. For farms to begin distributing to local institutions, for example, they have to be inspected by government agencies, develop a distribution system that is efficient and timely, and their produce has to be properly cleaned, stored and served at the institution according to government guidelines. All of this can be a strain on small- to medium-sized farms that don’t have the capital or labor to get it all done.

Hopping and her co-founder, Linden Thayer, are looking for ways to simplify this by identifying communities’ needs up front as a starting point. “We’re trying to rebuild our food system in a way that works for communities,” Hopping says.

If you want to understand how we got the food system that we have, you have to go back to the founding of this country, says Eric Holt-Gimenez, author of A Foodie’s Guide to Capitalism. “In the U.S., people displaced by capitalism in Europe came over, slaves were brought over to start plantations, and indigenous people were removed from their lands,” he says. “That created an extraordinary amount of stolen wealth on which to create a capitalist system.”

The evolution of food production was a key part of the Industrial Revolution, which needed cheap labor and cheap food to fuel the labor pool. Large contracts were given to companies that could provide the most food at the lowest cost.

One of the biggest benefits of farm to institution policies is that they have been proven to keep wealth in the region.

This system still prevails today, with institutions such as schools and hospitals buying large quantities of their supplies giant companies like Smithfield Foods, the largest pork producer in the world. Combined, school districts nationwide spend an estimated $3 billion on food contracts, most of it with large farms.

“The wealth in the food system is concentrated in the hands of a few and has been extracted at the expense of the earth and people,” Hopping says. Organizations such as Farm to School Network and Wholesome Wave, a nationwide program that connects farms with hospitals, are looking for ways to make food systems more equitable.

Ultimately the goal is to get all the stakeholders to the table, which is no easy feat since our current food system has so many moving parts. “We’re working to address the farm side and the school side of the equation,” Joshi says. “We think about protecting the product, getting it to the schools, land distribution for small farms, looking at the lack of kitchen operations in schools, training personnel and creating experiential ways for children to engage with food.”

One way organizations are addressing some of these issues is by creating regional farm-to-institution “hubs,” where farm produce, meat and dairy are delivered to be cleaned and processed by trained personnel before being distributed to schools, hospitals, and universities.

“The general idea is this way we can increase the number of skilled employees in our communities,” Thayer says. “Those hubs could even feed shelters, run food programs or provide space for food entrepreneurs who can’t afford space.”

Raway and her New York colleagues are considering purchasing a food truck that can be used to pick up local produce from farms, prep it and deliver it to local schools. “A food truck would really help us facilitate distribution, which is a big challenge,” Raway says.

And they are getting help in other ways, too. New York Gov. Andrew Cuomo has announced that $1.5 million of the state’s annual budget will be allocated to expand farm-to-school programs statewide. It’s a very positive sign, Raway says. “There’s a lot of money on the table for school’s to go local so hopefully a lot more do.”

One of the biggest benefits of farm-to-institution policies is that they have been proven to keep wealth in the region. For the past two years, for example, Farm to School has studied the small farmers they work with. One study in Georgia found that for every dollar the program spent, $2 stayed in the state, instead of leaving to be invested in a large food company. “Farm-to-institution generates more economic activity and we know that anecdotally now,” Joshi says.

The U.S. Farm Bill, a $90 billion piece of legislation that sets policies for the nation’s agricultural industry, is now awaiting a vote from the Senate. It includes two provisions that will make it easier for schools to work with local farms and buy their food locally.

“It’s a start,” Holt-Gimenez says. But, he says, moving away from privatization has to be the goal to create true equity because it discourages the pooling of wealth into a few companies. “One of the reasons we have so little power is that everything has been privatized,” he explains. He points to community sustained agriculture or C.S.A.’s as a great example of how communities can deprivatize their food system.

And it can’t just be about food, he says. “We also have to realize that these policies will be dead policies if we don’t have social power, like equity in race and gender built into them.”