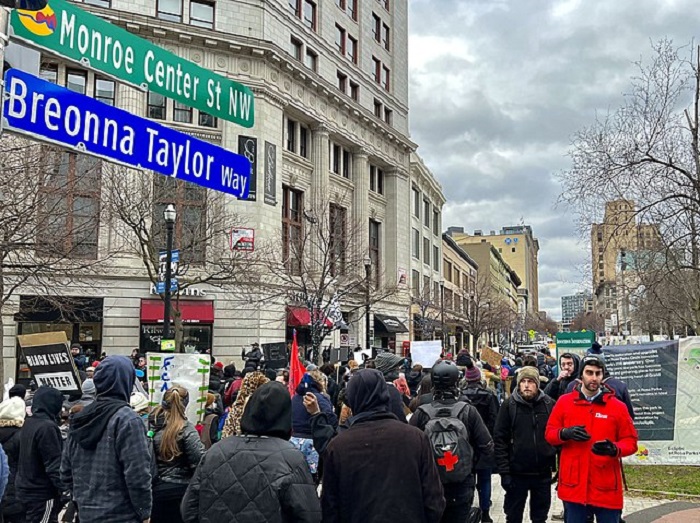 The police killing of 26-year-old Congolese refugee Patrick Lyoya in Michigan has many of us swirling in the fear, grief, and confusion that accompany such a tragedy. In this case, confusion also played a key role in Lyoya’s killing. When Lyoya was pulled over by police, he stepped out of his car. When the officer demanded that he to return to the car, he asked, “Why?” A tussle ensued until the officer shot Lyoya in the back of the head.

Lyoya was a refugee, a father of two, had no police record, and was unarmed. His confusion about what to do when pulled over by the police should not have cost him his life.

It’s true: Stressful situations can lead to confusion among all parties involved. But not all forms of confusion have equal consequences. In some cases, confusion can result in death. So how can we mitigate confusion when we don’t all see eye to eye—when we’re bringing different histories, cultures, languages, and even neurodivergences into high-stress scenarios like police interactions?

When Confusion Put My Cousin in Danger

A 2016 study reports that up to half of those killed by law enforcement officers are disabled. Also consider that 10% of all calls to police involve someone suffering a mental health crisis, and that 1 in 4 police shootings involve individuals struggling with mental illness. These statistics became all too real for my own family.

In 2019, in Queens, New York, a home health aide called the police when my autistic cousin tried to position his mother’s feet in a certain way. His mother, also my cousin, assured the aide that her son posed no threat—the act of making sure his mother’s feet were “just right” was a way to bring him comfort while the new health aide visited them.

Yet 10 police officers arrived—some carrying riot shields— to help protect a mother who perceived no threat from her own son. My cousin, an 18-year-old Black man, mostly nonverbal, and with the intellect of a small child, was confused when the police barged into his house.

In his fear, he resisted their approach before they handcuffed him and placed him in the back of an ambulance, where he was cuffed to the rail of the gurney and strapped with ties. The police escalated an autistic man’s need to find comfort in his own home, forcibly restrained him, and removed him from his mother and his residence.

If we accept that “neurodivergent” is a label used to describe someone who processes information in a unique or atypical way, we must also accept that two parties processing information in different ways can open the door to misunderstandings and confusion. But when armed police are involved, that confusion can quickly turn violent. Why do we continue to let police-related confusion harm some of the most vulnerable members of society?

On a gray autumn afternoon in Queens, my cousin asked a health aide not to call 911. But the aide believed she was doing the right thing, perhaps because she believed there were no other options.

But some cities are exploring non-police options and testing ways to divert mental health crises away from 911 calls. In Denver, Colorado, city authorities are dispatching mental health teams, instead of armed police officers, to certain 911 emergency calls.

When Cultural Differences Cause Confusion

Yet neurodivergence contributes to only some part of the confusion during police interactions.

I grew up in the bilingual city of Montreal, Canada. In an increasingly diverse landscape, Canadian law enforcement offices are unprepared to navigate crisis situations involving other languages beyond English and French. In 2020, when Ejaz Choudry was experiencing a mental health crisis on the outskirts of Toronto, police continued to speak with him in English, despite the fact that a Punjabi interpreter was on-site. The confusion escalated until the police shot and killed the 62-year-old man.

Similarly, in 2021, Los Angeles police shot Gerardo Martinez, a man who only spoke an Indigenous language, Zapotec, and did not understand the orders given to him in Spanish.

When Lyoya was pulled over, he stepped out of the car. Given that he was born and raised in the Democratic Republic of Congo, such a response might have been perfectly reasonable from his perspective. I can imagine his thought process: “You are pulling me over because you want to talk to me, so I will come and talk to you.” The cultural differences between Lyoya and the police might well have contributed to the confusion in a stressful situation. Imagine not understanding what is being asked of you or why it’s being asked.

As communities become increasingly multicultural, we might consider how our police departments stack up against comparable countries. “We have the shortest [police] training in comparison to any democratic country,” said Maria “Maki” Haberfeld, speaking to ABC News. Haberfeld, who is a professor of police science at John Jay College of Criminal Justice in New York, compared U.S. law enforcement to some Scandinavian countries that require recruits to attend a four-year police university. In contrast, the average police academy class in the U.S. is only 21 weeks. Additionally, according to a 2015 survey conducted by the Police Executive Research Forum, U.S. recruits are given 58 hours of firearm training and 49 hours of defensive tactical training, but only about eight hours of training in crisis intervention and de-escalation.

In a recent phone call, my cousin and I discussed Lyoya’s death. She said, “It’s tiring. With each headline, with the announcement of that police have killed another Black person, I think—am I the only one prepared to protect my son?”

I’d like to think that with the right solutions in place, a mother’s love isn’t the only thing that can protect us from confusion.

There Are Solutions to Fatal Police Violence

I live in Austin, Texas, where, in 2019, we had the country’s highest rate of police shootings for mental health calls. In 2020, following sweeping calls for justice in the wake of George Floyd’s death, the Austin City Council unanimously voted to cut the police budget by about $150 million, and declared that they were committed to reimagining public safety.

The idea was that by spending money on treating addiction, mental illness, and homelessness, they hoped to curb crime and give police less to do. When the state government overturned the cut, City Manager Spencer Cronk remained undeterred. “[Our] plan has never been just about resources. This plan has always been about how do we think differently about providing public safety to our community?” Now, Cronk is spending the money differently—with a focus on “leveraging City resources, beyond the scope of law enforcement, to design community centered interventions to reduce harm and address the root cause of systemic inequities which often lead to crime.”

Meanwhile in Denver, Colorado, the Support Team Assisted Response (STAR), which started in 2020, has responded to over 2,200 low-risk calls reporting trespassing, intoxication, or mental health crises involving poverty, homelessness, or addiction. According to a report, no member of a STAR team has called for backup because of a safety issue. In other words, no one was hurt or killed in these interactions. Other cities in Colorado are expected to expand this pilot program.

Another straightforward idea to reduce the violence that can arise from confusion is training that involves role-playing. Indeed, police forces across the country are using role-playing to build empathy and help officers imagine scenarios without the option of firing a gun.

Research shows that while certain officers are more inclined to draw their weapon, confidence and the ability to read a situation play key roles in the decision to use force. Role-playing, and the ability to work through a scenario over and over again, builds the confidence that every officer needs to protect themselves, and those they’ve sworn to protect. This training can come in many forms: virtual-reality headsets, recorded scenarios where instructors can change how those on screen respond to the trainees’ actions, or live-action role-playing.

In 2020, in Newark, New Jersey, where volunteers assist in scenario-based instruction, officers did not fire a single on-duty shot.

These small-scale reforms ought not to be controversial or cutting-edge, but instead part of the mandatory changes we need to ensure that confusion is eliminated, and that vulnerable people aren’t needlessly killed simply because of communication problems. If police departments and city councils are not willing to implement solutions on a large scale, then we will see more senseless deaths like that of Lyoya.