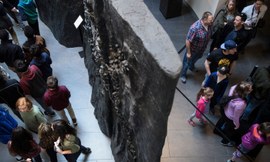 For decades, Tom Houck has taken people to landmarks of the civil rights movement—places where organizers strategized, demonstrators protested, and where both tragedy and triumph transpired. But it wasn’t until 2015 that the friend and aide to the late Martin Luther King Jr. established an official civil rights tour in his hometown of Atlanta.

Houck estimates that close to 20,000 people have taken his three-hour bus tour since the inception of Civil Rights Tours Atlanta, with about 40 percent of participants coming from out of town. He hosts weekly public and private tours of key civil rights sites like the Martin Luther King Jr. National Historical Park, driving the same routes he traversed as a young chauffeur for the King family. It’s been 50 years since his friend and mentor was assassinated, but Houck still remembers the many good moments they shared.

In the first year of his presidency, Trump and his administration took nearly 100 actions that undermined the progress made on civil rights.

He also remembers the bad. Today, Houck sees several parallels between what happened at the height of the civil rights movement and the national political mood since Donald Trump came onto the scene.

“Our political landscape is a throwback to the ’60s—with what’s going on with taking back voting rights and the kind of rhetoric we’re hearing from him,” he said. “It sounds a lot like the rhetoric we heard from George Wallace.”

In the first year of his presidency, Trump and his administration took nearly 100 actions that undermined the progress made on civil rights according to a report published by the Leadership Conference on Civil and Human Rights. But as civil rights come under increasing attack, tourism centered around the struggle is growing.

Several new museums and memorials related to the fight for civil rights have sprung up across the nation in recent years. In 2014, the National Center for Civil and Human Rights opened in Atlanta. The next year saw the launch of America’s Disability Rights Museum on Wheels, a traveling exhibition. The Smithsonian opened its National Museum of African American History and Culture in 2016. In 2017, the Mississippi Civil Rights Museum opened in Jackson, and a walking tour about the history of the 1969 Stonewall Riots in New York City and the fight for LGBTQ rights was launched. Then in April 2018, the Equal Justice Initiative opened the Legacy Museum: From Enslavement to Mass Incarceration and the National Memorial for Peace and Justice in Montgomery, Alabama.

The National Trust for Historic Preservation established its African American Cultural Heritage Action Fund in November 2017 in response to the violent Charlottesville rally that left one woman dead and dozens injured. The new fund is a multiyear initiative to preserve narratives and locations central to African American history and activism amid a proliferating social crisis, said the fund’s director, Brent Leggs.

“The civil rights heritage tourism economy is growing,” Leggs said. “And the Action Fund and other programs are helping to promote these stories and places that are attracting visitors not only from the U.S. but from around the world.”

In January 2018, a group that includes former National Park Service director Jonathan Jarvis and other civil rights historians launched the U.S. Civil Rights Trail to preserve remaining landmarks of the era. The trail covers 14 states in the South and ranges as far west as Kansas and north to Delaware. Among the sites to see are places related to the life of King, desegregation efforts, voter suppression, the Brown v. Board of Education Supreme Court case, Freedom Rides, and memorials for victims of racially motivated violence.

A 2017 study published by the International Journal of Heritage Studies on “historical empathy”—or one’s ability to connect cognitively and emotionally with people who lived in the past and with their lived experiences—showed that students who did not otherwise feel attached to World War II demonstrated emotional engagement with personal stories and artifacts from the war in a museum setting.

After traveling to the National Voting Rights Museum in 2016 for the 51st anniversary of the 1965 Bloody Sunday march from Selma to Montgomery, Alabama, Kayelin Tiggs said she felt compelled to engage with civil rights history even more so than she had previously.

“I was just completely in awe,” Tiggs said. “John Lewis remembers everything, and so he was able to tell the story in such detail, with such passion.”

Hearing firsthand accounts from U.S. Rep. John Lewis, the former chairman of the Student Nonviolent Coordinating Committee, and retracing the path activists once marched across the Edmund Pettus Bridge in Selma provided an experience she doesn’t think she would have gotten otherwise.

“I walked away feeling more educated, more appreciative, and inspired to teach other people about this history,” Tiggs said.

Robert Patterson, chair of Georgetown University’s Department of African American Studies, said many students who have traveled to see civil rights exhibits have told him how much their visits have moved them. It’s hard to tell, however, which spikes in his students’ collective consciousness can be attributed directly to civil rights tourism as compared to a generally heightened desire to be a more informed citizen in the current political environment.

Patterson’s undergraduate courses often fill in the gaps for students who previously only had superficial knowledge about civil rights history. He said primary and secondary school curricula lack comprehensiveness and nuance.

“There’s this fallacy that the legal achievements created some kind of quick fix,” he said. “But once you start tracing back the data, that shows there wasn’t that much movement [as a result]. There’s this paradox where time seems to be moving quickly on the one hand, but the progress is not in step with the time.”

Tiggs, who attended Wright State University in Dayton, Ohio, said she only realized how much she didn’t learn about the civil rights movement as a child after she enrolled in undergraduate African American studies and history courses.

It wasn’t until 2006 that the state of Mississippi passed the first law of its kind, to make a civil rights curriculum mandatory in public schools. Teachers and other education advocates were concerned about the ignorance students demonstrated of the stories of the Freedom Summer of 1964 and the lynching of Emmett Till—the investigation into which was reopened by the FBI in July 2018.

Despite making legislative strides toward implementing better civil rights curricula in its schools, a 2014 report published by the Southern Poverty Law Center gave Mississippi a C in a national assessment of civil rights education. Ohio, the state in which Tiggs grew up, received a D. Only South Carolina, Louisiana, and Georgia received As. Forty percent of U.S. states received Fs.

“Out on the streets they would spit at you—it was a vile, evil kind of thing.”

Back in Atlanta, Houck frequently comes face-to-face with this reality. “I’m aghast at how few schools really have a civil rights curriculum, and we need more of that,” he said. “Other than Martin Luther King Jr., they’ve never heard of a John Lewis or a Julian Bond. Some of them have never even heard of Rosa Parks.”

For this reason, he is more than just a friendly tour guide—he’s an educator with firsthand knowledge to impart.

Houck, who is White, worked alongside King on the Poor People’s Campaign, the Southern Christian Leadership Conference, and the Chicago Freedom Movement to demand racial and economic justice, an end to the Vietnam War, the overturning of Jim Crow laws, and to register Black voters.

Houck was met with rage from other Whites who saw him as a race traitor. “They would beat me up and harass me in jail,” he said. “And out on the streets they would spit at you—it was a vile, evil kind of thing. If you saw what happened in Charlottesville last year, this was 10 times worse.”

Groups ranging from family reunions to corporate teams such as Starbucks’ have taken Houck’s tour, visiting both extant civil rights landmarks and sites that are gone or have been converted to other uses.

Among the many locations on the route are the home where King was born, Ebenezer Baptist Church where King preached, and South-View Cemetery—the final resting place of prominent civil rights figures like Julian Bond, co-founder of the Student Nonviolent Coordinating Committee and former president of the Southern Poverty Law Center. Several of King’s family members, including his parents and younger brother, Alfred, are also buried at South-View, while King himself rests at the Martin Luther King Jr. National Historical Park, another destination of the tour.

It’s all part of Houck’s mission to educate his visitors so that the past won’t be forgotten. That includes both the difficult times and the lighter moments, such as the time he took King to church for his last birthday party.

“This is really recent history we’re talking about,” he said. “I talk about the human side of the movement and try to engage them in understanding that even though there was a struggle, there were good times and a lot of camaraderie, too.”