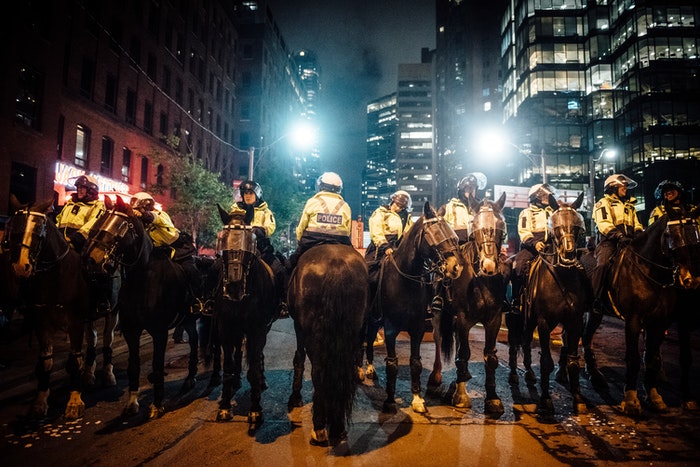 #DefundPolice What Can Do For Public Safety

Cities imagine taking away resources from racist, oppressive policing and putting it toward public safety and social services.

In the wake of the police killing of George Floyd in Minneapolis, the nation is no closer to eradicating the violence Black people have experienced at the hands of the police. National efforts to track use of force by police officers have come up short.

But something has changed.

Floyd’s death strengthened the Black Lives Matter (BLM) movement, founded in 2013 after a jury acquitted George Zimmerman, a neighborhood watchman, for killing Trayvon Martin. The cofounders of BLM had grown tired of seeing Black people killed with impunity. Now, protesters across the country, and across the world, have taken up their message. They’re calling for a divestment from policing and an investment in programs and social services in Black and other marginalized communities that could reduce the need for the police.

They’re calling for a new system of public safety.

If Black lives really matter, they argue, leadership of the country would not take these deaths lightly. Instead, elected officials on every level would move swiftly, outfitting the nation’s top experts with the resources needed to ensure no more Black lives are unjustly taken.

To be sure, making that vision a reality won’t be easy.

There is a major tension at the heart of the push to defund the police, says John Rappaport, a University of Chicago law professor. During a conference call to discuss the recent protests, Rappaport says, many of his law students supported the protesters’ demands to recast policing in the United States. Reform doesn’t work, they argued, because of resistance from police unions and because politicians lack the political will to see the changes through.

Rappaport says a professor on the call asked the students to take a step back, and offered a pointed question: “If you think the problem with reform is that we lack political will to make meaningful reforms, to make them stick and to enforce them, how the hell are we going to have the political will to remake our entire society?”

One of the biggest misconceptions people have about abolitionists, Ervin says, is that they want to dismantle the police and leave nothing in its place.

Phillip Atiba Goff, who leads the Center for Policing Equity in New York, knows first hand how difficult it is to revamp police departments. Goff has spent years training police departments to reduce racial disparities in police violence. More than political will, Goff says, it is going to require abandoning the “criminal lack of imagination” that has led to the killing of countless unarmed Black people by the police.

In 2008, campaign officials tapped Goff to write a memo on policing for then-presidential candidate Barack Obama. Goff, a psychologist, had spent years studying racism and policing. He urged the president to center policing in his first term, noting that every 30 years a singular act of police violence roiled the nation sending protesters spilling out into the streets. In 2015, he served on Obama’s policing task force focused on the future of community policing.

By Goff’s calculations, the nation was overdue for another incident. To bolster his theory, Goff did a deep search for nationwide statistics on racial disparities in instances of police brutality. But he came up empty-handed. The data simply did not exist.

In 2014, during Obama’s second term, officer Darren Wilson killed Michael Brown in Ferguson, Missouri. An uprising ensued, followed by promises of police reform. But the killings continued unabated: Tamir Rice in 2014; Freddie Gray in 2015; Alton Sterling; and Philando Castile in 2016. Every year, the list of names grows.

For Goff, the realization that no one was keeping track of police use-of-force incidents was part of the impetus for creating the Center for Policing Equity, which uses police departments’ own data to help them understand and eliminate the displays of force that have eroded trust between the departments and communites they serve. To date, Goff has worked with hundreds of departments nationwide. His work has a measurable impact: Use of force has decreased by an average of 25% among departments he’s trained.

But better data won’t be a silver bullet, he says. For any reforms to be successful, Goff explains, the departments must first contend with their violent histories and the pain they’ve caused. Many departments got their start hunting down Black people who had escaped enslavement. Decades later, he adds, police enforced the segregation of entire cities and beat Black people for attempting to exercise their civil rights.

“What we have been seeing on the streets of the United States is not just a reaction to policing: It’s the past due notice of the unpaid debts owed to Black people for four centuries,” Goff says. “When the laws of this nation were explicitly racist, it was law enforcement’s job to enforce racist laws. If there is no accounting for that past, we are probably going to fail this time too.”

Last year, the FBI launched a project to track instances of police use of force, but only a fraction of the approximately 15,000 police departments across the country submitted data. Most often, it’s the small departments without many incidents that share their numbers, says Bruce Taylor, an expert on violence prevention at the non-partisan and objective research organization NORC at the University of Chicago.

To explain why data is key, Taylor likens police killings to car crash fatalities. Because these deaths were treated as a serious public health issue, a task force was created to study and reduce the death toll. That task force, which became the National Highway Traffic Safety Administration in 1970, aggregated car crash deaths to identify the factors that put drivers most at risk of a fatal accident and crafted public safety campaigns, influenced state and federal legislation. The task force lobbied for increased safety innovations by the auto industry. As a result, deaths from crashes are dramatically lower today.

The same approach could prove useful for reining in police killings, according to Taylor.

Tracking this information wouldn’t be a heavy lift, Taylor says. The CDC already compiles information on every death in the United States. They could add a check box indicating when the death is caused by a police officer, he points out. The FBI also tracks homicides using data submitted by police departments. They could require police departments to note when the police are doing the killing.

Without the data, Taylor explains, departments can’t even begin to solve these complex problems. “Changing police behavior is a very difficult thing, even when you have all the data, but when you have one hand tied behind your back trying to do it, it’s going to be tough to be successful,” he adds.

To create true public safety, we must contend with the idea that oppression is at the root of all forms of harm, says Woods Ervin, an organizer with Critical Resistance, a community organization based in Oakland, California, working to eliminate the need for police and prisons. One of the biggest misconceptions people have about abolitionists, Ervin says, is that they want to dismantle the police and leave nothing in its place.

But in reality, Ervin explains, “Abolition is about building resources and practices to address those harms,” adding that noted scholar and abolitionist Ruth Wilson Gilmore has offered a useful framing: “Abolition is a presence.”

“Abolition is a presence, not an absence.

If city council members want to reallocate police funding to social service programs, they’ll likely have to deal with the blowback from police unions. Police unions have proven to be staunch and politically savvy opponents to police reforms for greater oversight. They’ve historically resisted diversifying the police force, lobbied against policies that would increase public accountability, and campaigned against candidates they say are soft on crime, says Rappaport, in Chicago, who is also an expert on police unions.

One of the biggest barriers erected by police unions is their collective bargaining agreements, he explains. Most cities are locked into agreements for three to five years. In addition to setting pay and pensions, these agreements often stipulate the number of police employed by the city each year. Shrinking the force would be a breach of contract, requiring the city to pay damages and likely kicking off an expensive legal battle.

There are legislative hurdles too.

Roughly 15 states have passed legislation outlining a “bill of rights” for police officers. The standard bill provides due process protections for officers, designating, for example, when and how they can be questioned following an incident of alleged misconduct. Even if a city terminated its collective bargaining contract with a police department, these statutes remain.

Barriers aside, local elected officials are often hesitant to criticize the police and defy the unions, Rappaport says. Past calls for increased oversight have often been met with disapproval by police officers. For example, in June when prosecutors in Atlanta charged two officers for killing Rayshard Brooks, nearly 200 of the city’s police officers called in “sick,” a tactic known as the “Blue Flu.”

Though police attitudes may be entrenched, public opinion on police violence is changing.

After the killing of Brown in Ferguson, only 43% of Americans said his death signaled a widespread issue with law enforcement, according to a Washington Post-Schar School poll. Now, nearly six years later, 69% of Americans say Floyd’s killing is indicative of a broader policing problem.

Some cities are already starting to rethink their relationship with the police.

A veto-proof majority of city council members in Minneapolis pledged to dismantle the city’s police department and replace it with a community-based system of public safety. School boards in several cities have severed their contracts with the police. And mayors in Los Angeles and New York City have vowed to reduce funding to their police departments.

Camden, New Jersey, has provided a complicated case study of what happens when cities disband their police departments. To root out corruption, the city dissolved the department in 2012. Officials created a new, smaller department comprised of officers who had undergone improved training and psychological evaluations. Crime declined and the relationship between police and residents improved.

Though Camden is hailed by some as a model of community-oriented policing, others say the praise is unwarranted, arguing that crime declined as a result of gentrification and that the city replaced its aggressive force with a vast system of surveillance.

Attempts to recast policing will be waged on many fronts, says Goff, who leads the Center for Policing Equity. “It’s going to take public health systems; it’s going to require new technology and better data capture.”

But most of all, Goff adds, “We are going to have to imagine a world that hasn’t existed yet: One that affords Black people the full dignity of humanity in the country in which they reside.”