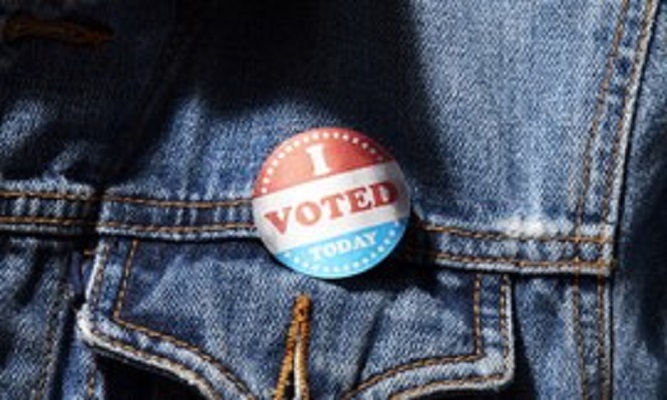 Not voting can have dire consequences; the collateral damage is all around us.

About 60% of eligible U.S. voters cast ballots in 2016, a crucial presidential election year in which fewer than 80,000 votes across three states helped tilt the country on its current, dramatic path.

Now, with the civil liberties of so many people and entire communities at stake, having your voice heard and your vote counted is more important than ever.

And while concerns over voter suppression and gerrymandering loom large for upcoming elections, particularly in states headed by conservatives, a number of grassroots and state-level groups work to empower people—from reinstating the voting rights of people with felony convictions to giving people more time off to vote. For example, the New York State Legislature this year passed 50 election law-related measures, 26 of which have been already been signed by the governor.

Here are five ways voters across the country are being enfranchised.

Some 20 states now require registered voters to have a photo ID to vote; 14 more require some other form of identification. But nationwide, as many as 21 million eligible voters, 11 percent of U.S. citizens, don’t have an ID card to vote in their state.

Spread the Vote helps voters get the identification they need—not just to vote but in other areas of their lives. With chapters in 10 states, it has helped 4,000 people obtain IDs since it was formed two years ago. Its founder Kat Calvin says the goal is to get identification for 10,000 by November 2020.

“We’ve learned that the work of getting IDs is crucial for life and voting, and that we have to focus on every single microbarrier that keeps people away from the polls, from a lack of ID to civic education, a ride to the polls, or not being able to take time from work,” Calvin says. “We have to help people overcome all of the challenges placed in front of them that make voting so difficult.”

A coalition of Latino civil engagement groups across Florida sued the state in 2018, claiming that 32 counties with significant Puerto Rican populations provided voters with ballots and other election materials only in English in violation of the Voting Rights Act. Their lawsuit focused on a part of the VRA aimed at protecting voters educated in schools where the predominant language was not English. They pointed to an increase in the number of Puerto Ricans moving to Florida after Hurricane Maria and said some 30,000 now living in the those counties were not proficient in English.

In May 2019, a federal judge ordered all 32 counties to provide Spanish-language materials and other assistance to Spanish-speaking voters in the March 2020 presidential primary election.

Of course, this requirement isn’t unique to Florida. The Voting Rights Act requires that ballot information, instructions, and voting support should be provided in other languages in jurisdictions with more than 10,000 or 5 percent of voting age citizens who speak that same language. It recognizes Asian American, Latino, American Indian and Alaska Native populations. An estimated 263 counties, cities and other jurisdictions in 29 states, including the entire states of California, Texas and Florida, are subject to the language requirement, based on population determinations that were made in 2016.

An estimated 6 million U.S. citizens are unable to vote because of laws that temporarily or permanently block people convicted of felonies from that basic right, according to the Sentencing Project. Most are people of color who live in states that prohibit those on probation, parole, or even those who have completed their sentences from voting.

Over the last two decades, organizations like the Sentencing Project have been working to dismantle such laws. Whether through legislative reform, executive action or ballot initiative, since 1997, 24 states have reformed their disenfranchisement policies and restored the voting rights of as many as 2.8 million people, according to the Sentencing Project.

That estimate doesn’t include 77,000 Nevadans whose voting rights were restored this year after the legislature there passed a measure that benefits those with felony convictions who are on probation or parole. “That’s a big deal because Nevada used to permanently disenfranchise most people with felony convictions,” says Morgan McLeod, a spokeswoman for the Sentencing Project.

And in perhaps one of the most publicized changes, Floridians in 2018 voted to lift a century-old lifetime voting ban for those with felony convictions, restoring voting rights to about 1.4 million people. But the Republican-led Florida Legislature then passed and Gov. Ron DeSantis signed a bill this year undermining Amendment 4 and preventing hundreds of thousands of newly reenfranchised voters from voting in Florida. Several groups, including the ACLU, are challenging it.

With security an obvious and growing election concern, the jury is out on online voting, and Americans are apparently just fine with that. Fewer than 40 percent of voters say they would choose to vote from their desktop or mobile devices if possible. No surprise that the bulk of those favoring online voting were under 30.

Still, the internet is making voting more convenient for citizens in other ways. In Pennsylvania, for example, eligible voters who can’t make it to the polls for the Nov. 5 election, can now apply online for absentee ballots using that state’s new mobile-friendly, online application site called votesPA.com/ApplyAbsentee. Ballots will still be mailed to voters, who must mail them back or deliver them in person, but the small change takes days off the process.

Other states also allow certain voters to request and submit absentee ballots electronically, mostly those serving in the military or living overseas, who fall under the federal Uniformed and Overseas Citizens Absentee Voting Act. There are exceptions in some state for voters with disabilities.

Further, 19 states and Washington, D.C., allow overseas  voters to return ballots via email or fax; seven others allow them to be faxed back. One, West Virginia, offers a mobile voting application solely to overseas voting act voters. And the city of Denver and Utah County in Utah piloted a mobile app this year for military or overseas voters.

5. Voting from your kitchen table

In at least 22 states, voters are able to participate in elections conducted by mail. Ballots are mailed out well in advance, giving voters an election period rather than just a day.

But while most of them permit all-mail elections only in certain circumstances, three states—Oregon, Washington, and Colorado—hold all elections entirely by mail, allowing citizens there to skip the trip to polling stations. Coloradoans also may vote in person on Election Day.

Oregon’s two U.S. senators want to adopt that vote-by-mail system for all the United States to help democratize the election process, and each year since 2010 have introduced a bill proposing just that.

But while the measure has failed to gain traction in Congress, other states are taking note, according to the National Conference of State Legislatures.

Hawai’i also passed a law this year expanding a pilot program to require that all statewide elections be conducted by mail beginning with the 2020 primary election.