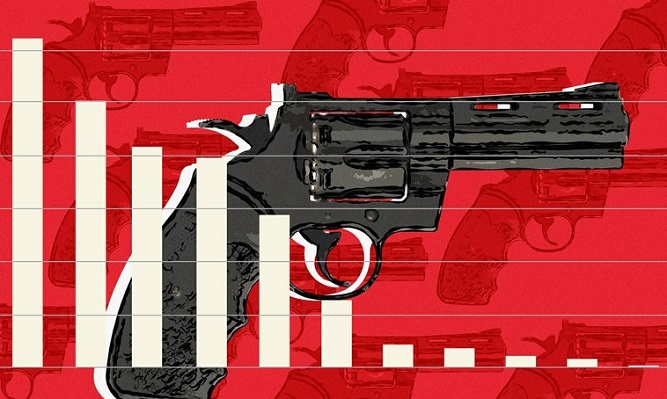 The California Department of Justice took a call about a 21-year-old man threatening to shoot his co-workers after being fired from his job. A search of his home uncovered 400 rounds of ammunition.

And a 24-year-old California man with a history of alcohol and drug abuse told his mother he was going to kill employees and relatives in the family business, and then himself by shooting or bombing. His uncle closed the business the next day and three days later called police, who confiscated 26 firearms, including 18 semiautomatic pistols.

In both instances, which occurred between 2016 and 2018, court-issued extreme risk protection orders  allowed law enforcement to step in and temporarily remove the men’s weapons.

These so-called red-flag orders, which family members or police can ask a judge to issue to help prevent mass shootings or suicides, are examples of the kinds of gun policies coming out of the work research scientists are doing across the country.

Almost unseen and against the backdrop of a raging gun control debate, their work is being funded, not by the federal government, but increasingly by private and individual donors and—most recently—a handful of states.

It’s all rooted in a basic premise: To address the nation’s gun violence problem, we must first understand it.

“For the first time in our history, everybody sees firearm violence as a problem that could personally affect them,” says Garen Wintemute, a recognized national authority on the epidemiology of firearm violence and professor of emergency medicine at University of California, Davis. “It’s no longer just people who live in places I don’t live or who don’t look like me,” he says. “It’s people like me.”

Wintemute directs the Firearm Violence Research Center and the Violence Prevention Research Program at UC Davis and helped draft California’s protective order statute, the first in the nation. Buttressed by the fact that nearly 80 percent of the perpetuators of mass public shootings make explicit threats, the policy has been adopted in 17 states and is the subject of bipartisan legislation in Congress.

“We have lost an entire generation of research on gun violence to a two-decade long political stalemate.”

The fact that his home state of California, with some of the nation’s lowest gun ownership rates, also has one of its lowest gun-death rates and most aggressive gun laws, is in no small part because of the scientist’s three decades of research work.

Mass shootings, he says, have focused public attention on a public health crisis that kills more than 100 people a day.

This summer, after shootings in Dayton, Ohio, and El Paso, Texas, one-third of adults in an American Psychological Association survey said the fear of mass shootings stops them from going to certain places and events. At the same time, Amnesty International issued a travel advisory warning visitors to be “extra vigilant,” “wary of the ubiquity of firearms among the population,” and to avoid places where large numbers of people gather. The organization calls gun violence in the U.S. a human rights crisis.

The deadly roll call of the mass killings, culminating with the slaughter of 27 children and adults at Sandy Hook Elementary School, made 2012 a watershed year.

Firearm violence went from being a law enforcement problem of the “inner-city” to a public health crisis that could affect anyone, anywhere.

“We can say that 2012 did set us off in a new direction,” Wintemute says. “And since then, the conversation, the level of concern kind of intensified, it’s become possible to get more research funding.”

But the problem remains much bigger than the response. “There’s still almost no federal funding for research, which is one of the reasons that states and private foundations have stepped up,” he says.

The federal government was essentially barred from funding firearm violence research in 1996 after Congress passed the Dickey Amendment, prohibiting federal funds from being used to “advocate or promote gun control.”

Between 1996 and 2018, Centers for Disease Control and Prevention funding for gun injury prevention fell by 94 percent. Among the 30 leading causes of death, firearm violence ranks 29th for the amount of federal funding dedicated to research—only ahead of accidental falls.

Last year, after the Parkland school shooting, Congress clarified that the ban did not apply to all gun violence research, but it earmarked no extra money for research.

So with limited financial help from a few donors and federal agencies, such as the National Institutes of Health and National Institute for Justice, scientists such as Wintemute and others at places like Northeastern, Duke and John Hopkins universities and elsewhere, largely agnostic to the politics of guns, were left to operate mostly on shoestring budgets.

That began to change after the mass shootings of 2012.

In 2018, the Laura and John Arnold Foundation, a subsidiary of Arnold Ventures, created the National Collaborative on Gun Violence Research backed by $20 million, an amount “of the scope that we’d ordinarily expect to see from the federal government,” Wintemute points out.

The National Collaborative is funding 17 research projects to explore the impact of gun violence—from suicides and officer-involved shootings to firearm safety.

“We have lost an entire generation of research on gun violence to a two-decade long political stalemate,” says Asheley Van Ness, who as director of criminal justice leads gun violence research work at Arnold Ventures.

“We need scientific research to point the way toward effective interventions that save lives and protect Second Amendment rights, because solutions to the gun violence epidemic can do both,” she says. “And we need this research now, at a scale commensurate to the problem.”

States offer up funds for research

Left to confront the damage of mass shootings, states are also investing in the search for answers.

In 2018, New Jersey added $2 million in its state budget to establish the New Jersey Center of Gun Violence Research at Rutgers University.

And earlier this year, the state of Washington approved $1 million over two years for researchers at the Harborview Injury Prevention Research Center to study risk factors associated with gun deaths and injuries, evaluate gun laws, and develop strategies to reduce the firearm death toll.

Ali Rowhani-Rahbar, co-director of the Firearm Injury & Policy Research Program and director of the Research Core at Harborview, says firearm laws and policies have tremendous nuance that can affect their overall effectiveness.

“How many times have you heard of a mass shooting that occurred because of a failed background check or some loophole?” he asks.

“We need research not only to inform the creation of new policies, but also to inform what is going on right now in terms of the policies already in place. There are many unanswered questions as it relates to the policy arena in this area of work.”

Back in 2017, for example, Wintemute, studied Washington’s and Colorado’s comprehensive background check policies and found they’d had little measurable effect—likely explained by lack of both compliance and enforcement.

Rowhani-Rahbar says Harborview is grateful for the state funding, which will allow researchers to “scratch the surface to get some urgent answers.” But in the long term, he says, broader federal government support is vital.

“Think of the other leading causes of death in this country: cancer, cardiovascular disease, not to mention motor vehicle collisions … that have been decreasing in terms of trends over time,” he says.

“That was not possible until we had a major commitment to support broad and sustained research over a period of time. A very large program of research with a much broader scope and over a longer period of time is needed for us to reduce the toll of the crisis of gun violence.”

California became the first state to fund gun violence research when it established the Firearm Violence Research Center in 2016. By then, Wintemute had been doing the work for more than three decades, at times using his own money to finance it.

The $5 million in state funds over five years allow the new research center to build on work already being done at the Violence Prevention Research Program next door. California’s 8% gun death rate, one of the lowest rates in the country, benefited from the aggregate impact of the state’s many gun policies, many of which resulted from the doctor’s research.

With an eye toward affecting state policy, Wintemute and his team are continuing to examine some of the many unanswered questions around firearm violence.

For example, they are preparing to study the many ways people are exposed to firearm violence and its consequences. “Not just ‘have you been shot, but has someone in your family been shot? Has your neighbor committed suicide? Was firearm violence a part of the soundtrack in the background where you grew up?’” Wintemute explains.

“My guess is by the time we add up all the ways people can be exposed to firearm violence, it will turn out to be that pretty much everybody is.”

A 2017 article, in which the doctor advocated for other doctors to ask their patients about access to guns and counsel them on the dangers, grew into a national movement after getting a boost from the most unlikely place. The National Rifle Association, a regular Wintemute critic, had tweeted that the doctors should “Stay in their lane,” to which the doctors tweeted back, “#ThisIsOurLane.”

Now, California is prepared to fund the nation’s first statewide program to train doctors and other health professionals on how to incorporate firearm violence prevention into their clinical practice.

Wintemute believes that properly designed comprehensive background check policies, solid enforcement, and compliance, together with extreme risk protection orders, which in California are known as gun violence restraining orders, have the potential to save lives.

He and his team are now evaluating the effectiveness of California’s gun violence restraining orders’ statute by examining court records for orders issued between 2016 and 2018.

In an article in the Annals of Internal Medicine, Wintemute highlighted 21 cases his team examined, (including the two referenced above), noting that in none of the cases, which covered schools, workplaces, domestic and other situations, were the threatened shootings carried out.

No one knows whether violence would have occurred had the extreme risk protection orders  not been issued, Wintemute says in reference to the 21 cases in his team’s report. “But there’s at least the possibility that mass shootings are something we can take emergency action on and prevent.”