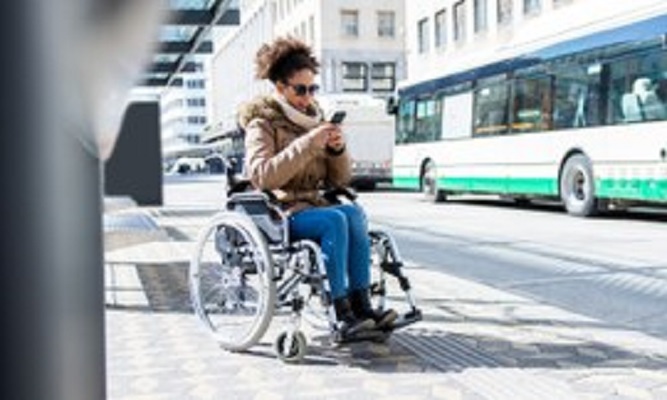 How Steep Is That Sidewalk? A Digital Map for People With Disabilities

Most people know about Seattle’s rain, but they’re surprised to learn that the city, especially the downtown area, is steeper than Denver, the “Mile High City.” Seattle’s hills can render many buildings and businesses, including places like City Hall, inaccessible to people with mobility needs.

For those people, apps such as Google Maps are not especially helpful because they show only the fastest way to get from point A to point B; nonmotorized routes are usually calculated based on the assumption that people will be on foot and can get into any entrance. They don’t take into account the angle of the hill needed to negotiate, whether there’s a curb cut, or whether there’s an alternate entrance that’s more easily accessible to people who use wheelchairs, walking sticks, or service animals.

For the nearly 50,000 Seattle residents who live with disabilities and are younger than 65, not to mention the roughly 90,000 who are older than 65 and are more likely to face mobility challenges, getting around the city is a constant challenge with few easy remedies.

“We were quickly hooked on the idea of contributing to the accessibility of the city,” said Nick Bolten, a developer of website and mobile app AccessMap Seattle, which was conceived in March 2015 during a city-sponsored gathering for data-based transportation solutions. Bolten and his Hack the Commute teammates were awarded first place at the event.

“It presented such a huge opportunity to make a tangible improvement in the lives of members” of the disabled community, he said.

On the app, which is free, users can find streets color-coded for steepness (green for flat, yellow for moderate, and red for steep), and the locations of curb cuts, bus stops, and elevators, as well as construction sites, which tend to sprawl and block crosswalks and sidewalks. When discerning steepness, users can select from predetermined settings for “wheelchair,” “powered,” “cane” or “custom,” which allows users to set the maximum uphill and downhill steepness for their needs.

Beta versions of the app allowed users to input problems they found along their routes, such as missing curb ramps, potholes, or broken sidewalks, and now the team is working with OpenStreetMap, an open-source project where users collaborate to make a free, editable map of the world, to create new and easier editing tools for users to do that.

Bolten and his teammates are partnering with Anat Caspi, director of The Taskar Center for Accessible Technology at the University of Washington, to further develop the app. Caspi has helped the team understand the many problems experienced by people with mobility concerns. Caspi does not identify as having disabilities but has always been concerned about inclusion.

“She started telling us about accessibility issues in Seattle,” Bolton said, “and we settled on this idea of helping people with limited mobility get around the sidewalks.”

Turns out, getting good data on mobility and developing a template for other cities isn’t easy.

Getting good data on mobility and developing a template for other cities isn’t easy.

The AccessMap team has found data from the Seattle Department of Transportation to be inaccurate or incomplete, particularly regarding curb ramp locations. That’s largely because of funding: City and county taxes still tend to benefit drivers and freeways, not pedestrians or mass transit, and budget cuts often limit municipal governments to large-scale planning and infrastructure projects, like for bridges and freeway on-ramps. Plus, when legislation is proposed to redirect spending, drivers can put up a fight.

The diversity of disability also complicates data collection: A map of sidewalks, curb cuts, or steepness of streets might not be sufficient for those with limited mobility. For example, are there major cracks in the sidewalk because of disrepair, tree roots, or other damage? Does the sidewalk slope at an angle dangerous to wheelchair users? To source such varying data, the AccessMap team is considering GPS navigation app Waze as a model.

People with disabilities who commute are more likely to rely on public transit and accessible design like curb ramps and door openers to enter buildings. Not having those services or amenities in their daily lives reinforces obstacles those with disabilities already face—in terms of equal access to the built environment, but also in terms of employment, housing, and services.

AccessMap is still in the development stage. Although one user tweeted about its “hiccups” interfacing with Google’s TalkBack screen reader, there’s not enough data yet on the app’s usability to gauge its efficacy or limitations. Eventually, the team hopes, it could benefit those with mobility limitations who navigate Seattle, especially those without knowledge of the city’s lesser-known accessible routes. And it could also benefit the larger public by producing data to drive forward discussions of access and ability.