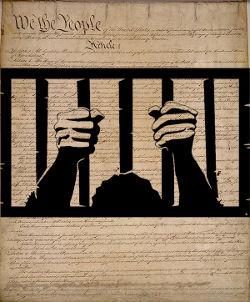 How to Make a Criminal

How to Make a Criminal-A Recipe

So you want to make a criminal? Well, here’s a simple recipe for you. Of course you must assemble all the ingredients first. Also, you have to know that no matter how careful you stir and mix and how careful you are of the oven temperature, it could turn out that you have made a normal, rule-abiding citizen. That’s the nature of the best, not everyone who is baked like this turns out to be a criminal
Ingredients:

• A culture that creates socio-economic disadvantage
• A family structure that increases stress from an early age
• A community that encourages selfishness, law-breaking and violence
• A school that fails its students
• A brain that is delicate and poorly self-regulated
• A criminal justice system that focuses on punishment

Now, here is how to actually do the cooking:

Socio-economic disadvantage is created. It does not arise from nothing. It requires a governmental policy, either covert or overt, that facilitates multi-generational disadvantage in the form of chronic unemployment, lack of adequate housing, dependency on social welfare benefits, lack of proper playgrounds and inadequate childcare facilities for young children. You need a government run by people of privilege who have been successful in business and industry, spent their lives looking down on those who didn’t get a chance to climb the ladder and a coterie of talk-shop addicts who do nothing whilst at the same time talk about doing everything. Once you have this at hand you can move on to step two. You also need a child protection system that is an utter failure in every way.

It helps to have absent father figures. Of course there is some preliminary preparation necessary in order to achieve this. You have to have a social structure that rewards young men for “conquering” your women; you need a strong locker room culture to say nasty things about women and to encourage sexual adventure. Once that is in place you can happily understand that a young man who fathers a child won’t bother to parent the child.

It is also helpful to throw in two spoonfuls of alcohol and drug usage. Nothing sweetens the family soup more elegantly than substance abuse. It provides and ensures that everything else needed in the family structure will be present. This includes a generous dollop of chaos and irregularity in parenting and caring for children, neglect and occasional or regular abuse. When we have assured that the children are reared in an atmosphere of chronic stress in which their emotional needs are never met, we can be fairly sure we have succeeded in mixing up the family ingredients satisfactorily.

Nothing succeeds better in creating lawlessness and violence better than a community that is riddled with both ingredients. Living in chaos, inside the family and in the community, is one of the best ways to grow a criminal. All you need to do is to assure that children will witness, on a regular basis, violent verbal arguments and threats, physical altercations, gross disrespect of the Police and fire brigade and you will have succeeded. You need a community that has poor early educational opportunities so that children grow up with an impoverished vocabulary to modulate their emotions. Add a generous amount of inadequate monitoring and mentoring of children by members of the community and you have gone even further in creating a criminal. It isn’t easy to accomplish this on your own and we have already noted the important role of government in the process.

Probably the best single ingredient is a failing school. You need one that is under-resourced, that ignores the developmental needs of the young people it is charged with serving and one that has under-performing teachers. If it’s a secondary school you must ensure that at least one fifth of the teachers are harsh, critical, unforgiving, lacking in a sense of humour and who will publicly chastise students for even the most trivial of misbehaviour. You must also ensure that students who have disabilities such as ADHD, emotional and behavioural disturbance are blamed for the conditions they have. Finger pointing is important in the school. Blame the victim, blame the parents, blame the family and don’t forget to say the nastiest things possible about them in the staff room so that a poisoned atmosphere has been created.

This is a hard one but not impossible to mix properly. If all the above conditions have been met all you really need is to add a vulnerable brain. Preferably one that has been injured at birth by maternal substance abuse, stress caused by a violent father to a mother carrying the child, difficult birth circumstances and a strong family history of emotional/behavioural difficulties. This will assure that you have a brain that is poorly self-regulated, prone to extremes of anger and aggression and unable to modulate its impulses. You must also have a brain that can’t postpone gratification (that is often best assured by giving the child everything they want when they want it), can’t tolerate frustration and can’t pay attention or concentrate properly.

It is important to assure that this system focuses on punishment and incarceration, provides little to no opportunity to rehabilitate the offender and warehouses them in primitive, harsh conditions in which they can learn to be better criminals. It is also important to assure that some criminals are more advantaged than others, for example, make sure that white-collar crime goes largely unpunished and that even trivial blue-collar crimes receive harsh punishment and, if possible, combined with public humiliation in the media. You also need overwhelmed judges whose case loads are unmanageable. You require a police forced that is understaffed and under-resourced. It helps if you create a policing system that is impossible to manage effectively and that is constantly under criticism in the media. A police force with low morale is a useful tool in the overall recipe.

What to do next

Well, we have the ingredients mixed and ready to go into the oven. The rest is easy. Or is it? As I said at the beginning, a large and not insignificant number of people who have been put into the mix don’t end up being criminals, lead lives of quiet dignity and self respect and make a valuable contribution to the community. So we can never be sure exactly how the recipe will cook. Having said that, we will be more than 50% successful if we have been careful and the end result will be a wonderful specimen of criminality, either minor or major, violent or non-violent and we will all pay the high cost of serving up our delicacy to the public.