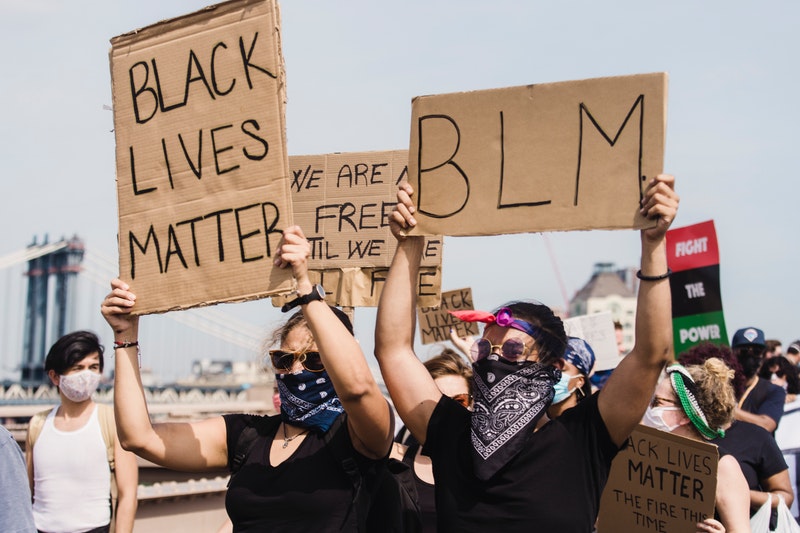 Instead of demonising Black Lives Matter protesters, leaders must act on their calls for racial justice

The intensification of the Black Lives Matter movement in the US in recent months has led to radical reform and action.

The police officers responsible for the killing of George Floyd were all charged with serious offences, including one with second-degree murder. The city of Minneapolis voted to replace its police force with a “new system of public safety”, while other cities have slashed their police budgets.

Demands for judicial and police reform in Australia

The BLM and Stop First Nations Deaths in Custody protests across Australia since early June have similarly called for charges against police officers and prison guards responsible for deaths in custody, as well as an end to racialised police violence.

Another major protest is scheduled for today in Sydney amid warnings from Prime Minister Scott Morrison that demonstrators would be breaking the law by attending after organisers lost their appeal to overturn the Supreme Court ruling blocking it.

Organisers offered to call it off if Premier Gladys Berejiklian committed to an investigation into the 2015 death of Aboriginal prisoner David Dungay Jr.

we cannot be silent while police violence is unchecked and continues to kill our people.

There has also been a push to implement the 339 recommendations of the almost 30-year-old Royal Commission into Aboriginal Deaths in Custody, which call for the use of arrest and imprisonment as a last resort, safer police and prison practices, independent investigations into deaths in custody and Aboriginal self-determination.

In recent decades, however, governments have defunded many First Nations organisations and programs that would enable successful implementation of these recommendations.

While there has been no movement on these larger structural issues just yet, the BLM protests have resulted in smaller victories.

This month, the South Australian government committed to funding a custody notification service to ensure all Aboriginal people who enter police custody have access to a call to the Aboriginal Legal Services.

This service was recommended by the royal commission and has saved First Nations lives in other states and territories.

Another victory has been the initiation of a NSW parliamentary inquiry into how First Nations deaths in custody are investigated.

Yet, these targets have not yet reined in police powers and the discriminatory over-policing of First Nations adults and children.

Overwhelmingly, the Commonwealth and state governments have responded to the BLM protests in Australia with condemnation.

Police commissioners and political leaders in several states have sought to block protests to prevent the spread of coronavirus, threatening arrests and issuing fines.

NSW Police Minister David Elliott said of the move to push ahead with today’s rally,

it’s actually arrogance and it’s probably the most dangerous act that anybody could do during a pandemic is organise a mass gathering.

Government leaders say they understand the “cause” and support the BLM movement, but not the means.

Yet, they still have not responded to the movement’s demands for mitigating police violence against First Nations people.

In fact, when police attacks on Aboriginal people have been captured on phone cameras and televised in recent months, they have been defended by the police, commissioners and ministers.

There have been at least five First Nations deaths in custody this year, with two in the last month alone.

There are also increasing concerns for the lives of First Nations people in prisons as COVID-19 has begun to spread in institutions and youth detention centres in Victoria.

What it will take to bring systemic change

Urgent and systemic change is required to claw back decades of extended police powers in NSW under the Law Enforcement Powers and Responsibilities Act and redress the lack of accountability for the 438 First Nations deaths in custody since 1991 and the 99 deaths investigated by the royal commission.

However, there are internal and external factors preventing this type of structural change.

On the one hand, the police have considerable power in Australia to influence decision-making at the parliamentary level and the way the tabloid media report on policing. The police unions also run active campaigns to defend officers charged in deaths in custody cases.

On the other hand, there has been a national silence about racialised police violence and deaths in custody of First Nations people. Gomeroi scholar Alison Whittaker describes this silence as embedded in “colonisation and white supremacy”.

The BLM movement has stimulated critical discussions in Australia on racial injustice and how First Nations people have challenged and resisted racialised policing and custodial practices.

It has also opened up conversations on the historic role of the police in the assimilation, enslavement and massacre of First Nations peoples. These practices have disrupted First Nations cultures, laws, families, connections to Country, languages, health and well-being.

This is precisely why a holistic, nationwide truth-telling process is so critical to hold the police to account for enforcing policies to eliminate First Nations people – in the past and today. We must decolonise our legal system to remove assumptions about the central role of the police in managing First Nations communities.

Truth-telling is not a one-off event, but a process of ongoing exchange. This requires reforming the education system: for instance, by emphasising diversity and cultural competency in the law and justice programs that produce the next generation of police and legal professionals. It also requires a commitment to independent investigations for deaths in custody and police violence.

Truth-telling can be a mechanism for structural change and reparations, as well. This requires resetting police strategies to reduce their disproportionate surveillance of First Nations people and ensuring police accountability.

Enacting policies, such as the NSW Police Aboriginal Strategic Direction 2018-2023 to improve relationships between officers and Aboriginal communities, is meaningless if Aboriginal people are still being disproportionately stopped and searched as part of police detection targets.

In the absence of truth-telling processes, police accountability and government commitments to de-centre the police from the lives of First Nations people, the BLM street protests will continue. It’s the only way for First Nations people and their allies to be heard, to educate and to elevate calls for justice.