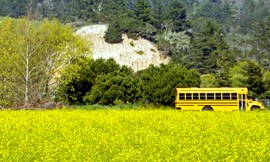 The rains came down sideways. We had one hour to get our first new “skoolie”—a school bus converted into a tiny house on wheels—out of the construction yard and into its new home at an RV park. We needed to get Betsy the Wonder Bus plugged into power, test the hot water heater and get the fire going in the brand new wood stove.

This would be its first night as a home for an unsheltered family. Made by our newly minted nonprofit, Vehicles for Changes, Betsy rolled down the highway to its new space at the Jackson Wellsprings RV Park just outside of Ashland, in the southernmost tip of Oregon.

Everything worked as we checked it off: stove and oven, kitchen sink, shower tile set, toilet flushed. The air was warm, the beds made. Eight months of drilling, hammering, pounding, lifting, and straining had paid off. In a gravel lot, we had created a complete house, downsized to fit in the footprint of a school bus.

I struggled to keep my emotions in check. Getting this home completed—from raising the money, designing and working with our builder, Cody Armond, and keeping the flame lit—took a year of intense, unshakable determination.

The Floods—David, Jennifer, and their children, Raylee, 10, David Jr., 8, and Noah, 16 months—moved in. “We’re very excited. It’s going to be so nice to lay down and stretch out all night,” Jennifer told me, smiling. David nodded and expressed how he believes skoolies could be part of the solution to housing homeless families. “It’s sure working for us. We can’t believe our luck.”

While there’s a growing movement amid skyrocketing housing prices to transform school buses into homes, appropriating them to shelter the homeless, as we are doing, is still unique. Ours is the only nonprofit we know of housing children this way.

The Floods’ rent had gone up and David had lost his job—that was about all it took for the family to end up homeless. They had been living in their car for seven months, roaming parking lots for places to sleep. “We didn’t think it would happen to us—but it did,” David  tells me while standing outside his new skoolie home. “It’s not just the uneducated. I’m finishing my master’s degree. I had nowhere to work, so the skoolie enables me to get it done. I’m so relieved.”

Building homes for unsheltered kids and families wasn’t so much an aspiration as a necessity. In Oregon, where we convert school buses into homes, there are more than 22,000 unsheltered students, according to the state Department of Education. And a report by Wallet Hub ties Oregon with California, Nevada, and the District of Columbia as having the nation’s highest homeless rate for children and youth.

Behind the statistics are real kids trying to live in tents under freeways, in campsites, in the back seats of cars in winter, and attend school. Their parents cannot cook them meals, and they rarely get a full night’s sleep—having to move every few hours because there are few places where it’s legal to sleep in your car.

I began researching and covering the rise in homelessness on the West Coast three years ago. Children are living in states of hunger, trauma, and sleeplessness to the point of psychosis. Overwhelmed parents move from agency to church to nonprofit trying to get their kids under a roof. Many are on waiting lists three years long for subsidized housing. Nearly every major city and many small towns—from Seattle through Los Angeles—are grappling with record numbers of homeless because of rising rents and wages that don’t keep pace.

So, I founded a nonprofit and recruited a team to convert school buses into fully functioning, attractive 240-square-foot tiny houses on wheels for homeless children and their parents. It took eight months from demolition to completion and roughly $32,000 to finish Betsy the Wonder Bus.

To qualify, parents need to be sober, nonviolent, have income to pay the RV space rent, and be willing to contribute to the communities where they live. We take care of the rest.

We find an RV park willing to take them. We maintain the home as “landlords.” If, after a year, they want to buy the skoolie, then we offer a sliding scale, interest-free payment plan. That money goes back into the nonprofit to build more homes. The idea is to move families off the streets permanently.

Interior of the “skoolie”. Photo by Julie Akins.

And here’s the thing—the idea of living in a skoolie that you can build and own for $30,000 has been trending for years among students and young professionals who don’t want to get trapped in a day job, paying off a mortgage all their lives.

Skoolie Nation, a Facebook page that offers advice to those building and living in converted buses, predicts several thousand new homes coming on line every year. So, this home we’re offering unsheltered families is among the fresh new ideas of the upwardly mobile. We hope that continues so our families aren’t further stigmatized.

Besides being cool, living small is good for the planet. We hope to go fully solar on our next bus conversion. Skoolies take up far less space than a 2,000-square-foot home. By creating them, we’re recycling. There are roughly 480,000 school buses across the country carrying 25 million children every day, according to the American School Bus Council. The buses are retired after 12 years, leaving 3,000 to 5,000 per month being decommissioned, destined for auctions or the junk heap. Our buses are donated by public school districts; they are safety tested and have low mileage.

Building skoolies as a solution to homelessness is so much faster and less expensive than other options. They require no permit, zoning change, land acquisition or interfacing with bureaucracy. It costs between $25,000 and $35,000 to create one, depending on how it’s equipped.

They’re practical. They are mobile so that a family can take their home with them when they get a new job or relocate, which eliminates the need for deposits and extra rental fees in their new location.

On top of all that, they’re fun to create. The rounded roofs, large and abundant windows, and generous length and width all make these converted buses a great canvas for the artistically inclined. I spent weeks looking at photos and videos and flagging down people living in them to request tours to get design ideas.

Most builders want to leave in as many windows as they can for brightness. Insulation and sealing around windows is important. Most skoolies have wood-burning stoves to keep the bus warm and dry. Condensation in a bus can lead to mold, so keeping that fire drying out the home is important.

Using the ceiling as a way of decorating is popular. We had to experiment with how to bend our decorative trim and molding to follow the curves of the ceiling. Builder Armond’s pro tip: Get it hot without melting it. (The results were stunning!)

Recycling or upcycling is the way of the skoolie community. We tore apart free, untreated pallets for our room dividers and scored whatever we could from Habitat for Humanity stores. Clever ways of creating storage is huge, while leaving as much open space as possible.

Because our first bus is not off-grid like some others are, meaning it must be connected to an outside source for power, water, and sewer, we were able to wire it traditionally. We had it plumbed that way, too. That’s the other advantage of skoolies—they’re fully equipped with kitchens, bathrooms, showers, running water, and electricity.

We have two school buses we’ll start converting in February. Matilda and Alexis will follow the template of Betsy: reliable, clean, and fully capable of caring for a family with children—the perfect destiny for a school bus.