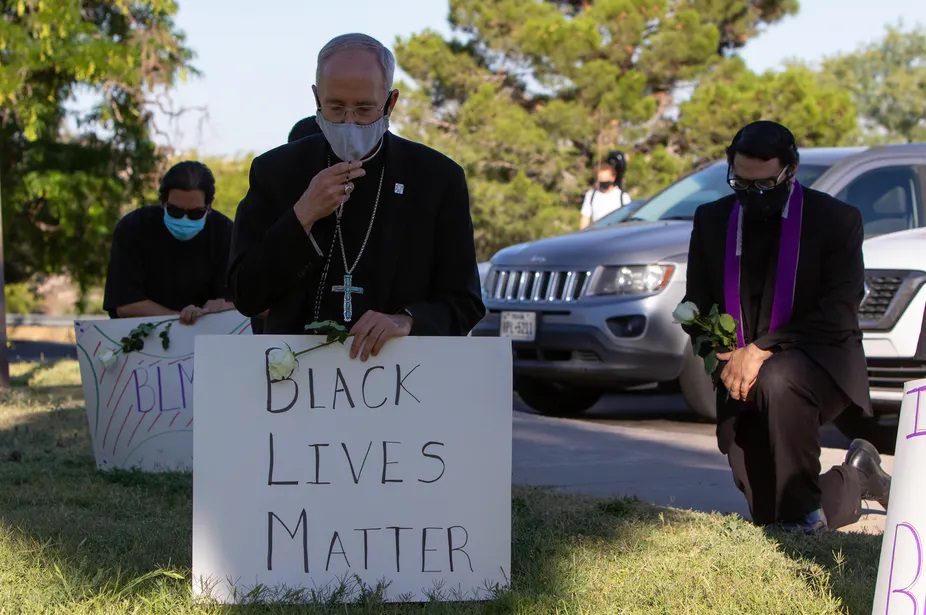 No justice, no peace: Why Catholic priests are kneeling with George Floyd protesters

Two days after the Catholic bishop of El Paso, Mark Seitz, knelt with a dozen other priests in a silent prayer for George Floyd holding a “Black Lives Matter” sign, he received a phone call from Pope Francis.

In an earlier era Seitz, the first known Catholic bishop to join the anti-racism protests spurred by Floyd’s killing, might have expected censure from the Vatican, which is often associated with social conservatism.

Days earlier Pope Francis had posted a message to Americans on the Vatican’s website saying he “witnessed with great concern the disturbing social unrest” in the United States and calling Floyd’s death “tragic.”

“My friends,” he wrote, “we cannot tolerate or turn a blind eye to racism and exclusion in any form and yet claim to defend the sacredness of every human life.”

Francis is seen as a progressive pope, but these are not isolated examples of his personal values. As a scholar of religion and politics, I recognize that both Steitz’s actions and the pope’s approval reflect a distinctive commitment to social justice that has entered the Catholic mainstream over the past 50 years.

This commitment has transformed a millennia-old Catholic tradition of valuing peace over justice.

Writing in the chaos surrounding the fall of the Roman Empire, the prominent fifth-century theologian St. Augustine asserted that peace was the greatest good humans can attain on Earth. While both peace and justice are valuable, Augustine believed, peace – meaning civil order – takes priority. He thought justice could not be sustained amid violence.

Many bishops, priests and theologians since Augustine have used similar arguments to criticize social changes and legitimize the status quo, insisting that the faithful should bear worldly injustices and seek their reward in heaven. This moral theology provided justification for the church to ally with economic, political and military elites, from medieval kings to Latin American dictators.

That began to change with the Second Vatican Council of 1962 to 1965, which brought together bishops from around the world to reevaluate the church’s role in modern society. The council’s final document sided firmly with social justice.

Inverting Augustine’s thinking, Catholic bishops asserted that peace cannot “be reduced to the maintenance of a balance of power between enemies.” The only way to achieve lasting peace, they asserted, was to address the sources of unrest.

Liberation at any cost

Pope Paul’s rhetoric echoed a core principle of liberation theology, a Catholic movement that was emerging from Latin America around the same time.

Liberation theologians see violence not as an individual flaw but as a feature of unjust social or political structures. This “institutionalized violence,” as the Peruvian theologian Gustavo Gutiérrez termed it, is the root cause of all violence – including government repression and popular uprisings against that repression.

The best way to avoid violence, as the Archbishop Oscar Romero of El Salvador wrote in 1979, is “to guarantee a truly democratic state, one that defends the fundamental rights of all its citizens, based on a just economic order.”

Liberation theologians believe that those seeking change should employ peaceful methods whenever possible. But when nonviolent protests and legislative channels prove fruitless or are met with violence, new tactics might be necessary.

“The church cannot state, in a simplistic fashion, that it condemns every kind of violence,” Romero wrote.

Romero criticized Salvadoran “moderates” who saw violence on both sides of the country’s civil war as equally wrong, implying a moral equality between those who uphold injustices and those who challenge them. The church, he insisted, must side with the victims of institutionalized violence.

This principle, known as the “preferential option for the poor,” guided Bishop Seitz’s decision to protest in El Paso.

“When religion becomes stagnant, we can forget that the Word always comes to us crucified and powerless,” Seitz told the National Catholic Reporter on June 4 to explain his silent protest. In Christian tradition, “the Word” refers to Jesus, the word of God incarnate.

Seitz then cited the prominent midcentury theologian James Cone, who said U.S. Christians must fight for racial justice because, “In America, the Word comes tortured, black and lynched.”

This isn’t the first time Seitz has sided with society’s most marginalized. In March 2019, he apologized to migrants for their treatment at the U.S.-Texas border.

“To say…that black lives matter is just another way of repeating something we in the United States seem to so often forget,” Seitz continued: “That God has a special love for the forgotten and oppressed.”