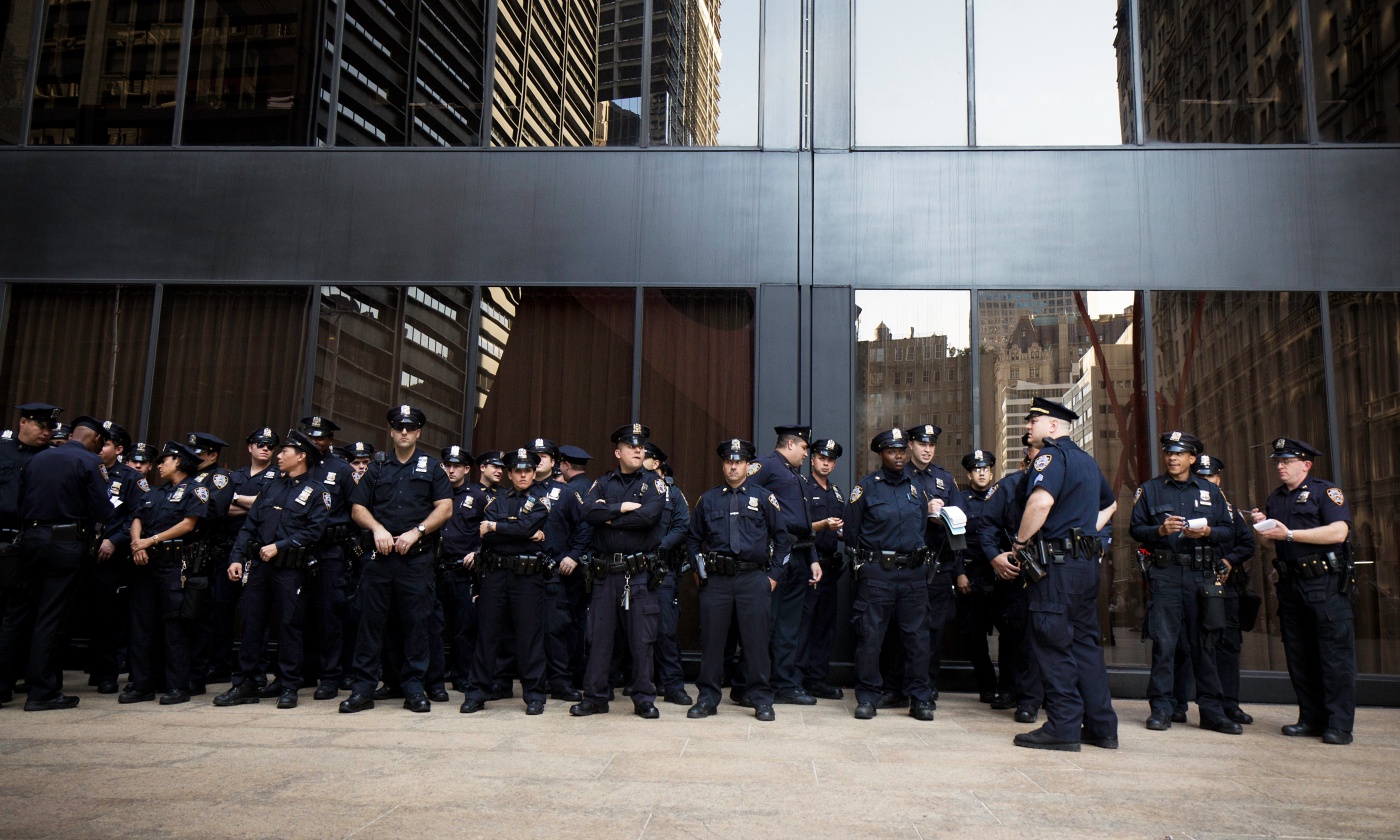 The Black and the Blue: Tackling Police Racism and Abuse on a Systemic Level

An African American law enforcement expert finds hope in the firing of a racist police chief.

Sixty miles south of my home is a small municipality in New Jersey called Bordentown Township. The population is 11,367, according to the 2010 U.S. Census. Two very important things happened there in 2016. One alarmed me; the other gave me hope. The first was the arrest of the town’s former police chief, Frank Nucera Jr., who had just stepped down after years on the force. Nucera was charged by the FBI with committing a federal hate crime and violating a person’s civil rights while he was chief. Nucera, I would learn, is a confirmed racist. Once, when discussing a situation where he believed an African American had slashed the tires on a patrol cruiser, he told a fellow officer, “I wish that nigger would come back from Trenton and give me a reason to put my hands on him. I’m tired of ’em. These niggers are like ISIS. They have no value. They should line them all up and mow ’em down. I’d like to be on the firing squad. I could do it.”

According to taped conversations, Nucera routinely made such statements to his officers, referring to African Americans as “niggers,” “nigs,” and “moulinyans,” an Italian slang for nigger. He liked to intimidate local African Americans by positioning police dogs at the gymnasium entrance during high school basketball games or by having his officers walk the dogs through predominantly Black apartment units. If his officers weren’t tough enough, he’d lead by example. When a Black 18-year-old and his 16-year-old girlfriend were being arrested for allegedly failing to pay a hotel bill even as they swam in the hotel’s pool, Nucera approached the male teenager from behind, grabbed his head, and slammed it into a metal doorjamb. “I’m fucking tired of them, man,” he said after the incident. “I’ll tell you what, it’s gonna get to the point where I could shoot one of these motherfuckers. And that nigger bitch lady [the 16-year-old’s aunt], she almost got it.”

I have known lots of New Jersey police chiefs. I was a member of the New Jersey State Association of Chiefs of Police. I knew incompetent chiefs, corrupt chiefs in New Jersey and other states, as well. Still, I was stunned that someone as morally and intellectually bankrupt as Nucera could have headed a police department in New Jersey, or any state for that matter, in these times. It would be easy to say Nucera was a bad cop, an aberration that fortunately has been excised from the law enforcement body, but who he is and what he was speaks to the explicit or tacit approval of racism and bias by mayors, city officials, and other police officers who have worked with officers like him. Nucera had been a member of the Bordentown Police Department for years. He was promoted through the ranks to become chief. Consequently, in all those years, his racism was no secret to those who worked with him day to day. In the end, it was even rewarded. His rise to the position of chief is disheartening.

I was stunned that someone as morally and intellectually bankrupt as Nucera could have headed a police department in New Jersey, or any state for that matter, in these times.

Still, as sickened as I was by Nucera, there was a wrinkle of hope: his arrest. It made me think that maybe, just maybe, we are ready to rid our departments of noxious cops, dangerous police behaviors, and bad police policies that put people in danger and do a disservice to all Americans. Nucera, it turns out, was done in by one of his own men. A White police officer in his department was so offended by his racism that he went to the FBI and agreed to secretly record his conversations. Those recordings led to his arrest. The courageous officer’s actions hint at a relatively small but significant attitudinal shift among individual officers.

That shift communicates a new attitude in law enforcement: that we recognize the role police have historically played as oppressors and occupiers of African American communities, and we want to change that relationship. President Barack Obama began the dialogue when he convened law enforcement from across the country to develop a guide for policing in the 21st century. Terrence Cunningham, however, as head of the International Association of Chiefs of Police in 2016, signaled to law enforcement officers everywhere that its leadership decided it is time for a change.

“There have been times when law enforcement officers, because of the laws enacted by federal, state, and local governments, have been the face of oppression for far too many of our fellow citizens,” he told his 16,000 members in San Diego. “The laws adopted by our society have required police officers to perform many unpalatable tasks, such as ensuring legalized discrimination or even denying the basic rights of citizenship to many of our fellow Americans. While this is no longer the case, this dark side of our shared history has created a multigenerational—almost inherited—mistrust between many communities of color and their law enforcement agencies. We must forge a path that allows us to move beyond our history and identify common solutions to better protect our communities. For our part, the first step in this process is for law enforcement and the IACP to acknowledge and apologize for the actions of the past and the role that our profession has played in society’s historical mistreatment of communities of color.”

Despite Cunningham’s statement, cops like Nucera prove, unfortunately, the past is not always past. Nor does his statement soothe the pain of the families of victims of police shootings and abuse such as Walter Scott, Philando Castile, Alton Sterling, Tamir Rice, Laquan McDonald, Eric Garner, Freddie Gray, and Sandra Bland, or of Fred Watson and his children. Still, it’s refreshing to have law enforcement acknowledge past misdeeds regarding African American and Latino communities and point toward a new direction in police behavior. Additionally, some police departments, in most cases prodded by U.S. Justice Department consent decrees after an individual police officer’s action revealed systemic abuse, are moving toward a system of law enforcement, in which police officers are judged by how many people they positively serve, rather than solely by how many arrests they make and how many summonses they issue.

What departments are discovering is that while, yes, there are bad police officers, the real problem is bad systems—inadequate training, reward, and promotion issues; lack of community engagement; and mismatched expectations between what patrol officers see as their jobs and what the communities see as the police officers’ responsibility. Organizations and groups like Black Lives Matter have pushed the conversation forward by focusing all of us on the centuries-old problem of Black men and women, girls and boys being routinely disrespected, discounted, harassed, jailed, and shot down indiscriminately by police.

But if Black lives matter, all of them must matter, not only the ones whose lives are snuffed out by police. If Michael Brown’s life mattered, then so did Richard Jordan III, a 10-year-old who loved to play football and was slain in a drive-by shooting in Memphis, Tennessee, at 4:30 p.m. on Nov. 13, 2017, while in a car with his family; and 1-year-old Robin Keefer, who was fatally shot four days before Richard Jordan, also in Memphis, as she played in her family’s apartment; and Robin Keefer’s 2-year-old sister, Laylah Washington, shot and killed five months earlier, also in another drive-by.

What departments are discovering is that while, yes, there are bad police officers, the real problem is bad systems.

After years in law enforcement, cops become immune to most things. Still, I always knew that one day there would be something I encountered that would shake me—some case, some murder, some thing that would burrow into my psyche and stay with me for the rest of my life. That event would be my personal reckoning. It came on a hot summer evening in 2006, not long before I moved to Newark. Four friends—Terrance Aeriel, 18, Natasha Aeriel, his 19-year-old sister, Dashon Harvey, 20, and Iofemi Hightower, 20—had gathered on Saturday, Aug. 5, in the playground of Mount Vernon High School, located in a middle-class Newark suburb. At around 11:30 p.m., a group of men approached them as they played music. And then the horror began. Natasha Aeriel was shot first, collapsing from a bullet to the face near a set of bleachers. The other three were then marched behind a low wall for what would be the last seconds of lives that had hardly begun. They were forced to kneel and then were shot one by one, execution-style. Natasha survived.

The incident made national news. The suspects were ultimately caught. I was in charge of the ATF’s Denver Division when it happened. The news hit me harder than some, because the murders struck close to home. Three of the victims were students at Delaware State University, my alma mater, and the other one had applied to go there. Three of them were in the university’s marching band, the DSU Approaching Storm, the same school band that played during halftime at my football games while the other players and I were in the locker room preparing for the second half. One of them guided prospective students around Delaware State as an ambassador for the university. They were good kids; kids with hope and purpose. It was so senseless. A gang initiation.

Shortly after I arrived in my new post in New Jersey, I was conducting a special briefing for some of my supervisors just a year after the murders. As part of the briefing, we were shown the crime scene photos. Their dead faces peered back at me from the photographs flashed across the screen, and my heart broke. Those Black lives mattered, too. They mattered to me and their families and their friends and the teachers and advisers at their schools and their next-door neighbors. I couldn’t get those faces out of my head. They haunted me. In response, I set up the Horace Foundation Endowment for Criminal Justice Studies at Delaware State University, which gives scholarships to students from northern New Jersey to study criminal justice. I’m not rich, so people sometimes ask me why I started a scholarship fund. In response, I quote a song by one of my favorite artists: