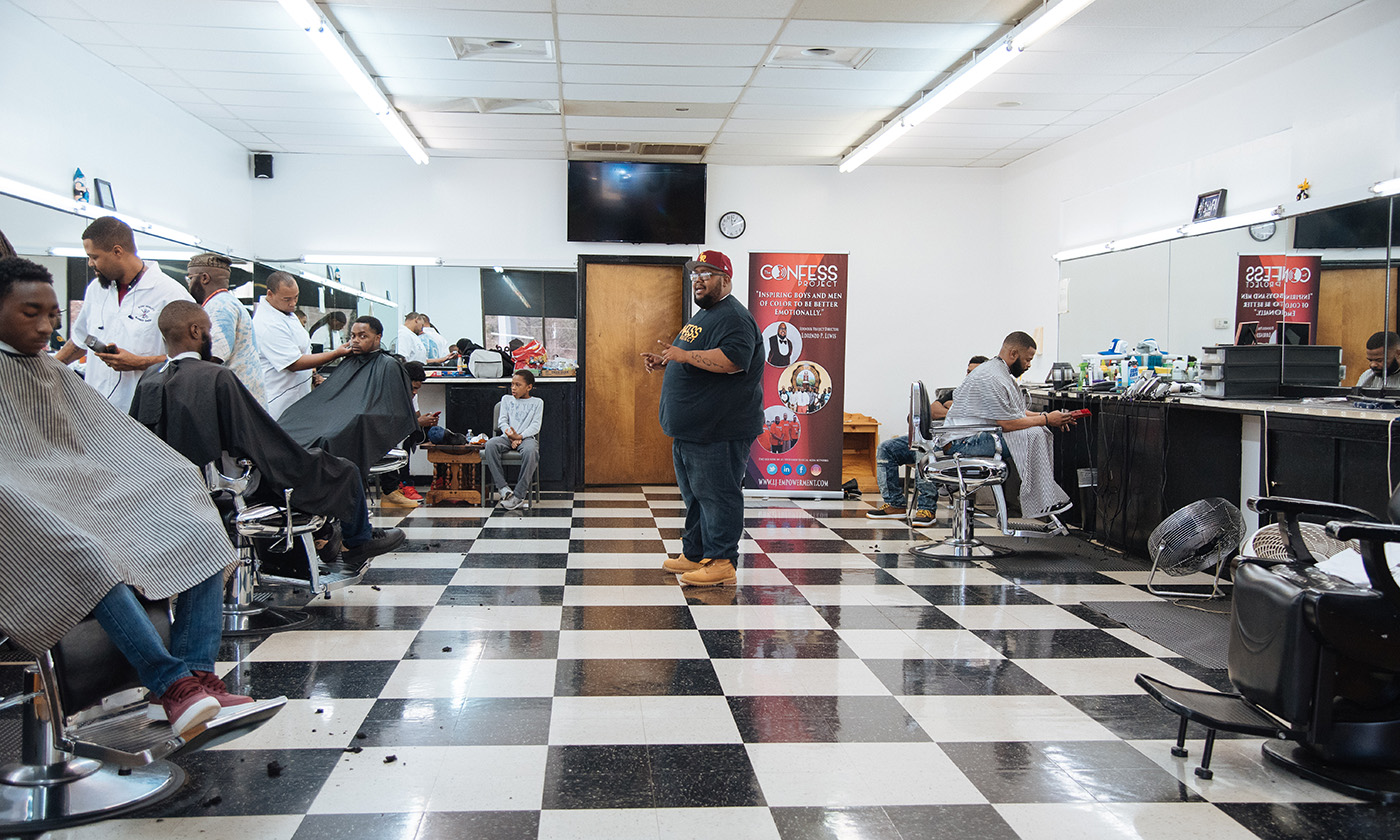 What Is Barbershop Therapy?

August 24, 2018
Barbers in the South are training as first responders to assist the men in their chairs with their mental health concerns.

Amid the sound of television and hair clippers buzzing around him at Goodfellas Barbershop in Little Rock, Arkansas, Lorenzo Lewis was trying to get a man wearing a mask to talk about his emotional pain.

Lewis asked the man how he was doing. “I’m good, I’m good,” he responded. Lewis said how he’d noticed he seemed on edge recently. Same response. Lewis kept asking questions until the man eventually took off his mask. “I’m hurting,” he said. “I’m just really going through something right now.” When asked if he was feeling suicidal, the man nodded.

Lewis is founder of The Confess Project, a mental health initiative for boys and men of color. His demonstration was attempting to show barbers and their clients how men hold in their pain—and how to break through.

Why do it in a barbershop?

The barbershop in the Black community has historically been a safe, nonjudgmental space for men to talk about anything—sports, politics, religion, women, manhood. The 90-minute conversations about mental health, called Beyond the Shop, are an opportunity to deepen sharing that is already happening, Lewis says. The initiative is similar to New York City-based Barbershop Books and the Black Barbershop Health Outreach Program in Inglewood, California, which focuses on hypertension prevention.

Through an interactive format, Beyond the Shop aims not only to help Black boys and men confess their vulnerabilities and give them resources to begin a healthier way of living, but also to show barbers how they can be mental health advocates, too.

For Black men, seeking help can be difficult, an effect of stigma that Beyond the Shop is hoping to erase.

“At the barbershop, guys are already outspoken and opinionated, but we don’t tend to talk about self-care and the things that make sure we’re around for our kids and future generations,” says Sam Johnson, a Beyond the Shop participant in Louisville, Kentucky. “The biggest thing I took away was checking on my brothers. We’re so quick to say, ‘Man up,’ when I really should be asking more questions and letting him know that if he needs help, I’m here.”

The Beyond the Shop initiative aims not only to help Black boys and men confess their vulnerabilities and give them resources to begin a healthier way of living, but also to show barbers how they can be mental health advocates, too. Photo by Santanna Hayes.

The numbers are telling: Black people more frequently have post-traumatic stress disorder than other ethnic groups. Yet Black men are less likely to get treatment than the general population, according to the Centers for Disease Control and Prevention and National Alliance on Mental Illness. There’s a lack of mental health awareness. Disproportionate access to health care. Increased exposure to violence. Distrust and misdiagnosis due to the lack of culturally competent care.

Lewis’ approach with Beyond the Shop is modeling vulnerability through storytelling. He draws empathy from his own story.

Born in jail to an incarcerated mother, Lewis struggled with depression, anxiety, and anger throughout his youth. At 17, involved with a gang, he turned it around. Reaching out for support from family and friends was key, as was professional help. “I was in bad relationships, and not able to get along with others. I had a horrible time getting girlfriends, and when I did, I didn’t know how to treat them right because I’d been through so much trauma,” he told the men in Goodfellas. “I started realizing, maybe I need some therapy.”

Since starting The Confess Project in 2016, he’s facilitated mental health awareness sessions for thousands around the country—from national universities and organizations, including NAMI, to local health fairs and high schools. He draws from his experience of working in behavioral health facilities in Little Rock for over a decade, where he underwent training in suicide prevention and cognitive-behavioral psychotherapy.

At Goodfellas, the men were apprehensive at first about Lewis interrupting their haircuts. They didn’t know what to think of him—or the strange mask the man was wearing, to illustrate how men hide their emotions.

But the men in the shop did start talking. One man spoke about the pain of being separated from his children and the stress of child support. Another admitted how he turned to unhealthy outlets to cope with working menial jobs. Heads nodded. In the next chair over, a man talked about the anger and fear that come with being pulled over by police. A common thread was how society treats Black men.

“Our mental illness is criminalized. You take a person not of color that goes in and shoots up a school and automatically the response is, ‘He’s mentally ill.’ When a person of color does anything remotely like that, not that we even do, he’s a thug,” says Dr. Karen Mathis, psychotherapist in Little Rock. “But I think we would rather be labeled a thug than mentally ill. Why? Because it’s a sign of weakness. And we don’t want to appear weak.”

Mental illness in the U.S. carries a stigma. For the Black community, especially for men, Lewis says, that stigma is manifold and gets in the way of asking for help.

At the end of Beyond the Shop, along with holistic ideas for self-care and information on suicide prevention, Lewis provides information on local support groups and culturally competent therapists. Black mental health professionals make up only 2.6 percent of the field, according to the American Psychological Association. And therapy can also be a financial barrier for many.

That’s where barbers step in.

“Now, once I see the hints they’re throwing out there that they need to talk, I’ll open the door up for discussion.”

Barbers learn how to help the men in their chairs—from recognizing that lack of eye contact might be a sign of depression to being comfortable asking someone if they’re suicidal (this can be the best way to identify risk, according to the National Institute of Mental Health). They can point to resources in the community.

“I feel more able to help somebody,” says JJ Harness, owner of Broski Barbershop in Little Rock. “Now, once I see the hints they’re throwing out there that they need to talk, I’ll open the door up for discussion.”

Increasingly, communities are starting to see the need to equip unlikely first responders to better recognize health concerns in the people they interact with on a daily basis. Librarians in Sacramento, California, for example, underwent “mental health first aid” training at the beginning of the year to be able to identify issues in the homeless people who come through their doors and point them to help. In Duluth, Minnesota, a community-wide effort trains everyone from neighbors to business owners to support people living with Alzheimer’s and other forms of dementia. Baristas double as mental health aides in a new coffee shop in Chicago that’s openly committed to mental health awareness and suicide prevention.

Since the initial pilot in Little Rock, Lewis has taken Beyond the Shop to five other barbershops in cities across the South: Louisville, Kentucky; Memphis, Tennessee; Columbia, South Carolina; Atlanta; and, most recently, New Orleans. Response to Beyond the Shop conversations overall has been positive. A survey of participants even showed 58 percent would be more prone to seek treatment if a therapist was located in the barbershop.

In Louisville, a city that saw its highest ever homicide rates in the past two years, 40 people, including the mayor, showed up at The Campus Barber Shop in January. Representatives from the Louisville Urban League and Metro United Way also came. Men openly shared their stories and offered each other advice.

Shortly after the event, owner J. “Divine” Alexander went to a homeless shelter to volunteer his barber services. He met a man there who was without a job and feeling down. Alexander, who struggles with depression himself, has been more open with others since the talk. He gave the man a haircut and a beard trim and at the same time encouraged him to seek help. A few months later, the man came into his barbershop—employed and ready to become a regular.

He credited Alexander for the turnaround. “He was like, ‘Yeah, man, it all started with a haircut and a conversation to do better.’”