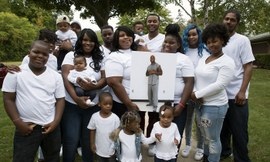 What Is the Real Cost of Mass Incarceration?

When documentary producers first approached Beverly Walker about featuring her family in a film, the Milwaukee mother and grandmother knew what that meant: cameras trailing them, her cherished privacy breached.

But her husband, Baron Walker, by then having served nearly two decades of a 60-year sentence, saw an opportunity.

“I thought it could be quite helpful, though at the moment I didn’t know to what extent,” says Baron, who had been sentenced in 1996 for being party to a pair of bank robberies. “In prison you have no voice…. This movie, I realized, could be that voice…”

Baron Walker couldn’t have known then that it would eventually lead to his release.

Milwaukee 53206 is an hourlong film demonstrating how the human cost of mass incarceration plays out in one devastated ZIP code in Wisconsin’s largest city. The film illustrates the toll on children, spouses, and entire communities by telling the Walker family story; of Baron Walker’s effort to remain connected to them while still in prison, helping the children with their homework, researching employment leads and medical problems for family members, while they marked life’s important milestones without him, serving time right along with him.

Keith McQuirter, who directed the documentary, says, “With so many families living with the impact of incarceration, it was important to find real stories that allow a rare glimpse into how incarceration impacts family systems and the community at large.”

New York-based Odyssey Impact, which uses documentaries like these to provoke social change around issues from poverty to gun violence, last year launched a social justice impact campaign around Milwaukee 53206 and the plague of mass incarceration.

The idea was to leverage the power of story and film to not only educate people but inspire them to take action for change, says Melissa Potter, head of Social Impact and Communications at Odyssey.

62 percent of men who live in the zip code spend time in prison by the age of 34.

Odyssey partnered with faith groups and secular nonprofits across the country to engage audiences, providing templates for conversations and a toolkit to help families share their experiences.

The campaign included more than 200 screenings of the film, in public parks and on college campuses, before correctional ministries and law enforcement. Its partners sponsored community forums for meaningful dialogue around mass incarceration. Ordinary people got involved, creating and signing petitions and writing letters to urge reform.

In Milwaukee, a local church arranged for a bus to take members and their families on regular visits to prisons, making it convenient for those who had lost touch with relatives on the inside.

And in August, attorney Craig Mastantuono, who had heard the family’s story, took on Baron Walker’s case pro-bono and helped to secure his release after 22 years.

“That was our hope, but it wasn’t our focus,” Potter says. “This is the story of more than just one individual … but [of] tens of thousands of men and women across the country.”

Among its many recognitions, Milwaukee 53206 was named Best Documentary at the Urbanworld Film Festival and earned the National Council on Crime and Delinquency’s Media for a Just Society Award. The film has been featured at more than a dozen film festivals and premiered on the World Channel series America Reframed.

Across Wisconsin, it has sparked new conversations around reform, and a prison and justice reform movement has been taking root, with political backing from both sides. Tommy Thompson, who was the state’s Republican governor from 1987 to 2001, recently apologized for his decades-ago role in the “hysteria” of locking up people.

In addition to incarceration, Milwaukee 53206 turned a spotlight on an area of the city long neglected by policy makers and politicians, say those who live there.

As the documentary reveals, 62 percent of men who live in the ZIP code spend time in prison by age 34. And the state, it points out, has the highest concentration of incarcerated Black men in the country.

“It has done a tremendous job of raising awareness and of exposing the issues and social ills and injustices.”

“It has done a tremendous job of raising awareness and of exposing the issues and social ills and injustices we are dealing with,” Dennis Walton says. The lifelong resident of the ZIP code is an activist who works with current convicts and ex-prisoners, and he appears in the film.

“The fact that attempts have begun to be made and so many people are trying to change the narrative is positive as well.”

Midwestern states like Wisconsin were hit particularly hard by the decline in the manufacturing industry in recent decades. Walton says it wiped out good-paying jobs for many people living in the poorest sections of the city, including the 53206 area. Gangs and drugs moved in to fill the resulting void, leaving an area on the verge of abandonment.

“Men were being incarcerated, and, as they were being removed from homes, that was destabilizing and dividing families and creating a void in the community,” says Walton, who discusses many of these social issues on his weekly radio program.

Through his organization, Made Men Worldwide, Walton works with formerly incarcerated men, providing a range of services to help them readjust once they’ve been released—from connecting them with children and families and obtaining driver’s licenses to finding employment and places to live.

In the documentary, Walton can be seen teaching a class on fatherhood to a group of inmates inside a prison. He says 98 percent of the men are fathers. “What’s the most confusing day in the ghetto?” he asks. “Father’s Day,” one of the men responds, saying that he grew up not knowing about that day because he never had a father in his life.

The 53206 ZIP code on the north end of Milwaukee is where Baron and Beverly Walker grew up, lived next door to each other, and fell in love.

Baron had hoped the film, which depicted the devastation of mass incarceration on his neighborhood, would also expose an unfair policy that was keeping him, and thousands of others like him, stuck in prison long after they were eligible for release.

While he had fulfilled all the requirements for parole by 2010, Baron had become subject to a radical change in Wisconsin’s parole policy after the election of Gov. Scott Walker, a crime and sentencing hard-liner.

As a result, he would fail to win parole six times before Mastantuono, his attorney, successfully requested a sentence modification that earned his eventual release.

He was among about 3,000 inmates in the state sentenced before 2000, when the state’s new Truth in Sentencing law took effect. One of the harshest in the country, it essentially abolished parole.

Up until that time, parole had been a built-in element of sentencing decisions, and Baron would have been considered for parole after he had served one-quarter of his 60 years. But the parole commission was consistently applying Truth in Sentencing guidelines to inmates like Baron convicted before 2000, essentially shutting off any opportunity for their release.

“There was nothing else Baron could have done to get out; he had met all the qualifications,” Beverly says. That he’d been transferred to a minimum-security facility and allowed to leave the prison for appointments, without handcuffs, showed the trust prison officials had placed in him. During his years inside, he had become a leader, teacher, and coach, earning certificates in such areas as food service and building maintenance.

But none of it appeared to be enough.

“I made a horrible decision; I was convicted due to fact that I made this decision,” Baron says. “I was required to serve a certain amount of time and meet certain requirements and then would be eligible for release. I did that. But for me and 3,000 other inmates—some of them there longer than I was—the rules changed.”

From the inside there was little he could do. So on the outside, Beverly Walker became her husband’s voice.

She familiarized herself with the confusing and confounding politics of the state’s sentencing and parole laws. She joined organizations committed to this work and began speaking out. She became a paralegal—and her family’s rock. In the film, she can be heard saying: “I’m definitely serving time.”

Beverly created a website, familydeferred.com, to tell Baron’s story and draw attention to the inherent unfairness in the sentencing laws that were affecting all those men—most of them Black.

In the weeks since he’s been out, Baron has enrolled in a leadership program and is volunteering his time to focus attention on the plight of those in similar situations inside.

And he’s been trying to catch up on 22 lost years. “I just got done watching Michael Jordan’s greatest dunks,” he says. “I’m going to the movie theater with reclining chairs now, paying $16 for a bag of popcorn.”

Cellphones are an endless fascination. “And my computer, I can do anything on it. My wife wants me to slow down, but I’m just so curious about everything on it.”