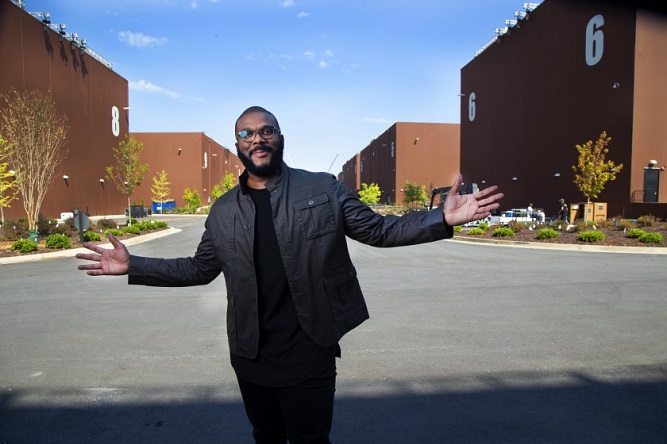 No matter how high Tyler Perry climbed up the ladder of Hollywood success, his past would not let him go.

Armed with a sharp, often raucous sensibility and a desire to craft entertainments anchored by melodrama, faith, love of family and an affection for black culture, Perry in the past few decades single-handedly built an empire of popular plays, movies and TV shows that established him as the most successful African American filmmaker in history. Supporting his work was a fiercely loyal, primarily African American audience, and his relentless drive — he produced, wrote, directed and often starred in his projects — was supplemented by his unwavering determination to maintain ownership and creative control of his brand.

But the sold-out auditoriums, top-grossing films and throngs of adoring fans brought Perry little comfort during those years. He was constantly haunted by the pain of his past as a young man growing up poor in the South. Even as he secured his status as a hit-maker, those memories — rats jumping out of silverware drawers and landing on his arm, white employers turning him down for jobs — were never far from his mind.

“I was running from poverty,” he explains. “When my mother got sick, I just wanted to do well enough to take care of her. I surpassed that, went farther than I ever thought I could financially, and still felt like I needed to run. I never felt like I was far enough away from it. It didn’t matter how much money I made. It’s like people who have gone through trauma or sadness never wanting to look back. That was me. At times, I found it was hard to breathe.”

This weekend, Perry arrives at a crossroads, prepared to vanquish those demons once and for all. At the same time, he will create a historic milestone for black Hollywood, while also bringing major firepower to Georgia’s blossoming film industry.

The mogul on Saturday will welcome more than 800 guests, including Oprah Winfrey, Denzel Washington, Whoopi Goldberg, Samuel L. Jackson, rising Democratic star Stacey Abrams and others to the latest incarnation of the 330-acre Tyler Perry Studios, with spacious grounds and state-of-the-art production facilities that have already made it one of the largest entertainment studios in the country.

One highlight of the celebration is the dedication of the studio’s centerpiece: 12 10,000- to 38,000-square-foot soundstages, each named after a groundbreaking black artist. The entertainers honored include Winfrey, Washington, Goldberg, Sidney Poitier, Will Smith, Halle Berry, Della Reese and director John Singleton, who passed away in April.

Says Perry, “I am paying tribute to people who have inspired me, who all paved a brick for me to be here. Denzel is the greatest actor of all time. Will Smith is the biggest movie star in the world. Of course there is Oprah, and all that she has meant to me. They’re all tremendously important to me. And John Singleton — I wish he could be here. But his mother will be here.” The entrance to Tyler Perry Studios in southwest Atlanta.

The complex is larger than Paramount, Warner Bros. and Walt Disney’s Burbank studios combined. Perry is the first African American to own a studio outright — no corporation or partners are involved in the venture. He even mapped out the plans for the complex on his own: “If I hadn’t gone into entertainment, I would have been an architect.”

Much of the studio, situated on the grounds of the former Ft. McPherson army base in southwest Atlanta, is already in operation, with productions ranging from “The Walking Dead,” the Neil Armstrong biopic “First Man,” Marvel’s “Black Panther” and “Pitch Perfect 3″ to all of Perry’s projects, including his TV series “The Haves and the Have Nots” and his films “Boo! A Madea Halloween” and its sequel, both starring Perry as his most popular character, the foul-mouthed, gun-toting grandmother Madea.

But the dedication of the soundstages and other surprises planned Saturday mark a new phase in Perry’s career, coming fast on the heels of his signing a major deal with Viacom, where he will produce comedies and dramas for BET and other Viacom networks. He and Viacom are also joining forces for a new streaming service, BET+, which will feature new projects from Perry as well as series and films from his library.

“To direct movies, to get acclaim and win all these awards is great, but there’s something more important than that. What changes everything is ownership.”

Leaning forward on the couch in his office, Perry says, “I never met a Warner brother. I never met Walt Disney. But to be one person and be a man of color is an accomplishment I feel really proud of. I hope it will set the example for other people of color, in every area but particularly in Hollywood. To direct movies, to get acclaim and win all these awards is great, but there’s something more important than that. What changes everything is ownership.”

Achieving his landmark goal was easier because the industry never understood what he represented, he says.

“Being underestimated was the greatest gift I ever had,” says Perry. “I was always able to make some really great deals because people had no idea of the following or the connection I have with my audience. Because that audience is black, it’s been ignored, for the most part. It’s not as valued as the mainstream audience. That’s what I’ve had to come to terms with. But the truth is, this place is because what that audience is able to do.

“African American fans, like country music fans, are die-hard people who are with you, ride or die,” he continues. “Black women especially. When they are with you, you can move heaven and Earth. They have been with me from day one.”

Phillana Williams, co-director of the Mayor’s Office of Film & Entertainment, called Perry a “pioneer who has brought and driven significant economic development to the city and state. “Tyler was really ahead of the game,” Williams said. “He had the foresight and the vision to see what Atlanta could be, helping us grow the industry here.” 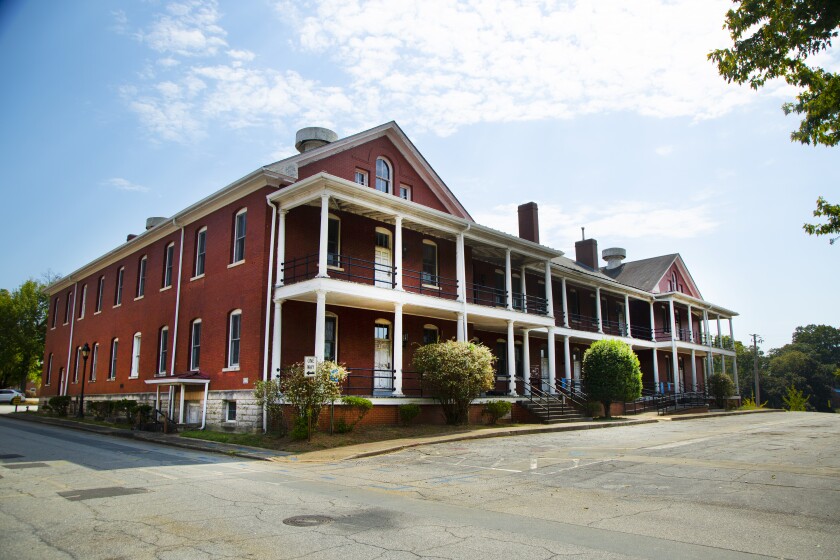 Perry’s pride in the studio is evident. Some nights when he is alone, he will hop into a Gator utility vehicle and cruise in the dark around his kingdom. He’ll pass by a nearly full-size replica of the White House, which is the setting for his upcoming Washington, D.C., drama, “The Oval.” He drives over acres of lush greenery, zipping by a modest structure that serves as Neil Armstrong’s house in “First Man.” He’ll amble around a community called “Maxineville,” named after his mother, who died in 2009 of complications from diabetes. The neighborhood is also the location for the house where Madea resided. (The character has been retired but may well return in the future, Perry says).

He’s not done with his plans. A future phase will include a six-lane highway running along the entire back of the property that could be used for filming. He also wants to build a backlot and restaurants.

“I want this to be a self-sustaining place where companies can come here and they don’t have to leave,” he says. And yes, he sees a future where fans would be able to go on tours.

But in realizing his dream, Perry has also had to confront the harsh reality of a potential boycott by Hollywood, which threatens Georgia’s robust film production industry. At issue is the state’s restrictive new abortion law, passed earlier this year. 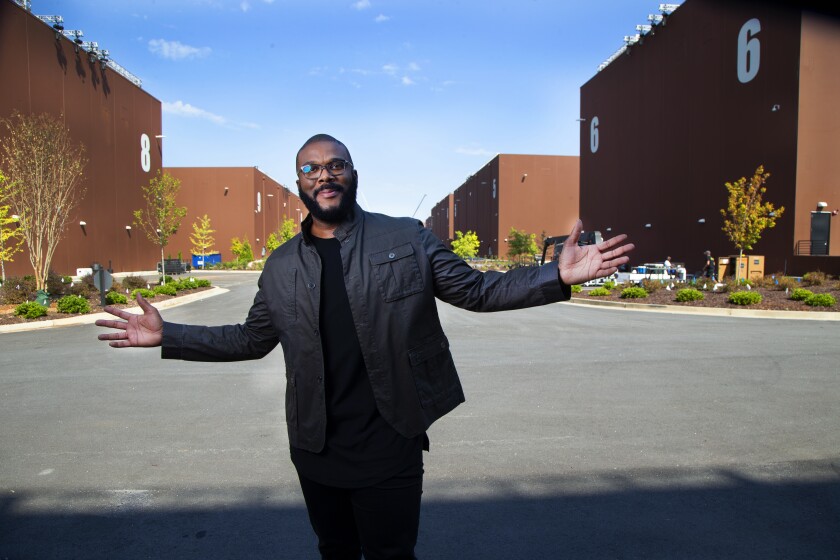 Tyler Perry shows off a few of the 12 soundstages at Tyler Perry Studios to be dedicated this weekend in homage to pioneering black artists.

“Here’s the problem,” Perry says, taking a deep breath. “This is home for me. This is the promised land. When I came here in 1992, I saw the hope and the opportunity. When you put $250 million in the ground, you just can’t up and leave because I don’t like what you’ve done. I feel badly for my counterparts in the city who have also put tons of money into building stages. But they don’t have the property, they don’t have the shows, they don’t have a Tyler Perry. I will be fine either way, but I am troubled that this could come along and disrupt everything I’ve worked so hard to build, along with a lot of other great people in this town. What’s stronger than a boycott is a vote.”

Perry’s attitude echoes that of many women in the film and television industry here, who responded to calls for a Hollywood boycott with a petition against such an action. “Please know this: Georgia’s hardworking women and many men in this industry will continue to be the resistance from the inside,” the petition said. “Your condemnation is understandable, but what we really need most is allies.” (Late Tuesday, a federal judge issued a preliminary injunction against the law, which would have banned abortion after the detection of a fetal heartbeat and was set to go into effect Jan. 1.)

For now, though, Perry is focused on the dedication, which is likely to be an emotional event. Asked how he thinks he will feel, he smiles.

“I fully intend to be in the moment,” he says. “I will be watching every face and expression.”

He reflects back to his memory of attending Winfrey’s Legends Ball in 2005, which honored 25 African American women from the arts and civil rights fields. Perry was a guest at the white-tie ball held during the three-day celebration.

“I remember when I left there, someone put a camera in my face and asked me what I thought,’ and I said, ‘I’m going to leave here dreaming bigger,’ he says. “If I can get five people to leave my party the way I felt after leaving Oprah’s, I will have succeeded.”